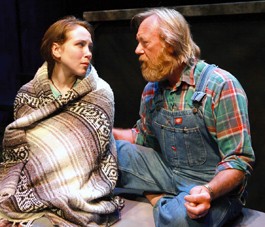 Back to the Commune

Zayd Dohrn knows what it’s like to grow up underground.

A fast-rising NYC playwright, Dohrn is the son of real-life radicals Bill Ayers and Bernadine Dohrn, who were thrust into the spotlight last year in a media scuffle about candidate Obama’s supposed collegial relations with Ayers, a cofounder with Dohrn and others, of the militant Weather Underground organization.

The younger Dohrn lived his early life in hiding with his parents after a notorious 1970 incident in which a bomb blast killed two other WU members in a New York apartment. Dohrn’s parents, now professors at the University of Illinois, assumed false identities for years, eluding the FBI and, for a period of time in the late ’70s, making their home at a sprawling Northern California commune called Magic Forest Farm.

In his newest work for the stage, Dohrn (Sick, Haymarket) has returned to the commune with a play titled, appropriately enough, Magic Forest Farm. The atmospheric drama—an earlier version of which won Marin Theatre Company’s annual Sky Cooper award in 2007—has just opened in its world premier production under the direction of MTC’s producing director Ryan Rilette. Since winning the Sky Cooper, the play has been through extensive revisions and workshops, and on this morning, the day after Magic Forest Farm’s first official preview, the show’s exuberant playwright and director are celebrating the culmination of a yearlong collaboration.

“It’s funny,” Dohrn says, “I was listening to the actors yesterday, when Ryan was giving notes after the preview, and one of them mentioned that, with one particular scene, it had taken her a long time to come around to performing it the way she initially, instinctively had wanted to do it. So everyone started talking about how, in the rehearsal process, you often end up having an idea, then going in another direction, and finally coming back around to what you wanted in the first place. That’s exactly what it’s been like for me in developing this play.”

Not strictly autobiographical, though definitely inspired by Dohrn’s various post-commune musings, the play follows a young San Diego woman named Allegra (Laura Morache, last seen at MTC in My Children! My Africa! ), who begins to suspect that her barely remembered childhood on the Magic Forest Farm commune may have been less idyllic than her parents have led her to believe. In a search for answers, she returns to the commune for the 30-year reunion, and there reconnects with some of the other, now-grown commune kids.

The stellar cast includes Robert Sicular (last seen in The Seafarer), Julia Brothers, Anna Bullard, Avery Monsen and David Cramer, all of whom have been with the show since its staged reading last year as part of MTC’s Nu Werkz series.

“When I first set out to write this play,” Dohrn explains, “it looked a certain way in my mind. But then, through some of the early readings I did, the play gradually got pushed away from what I’d originally wanted it to be and became something else. So a lot of my process with Ryan has been, through work-shopping and many long conversations, to evolve the show back toward the play I’d first wanted it to be, to follow my original instincts. So now I think it’s back, but I realize that it also has so much more richness, too, because of all the other places it’s been on its way back home.”

“There are things in the script that took us both a while to understand,” Rilette adds, “that took a while for us to figure out how to use properly. In particular, in the earlier drafts of the play, there was much more of a sense of possible sexual abuse hanging over everything. The play had become about sexual abuse. There was a point when Zayd and I were in New York, and we were having lunch talking about it, and we realized that the real point of the sexual abuse stuff was really just to get the characters back to the commune. So Zayd went back and rewrote tons of that stuff. Today, it is a very different piece, a much stronger piece, I think.”

“It’s a funny thing about script development, the way these things evolve,” Dohrn muses. “You workshop a play with actors or invite people to readings of a play, and you are encouraged to make daring choices, to make dramatic changes so the actors have juicier things to explore. What happened early on with Magic Forest Farm is that it kept moving more in the direction of that question of whether there’d been sexual abuse in Allegra’s past. That question is certainly still an important aspect of the play, but I’d never really thought that was what the play was about.

“So a lot of what we’ve been doing over the last year is figuring out how to use that question—was there abuse or not?—as a way to make an entry into the play, to use it as a tool to crack open the world of the play and its characters.”

So what is Magic Forest Farm about?

“I always thought it was a play about generations,” Dohrn answers after a pause. “It’s about how kids eventually come to understand their parents, and then understand how their own lives are going to go forward in terms of that legacy. Specifically it’s about the way kids of the ’60s generation have repurposed the legacy of their parents.

“It’s also a piece about the differences between the nostalgia and loss felt by the parents who founded this commune,” Dohrn continues, “and the very different, oddly reversed sense of nostalgia and loss among the kids who grew up there.

“What I’m interested in are the ways that my generation and the kids who grew up on communes, the ways they view that legacy. What kinds of loss do they feel, as opposed to their parents, who really experienced it in the prime of their young adult lives? Each generation has a different way of looking back at that time, and this play explores the differences between those two different vantage points.”

“During rehearsals,” Rilette says, “we did a lot of research together. We watched a documentary called Commune, and we have lots and lots of books our dramaturge, Margot Melcon, had pulled together for us, books on the children of the counterculture, specifically those about growing up on a commune. And we have a great book from the actual Magic Forest Farm commune that has great photos of life on the commune. All of that led to some incredible conversations about the legacies of the 1960s—the good and the bad.”

According to Dohrn, the project has been of great interest to members of the real-life Magic Forest Farm, many of whom attended the stage reading last year. Not too surprisingly, they all had a lot to say.

“A whole lot of them came to the reading,” Dohrn laughs, “and I had many interesting conversations with them afterwards. I think a lot of them are planning to come back for the run of the show, so I’m sure I’ll get even more feedback. I’m looking forward to hearing what they think of what we’ve done with the play. I’m curious to see whether they think we’ve authentically captured life on the commune.”

As for his own memories of his time underground, Dohrn admits that he’s still got plenty to think about on his own journey to understand his past.

“I have a lot of really good memories and a lot of weird memories,” he says. “Some of my friends who spent a lot more time on communes have quite creepy memories. And yet I think everybody feels that there was something there that was worthwhile and special. Part of what the play is about is the question of whether there is something inherently unworkable about the commune system, or is there some way it could have been salvaged if people had made different choices.”

Rilette adds, “Ultimately, the message is that there are some really great things that can be taken from the ’60s, from radicalism, from life on the communes—but for those who’ve grown beyond it, you have to choose what to take away and what to leave back there.”