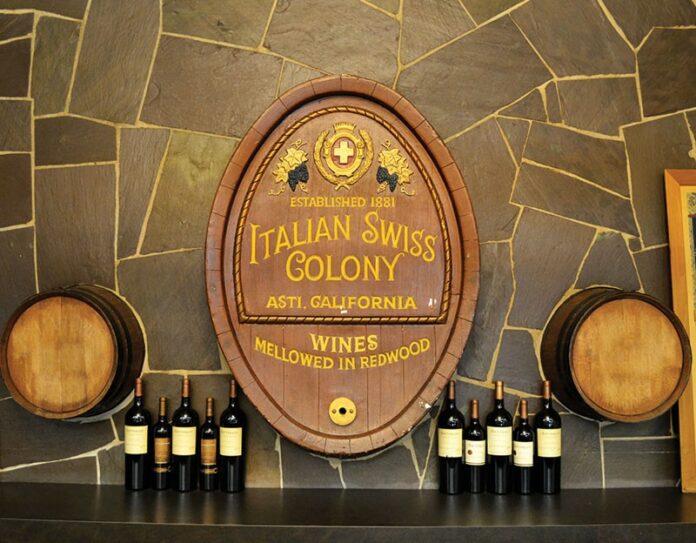 Like a hitherto hidden room revealed in a dream, the tasting room at Asti Winery feels both familiar and long forgotten. If it seems familiar to me, that’s because I visited four-plus years ago when the former Italian Swiss Colony tasting room, reputed to have been California’s second most popular tourist attraction during its heyday, was briefly reopened as Cellar No. 8 before being left to its one sepulchral inhabitant: a marble bust of a dotager cradling a straw fiasco of wine, “His Last Love.”

This weekend, you won’t have to journey into the subconscious to sip wine in this time capsule of a tasting room, now hip by attrition, where the taps flowed with wines “mellowed in redwood” until it was shuttered decades ago. On Friday, May 16, Asti Winery hosts the 17th annual Alexander Valley Winegrowers open house (the Bohemian is a sponsor of this event).

“This is the first ‘bottle shock,'” Collins says. Long before that Paris tasting of 1976, there was the prestigious Wine Exposition of 1911 in Turin, Italy. When the French got wind that the Americans would be competing, a prominent Parisian journal scoffed, “California has produced wines fit only for German troopers.” They weren’t laughing when the California upstart took home the exposition’s Grand Prix prize.

The Italian Swiss Agricultural Colony was founded in 1881 by Andrea Sbarbaro, a grocer from Genoa who became president of the Bank of Italy in San Francisco. “Sbarbaro was a marketing genius,” Collins says. As early as the 1890s, he was bringing trainloads of tourists up from San Francisco to taste wine and party by the Russian River. The parties on May 17 and 18 this year include barbecues, food trucks, photos booths and live music throughout Alexander Valley at participating wineries.