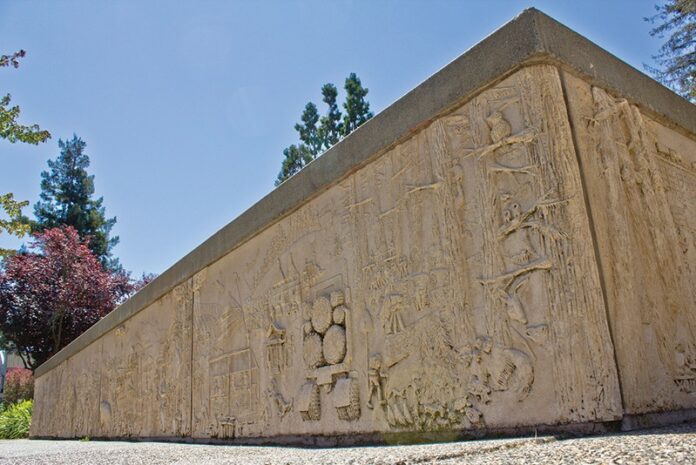 Ruth Asawa’s fountain in Santa Rosa’s Courthouse Square is such a landmark that it even has its own check-in page on Foursquare. Its exterior stone panels are a mural timeline of Santa Rosa up to 1987, created by the beloved Japanese-American artist who passed away this month. But a plan for the reunification of Courthouse Square shows the space without the fountain—and that has had some art lovers concerned.

“The fountain is to be obliterated as part of the reunification of Courthouse Square,” says Francie Aguilera in an email to the Bohemian. “It beautifully shows, as only Asawa could, the area’s history,” Aguilera continues. “This fountain is part of our cultural heritage.”

Not so fast, says Santa Rosa senior planner Erin Morris. Though the actual fountain would be demolished, Asawa’s art would remain intact. “The plan would be to put the three panels on a new freestanding wall near the fountain’s current location,” she says. The city is accepting public comment on the environmental impact report (EIR) through Sept. 16, including verbal comments at the Sept. 10 city council meeting. (The EIR is available for viewing on the city’s site.)

As for reunification of Courthouse Square, “this is an idea that’s been coming up since at least the late ’90s,” says Morris. “Finally, a few years ago, the city council decided to put money toward an EIR.” The project may be years away—but a vote on the EIR may take place as early as January 2014.

Santa Rosa councilwoman Julie Combs says she’s open to hearing what the public has to say about the plan. Any decisions, however, always include the bottom line. “Of course,” she says, “the final question is, ‘Where’s the money going to come from?'”