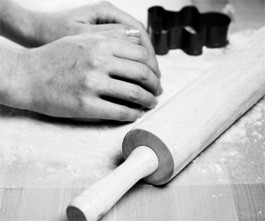 Napkin Notes: In which our man rips corporate organic, lousy homemade bread, kitchen appliances and the Slow Food movement--among others

Splitting his time between Guerneville and Manhattan, acclaimed consultant Clark Wolf graces these pages with the occasional diatribe from the periodic local.

I was gently chided recently when I suggested that artisan foods are a little bit like pornography as defined by the Supreme Court; that is, they may be hard to describe, but you know ’em when you see ’em.

Well, OK, that may be a stretch. But what do we do when a big kitchen equipment company spends large amounts on glossy ads for its new Artisan Mixer? Huh? I’m thinking that artisan machinery might include a wooden bowl and a flat rock. OK–and a stick or a millstone. Mortar and pestle anyone?

Back in the ’70s, when most of us associated the word “artisan” with a renaissance wood carver or a Berkeley hand-letter printer, the buzz word for gastro-swooning was “homemade.” These days, the very notion is almost laughable, if not illegal, when it comes to many commercially sold edibles. But back then, the h-word was invoked on countless menus, often able to illicit a tingle or a tear for those longing for even the vestigial warmth and safety of a grandmother’s kitchen that, for many, never really existed.

Today the a-word is yet another culturally endangered species. I suppose we can try to protect the word (and the notion) by calling out those who abuse it, especially when it’s used to profit some who may well threaten the economic viability of others. I really do want to enjoy great artisan cheeses, ales, jams, even some of that home-style, hearth-evoking “country” bread if it has nice flavor, or (as the bakery folks say) a good crumb and–another favorite Marion Cunningham phrase–“provides a pleasant chew.” I strongly support people and groups who take a careful gander, who sniff and chomp at foods before they pronounce, and who declare it so when valuable, painstaking efforts result in delicious stuffs to eat and drink.

But when people boast of helping a network of unnamed farmers by producing a tasty, if unnecessary, treat while they angle for a national contract with Whole Foods, I begin to wonder: Is this just 21st-century cocktail party chat? Will they “build the brand” (God, I hate that phrase) and then cash out, leaving farmland wreckage in their wake? Are they sure that Armani is the right look for the local farmers market?

This may be why one initially rather moving, well-intended so-called movement called Slow Food–begun as a demonstrable reaction to the arrival of the McDonald’s Happy Meal in Italy–has so mutated stateside. In Italy, it’s an argument about nuance, but the culture of food and wine works from a solid communal base. Here, one good and treasured idea comes up, and six people want to make it into a national chain. Funds are raised to preserve heirloom apples at expensive luncheons for overdressed dilettantes in a generic luxury setting, right near what might be an actual experience in an orchard in question. (It’s usually more fun to sit on the lawn with the staff, under a flowering bush.)

I hate to give them any more ink than they already get–even of the cranky sort–but I also have to mention the truly hateful experiences I’ve had in the Whole Foods in Sebastopol. Once a lovely local natural foods store called Food for Thought, this neo-corporate outpost is too small for WF’s usual footprint, and so much has been sacrificed in favor of house brands where, for me, a lot of the charm and value of the place once lived.

But the worst was the third week of last August, when E. coli-infused spinach was on everyone’s lips (talked about, not eaten) at a time when nearly anyone could have been buying not-in-a-bag local greens, except at the local Whole Foods. I mean, really, the third week of August? In North America? Whole Foods was under attack (thank you, Michael Pollan) for focusing more on its regional/national distribution centers than on local farmers, so it spent a boatload on–what else?–marketing and signs (plastic coated, thank you very much) to tout its “Local Seasonal” program. Yet at the height of harvest, it had just five local varieties out front and actually boasted of having “Local Heirloom Gravenstein Apples!” This, on a road called Gravenstein Highway. Big whoop, guys. (The call over the loud speaker to the staff to make sure that everything was “full and fresh at four” in readiness for the pre-dinner rush was just too lame to bear. I fled.)

As a recovering English major–more a semanticist than a grammarian; more interested in being understood than being correct–I really don’t mind a word like “artisan” having more than one popular meaning, as long as they all work well. As James Beard used to say, “For me, Gourmet is a magazine, not a person,” to which I’d add, “and gay can also sometimes just mean ‘cheery.'”

So let’s let the artisan step forward, wipe hands on apron and break into song, for all I care. And then let’s unplug the hype machine and lock it away.

Clark Wolf is the president of the Clark Wolf Company, specializing in food, restaurant and hospitality consulting.

Clark Wolf
Previous articleShaping Sonoma Grove
Next articleMe, You & Everybody