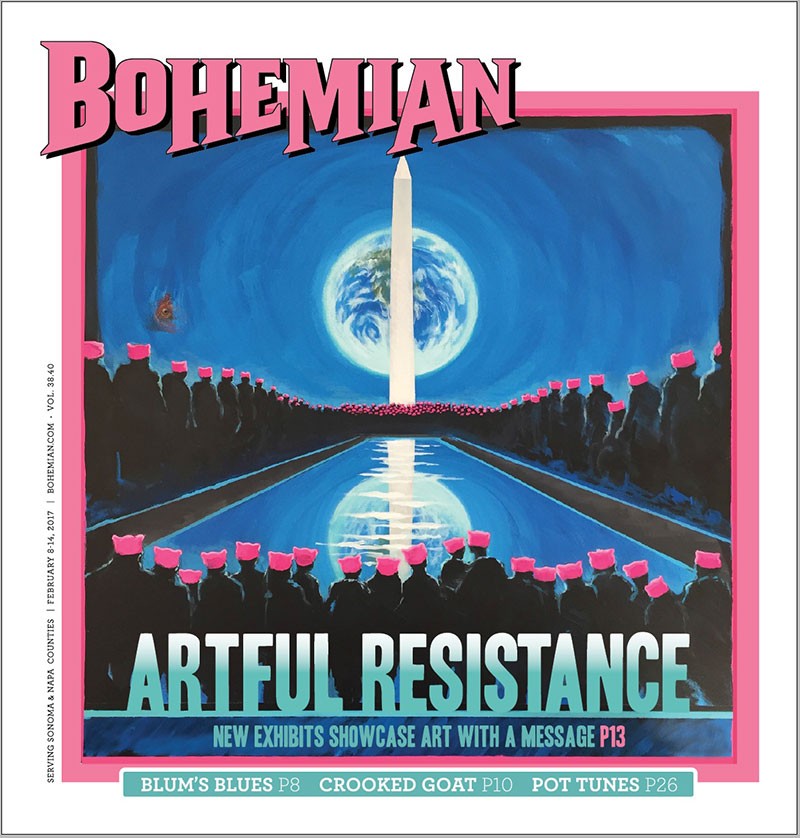 If there’s one upside to Donald Trump, it’s that he has spurred local artists to pick up their paintbrushes and pencils.

Edminster is an abstract acrylic painter and monotype printmaker whose Saltworkstudio is located in Backstreet Gallery in the SOFA arts district of Santa Rosa. She says Trump’s campaign of lies and capture of the White House has become a cultural climate change as deadly as rising sea levels.

Edminster and dozens of other artists in the North Bay rallied to produce new works of accessible, progressive and politically minded art. Edminster called upon more than 30 local artists to create new works on display at Backstreet Gallery’s “The Art of Resistance,” showing on Saturdays and by appointment through March 3.

“I thought we need some honest reactions,” she says. When she put the call out for political art, she wasn’t sure what would come in and she says the majority of pieces are not your typical political art.

That doesn’t mean the works in the exhibit are all flower-power images of peace and love. Some take a dark look into the hearts of those who refuse to help refugees, though many of the pieces try to find the light in the moment of darkness.

Edminster’s contribution to the show is Cash Cow, which tells the story of America’s corporate takeover through arresting visuals. A map of America is overlaid with splatters of color, and a striking image of a cow being led by a chain around its neck to depict the ways that America is being milked for all she’s worth.

Though Edminster and other artists involved in the show say emotions are raw and hope fleeting, “we’re all going to keep on creating art, any way we can. I feel that art is a battery that recharges people to do whatever it is they’re going to do,” she says. “It’s maybe an idealistic viewpoint, but, hey, we’re artists.”

THE TIME IS NOW

“This S___ Is Broken” is painted in thick black letters above a row of cuckoo clocks in Kristen Throop’s studio at Backstreet Gallery. Throop’s work is also featured in “The Art of Resistance.” Her latest works began as ruminations on time and over the past few months evolved to represent a very particular moment: now.

Throop works in series, taking a concept or idea that she says usually manifests in a dream or in her subconscious, and creates paintings and other works based on that idea over the course of a year or more. Her past series have included color-changing LED sculptures and ruminations on her own mortality.

Throop became fascinated with broken cuckoo clocks and made a connection between their classic aesthetic and fragile gears and mechanisms.

She began researching and sketching clocks and soon was buying old pieces off the internet with the intention of fixing them up. By the time the election came about last year, the broken timepieces took on a new dimension.

Displayed on Throop’s studio wall is a collection of these clocks, some beautifully designed but missing vital pieces, some only partially built, with exposed gears and springs. Rather than fix them, Throop started tagging each broken piece with the name of a branch of government or political institution.

“It just all came together for me in November,” says Throop. “It was always on some level political, but it became a lot clearer for me.”

Since the inauguration, Throop says “kookiness” has taken on a new aspect in her work. “I feel like we’re all inside something that’s so crazy,” she says.

Throop calls her new series a readymade installation, taking inspiration from the post-WWI art of the Dada movement. Rooted in avant-garde art circles in Europe and New York City in the early 20th century, Dadaists channeled the horror and meaninglessness and subversion they experienced into art often made with ordinary objects. One of the most famous examples of readymade art is Marcel Duchamp’s Fountain, a porcelain urinal.

Throop’s message is also a timely reminder to act in the moment, and she sees the clocks juxtaposing what the ancient Greeks called chronos, the personification of chronological time, with kairos, the moment of time itself—or as Throop puts it, the moment for action.

For Throop and other North Bay artists in the show, the driving imperative is a sense of solidarity within the community and the chance to start meaningful conversations. “I think it’s important to have someplace to put your energy, but we have to have art that people can connect to, that’s accessible,” she says. “That’s an important aspect of art, to be able to create meaning and allow people to synthesize that in some way. I think people are really hungry for this.”

“Like everyone else, I’m totally horrified by Trump, by the whole tenor of the thing,” says Dennis Calabi.

The conservator and director of the Calabi Gallery in Santa Rosa is especially chilled because he is a child of Holocaust refugees. “It feels so much like the horror stories I grew up with,” he says, “what it was like for my mother in Vienna and my father in Bologna, Italy.”

Calabi’s focus is on restoration and preservation. His gallery exhibits late-19th century and 20th century works, as well as current and local art. On Saturday, Feb. 18, Calabi Gallery opens a show titled “We Shall Overcome,” that looks at the art of defiance in the face of government corruption and corporate greed from the 1850s to today.

“I wanted to have a lot of historical material that shows a continuum,” says Calabi. “The history of this art is the history of the world, which has always been the people versus the power elite.”

Many of the historical pieces are from Calabi’s gallery collection, such as an 1875 political cartoon from artist Thomas Nast titled “The American River Ganges.” The print shows religious figures, in garb resembling crocodiles, rising from the waters of a swampy Capitol Hill to devour children while “U.S. Public Schools” sits precariously on a crumbling cliff. Fast forward 140 years, and you could easily replace those figures with appalling secretary of education Betsy DeVos and the cartoon would carry the same significance.

Several pieces in the show are social commentaries from artists representing the bleak political periods they lived in, including the current one.

“I think this is certainly the biggest crisis in my lifetime,” Calabi says. “We’ve had dark times with the Cuban Missile Crisis and Vietnam and Bush’s wars, and that’s part of the idea of the continuum. We’ve all seen this before, but Trump brings it to a new level.”

“We Shall Overcome” also carries the message that those who don’t learn from history are indeed doomed to repeat it. One of the show’s darkest pieces is a 1948 expressionist painting by Jean Halpert-Ryden titled Strange Fruit, based on the poem by Abel Meeropol and the Billie Holiday song, that depicts a lynching.

“It seemed like a historical remnant until Trump got in, and now it’s a very visceral reminder that the battle has not been won,” Calabi says.

“The advances we’ve had are not that racists were convinced not to be racist, but that society at large was frowning on speaking racism in public,” he continues. “But now they feel emboldened, knowing that Trump is one of them, and they’re coming out of the woodwork. We’ve already lost a lot of ground.”

In the face of these backslides, Calabi suspects that many hardcore conservatives, those who actually hold conservative values, are just as horrified by Trump’s rampant cabinet cronyism and international antagonization as liberals are.

“We need to show a mass movement. If these politicians realize they’ll never be elected again if they continue to stand behind Trump, hopefully they’ll move to impeach,” he says.

In addition to the historical works, “We Shall Overcome” represents a new crop of work from Bay Area artists including Sonoma County sculptor and painter Catherine Daley, Sebastopol artist Molly Eckler (who is also showing at Backstreet Gallery) and San Francisco printmaker Art Hazelwood.

While we’re still in the early days of the Trump administration Calabi predicts more artists will join the movement.

“These times drive this kind of art,” he says. “When things are really bad, the art of the time shows empathy and solidarity for those who are suffering, and of course artists are typically among them because they’ve traditionally been in the under- trodden class.”

Next ArticleSonoma sheriff meets with Sessions in DC, questions ensue