The Doyle Collection finds a permanent home at SRJC 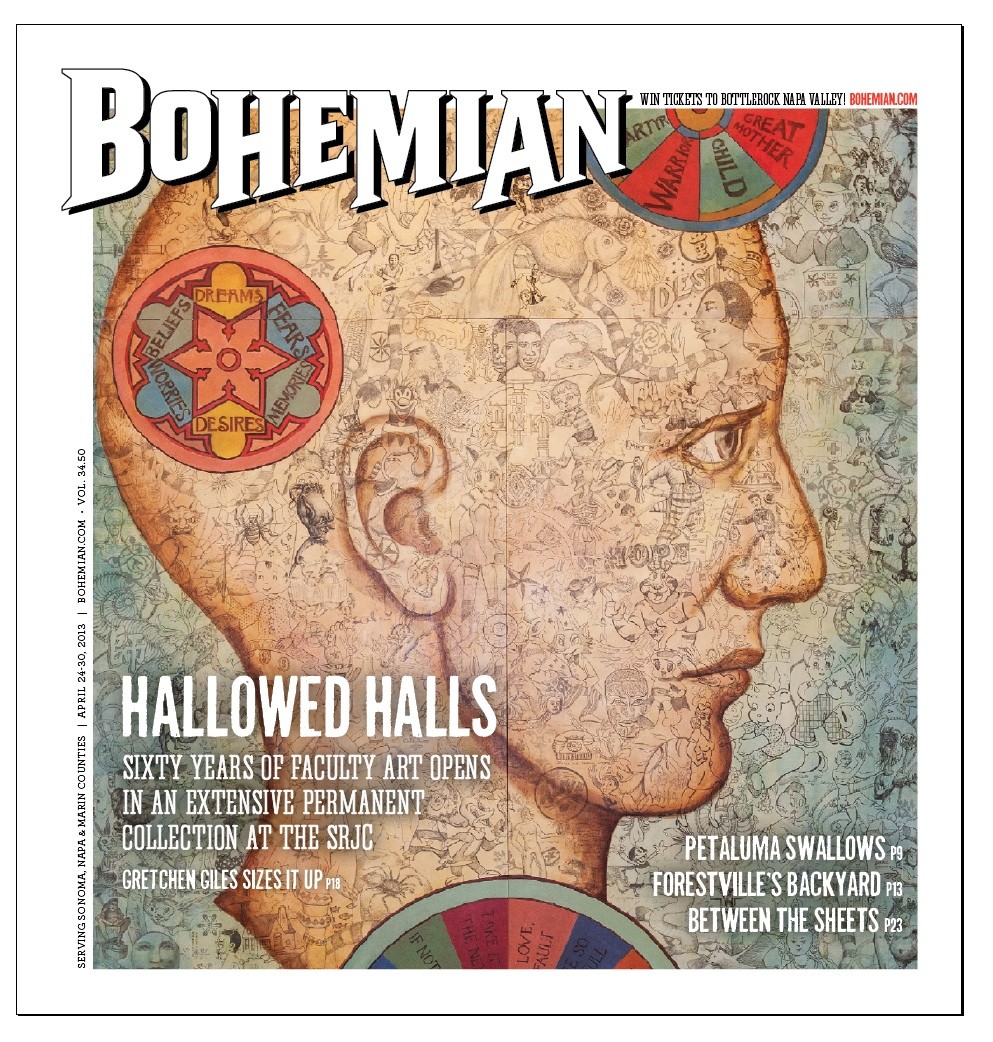 Oh, to return to college! To again experience that heady time of exploration and inundation when the aged young freewheel to philosophy class, actually enjoy math class and rip eagerly through a novel a week in English class. That fresh moment of one’s life that is spent not in nightclubs or dorm rooms, but rather, and ceaselessly, in the library.

Which is not so very bad at all if you are fortunate enough to be a student at Santa Rosa Junior College, where the seven-year-old Doyle Library just keeps getting better.

Completed in 2006 as the largest building on campus, the Doyle is a marvel of environmental sensibility, even making 350 tons of ice on its roof each night to cool the building’s air by day. The motif of the carpet is based on the images of local plants, color choices reflect local geography, a white-noise machine creates a uniform ambiance and natural light soars in through large panes.

As splendid as the Doyle already is, library technician Scott Lipanovich has found a way to make it even better—by adding a permanent art collection.

Which isn’t to say that it’s been easy. In fact, rounding up some 80 pieces from 52 artists took Lipanovich two and a half years. Some call it a labor of love; Lipanovich calls it “The Doyle Collection.” An opening reception is slated for Friday, April 26.

“We have this great building, great natural light and abundance of flat spaces on the walls. It seems only natural to create a great art collection,” Lipanovich explains. “And because, since the 1950s, we’ve had a great staff, we had the chance to do it only with people who’ve been on staff, which is unique.”

The work took so long to amass because Lipanovich adhered to a strict set of rules. He built the collection during his own volunteer time. All the art had to have been made by SRJC faculty and staff who were at the college from 1950 or later. As there was no budget for the project, the work had to be donated. If the artist was alive, he or she would bear the cost of framing; if the artist was not, Lipanovich invariably ended up paying for it himself. A final piece went to the framer’s just last weekend, costing him over $400.

An unassuming man concerned that not too much attention be made of him, Lipanovich shrugs mildly. “It’s a wonderful drawing and it’s in a permanent collection,” he reasons of the expenditure, “so I’m happy to do it.”

He has also been happy to spend Friday through Sunday for nearly three years visiting artists, spending full days viewing their life’s work, and coaxing donations. “We only had about seven donation-donations,” Lipanovich estimates. “Usually,” he smiles, “it was a pursuit.”

Such pursuits normally included food and conversation, and perhaps a new friendship. Not a bad way to spend one’s long weekends, actually.

“The best part of doing this was the donors,” Lipanovich says, referring to the artists he met. “Spending time with the donors and just having lunch. Hanging out. The donors are great.”

The list of artists collected is a who’s-who of North Bay creators, and includes such international names as Robert Arneson, who taught for just one year at the JC, 1958–1959, and left when he wasn’t hired on. A busy pastel self-portrait—which also graces the cover of Jonathan Fineberg’s new Arneson biography, A Troublesome Subject, released last month—hangs near the top of the main stairwell. At the bottom of the stairs is a piece by Maurice Lapp, who has work in the Whitney Museum, the Art Institute of Chicago and SFMOMA, among others.

Lapp, 88, joined the faculty in 1956, upon returning from a 19-month painting fellowship in Mexico City. Just before leaving Mexico, he entered a work, The Travelers, in competition. Famed painter Rufino Tamayo judged the show and deemed Lapp’s piece the best. Lipanovich, a friend of Lapp’s who has helped the artist catalogue and organize his work for a number of other exhibitions, had never heard this story nor seen the work. Lapp surprised him with The Travelers as a gift. Both of Lapp’s children are flying in for Friday’s reception.

“[W]ith every single artist I contacted, we eventually came up with something really good of theirs we could use,” Lipanovich says. “We would literally go through everything they did, not even just for the Doyle Collection, but just to see it all. There is a really good spirit to this.”

There’s a really good look to it, too. Walking the 1.5 acres of art that Lipanovich has hung is just as satisfying as a museum visit, with just as many unexpected heart-stopping moments. But make no mistake, the focus is on learning.

“This is their home,” he says of the students slouched and splayed and spread and slumped all around him.

“We’re a library first,” Lipanovich stresses. “The idea was to enliven and enrich the building, not make it an art gallery. Again, it’s part of their house. It’s not like [students are] going into an art gallery; they’re going into the college library.”

Which is not to say that they don’t notice changes. In fact, when library staffer Alicia Virtue took down a piece to photograph for the collection’s website, a slight uproar ensued.

“Within 15 minutes, students were at the reference desk,” Lipanovich remembers, “saying, ‘Someone took one of our paintings!'”

Lipanovich explains that while the students may rotate out every two years, the art won’t. “One of the things my friends hate is when they give a piece to a museum and it goes to the back and never gets seen.

For a more extensive view of the art presented in The Doyle Collection, see the Doyle Library’s own online gallery.

Next ArticleApril 27: Foghat at the Uptown Theatre