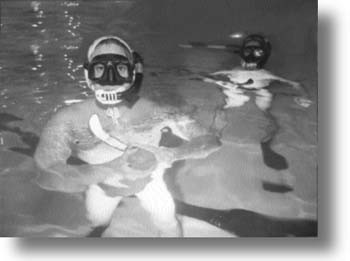 Getting Along Swimmingly: A member of the Santa Rosa Sharksunderwater hockey team moves in for a goal.

Aqua hockey is a watery workout for all ages

TWELVE FEET beneath the water’s surface, six members of the 10-man Santa RosaSharks team, blunt weapons in hand, swim in a hurried swirl of antagonism.With its flurry of fins and goggles, the seascape of scissoring legsresembles the obligatory underwater knife-fight scene in a James Bond movie.

Welcome to the bizarre world of underwater hockey, a sport so odd you’d thinkit’s a bad joke–until you try it.

Reality kicks in when you merely swim to the bottom of Santa Rosa’s Ridgewayswimming pool. The acute pressure on human eardrums at 12 feet is thefirst opponent, but you get used to it. The objective–to push a two-poundlead puck with a short wooden stick into a long, flat metal goal–requiresall of the physical strength and mental daring a beginner can muster. It’sdaunting but rewarding.

Indeed, underwater hockey is the best reason to swim to the bottom of deepwater since childhood mud fights in a murky country pond meant frequent crashdives for more ammunition.

Thankfully, adrenaline eases the pressure on your ears. For a few fleetingmoments during 90 minutes of aqua hockey, I sweep up the puck and kick downthe sideline without opposition. Where is everybody?, my oxygen-deficientbrain wonders. They must be getting air. I thrust for the goal. Visions ofbeginner’s luck splash across my face mask. Just six more feet. It won’t belong now. Down from the sky plunge the defenders. I pull a cheap move to theright. No such luck. I lose control of the puck and my lungs redline.

There’s nowhere to go but up.

“I like the rush I get at 12 feet,” says local enthusiast Brian Tucker, 28, aphysical education teacher who can scrimmage at the pool bottom for a fullminute or more before coming up for air. Tucker has traveled around thenation to play aqua hockey and even hosts a Web page devoted to this esotericsport.

“Most do it to stay in shape,” says Cotati butcher Scott Becklund of thegrowing interest in underwater hockey. There are only a few hundredenthusiasts nationwide.

The Sharks–or Rasta Sharks, as they are sometimes known–are part of thePacific Coast Champions aqua-hockey league, which includes teams fromSeattle, Vancouver, Fresno, and San Francisco. The teams compete for a chanceto play in the annual nationals. The United States also fields a nationalteam in the world aqua-hockey championships.

Although the game calls for terrific stamina, skill, and guts–and visuallystimulating uniforms that include bathing caps, ear protectors, masks,snorkels, duck fins, gloves, and rough-hewn push sticks–underwater hockey’spopularity is limited by one main factor: until someone builds a glass-walledswimming pool, this will never be a spectator sport.

Too bad, too. Underwater hockey is remarkably inclusive of gender, age, andphysique. At a recent game, 68-year-old Charlie Anderson skillfully dueledhis own 15-year-old son at the goal under three meters of water. And a chunkyguy at least 50 pounds overweight lithely kicked for repeated breakawayscores. Women also play, and mixed teams are common.

While most of the local enthusiasts are men, women and co-ed teams alsocompete and the league sponsors summer children’s clinics.

Water is the great equalizer that counteracts weight and size in therighteous fight for control of the watery depths.