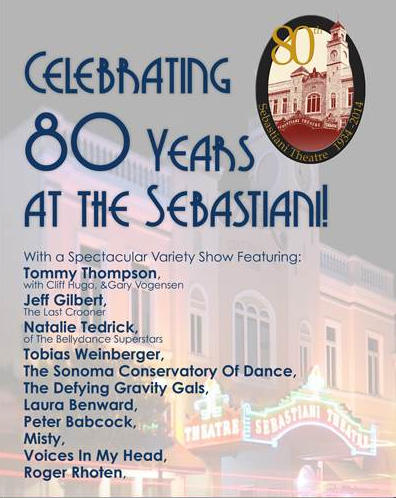 The historic Sebastiani Theatre screened its first movie on April 7, 1934. Fugitive Lovers, starring Robert Montgomery and the Three Stooges, brought out a crowd of a thousand people who lined the streets around the Sonoma Plaza and welcomed the impressive structure. Admission was 30 cents. Times have changed, but the theater remains a cultural and community landmark, and this year its 80th anniversary kicks off with a deservedly festive variety show and celebration. The party highlights performances from local musicians, dancing, magic and more. The first of a yearlong series of events, the 80th Anniversary Celebration happens on April 19 at Sebastiani Theatre, 476 First St. E., Sonoma. 7:30pm. $25. 707.996.9756.