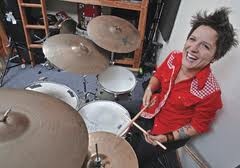 Over the years there’s sadly been a deficit of successful female drummers. Meg White from the White Stripes, Janet Weiss from Sleater-Kinney and Gina Schock from the Go-Go’s come to mind, but Allison Miller deserves to be on the list as well. The New York artist started playing at the age of 10, and her experience shows in her group Boom Tic Boom’s new album No Morphine, No Lilies. Together with Myra Melford, Todd Sickafoose and Jenny Scheinman, Miller takes listeners through a crazy and exciting journey in modern jazz. Hear songs like “Pork Belly” and “Nuh-Uh, No Sir” when Boom Tic Boom plays (with clarinetist Ben Goldberg replacing Scheinman) on Thursday, April 18, at 142 Throckmorton Theatre. 142 Throckmorton Ave., Mill Valley. $18—$28. 8pm. 415.383.9600.