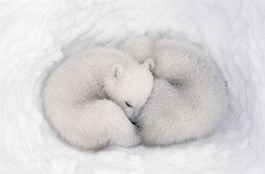 A reminder that Disney’s Earth is an event, not a movie, comes right away; it’s during the coming attractions for the sequel Disney’s Ocean, slated for Earth Day 2010. Here are small-screen excerpts from Disney’s nature shorts of the 1940s&–’60s; here are reminders of the eight Oscars Disney’s won in a format in which “nature writes the screenplay” (though this comment is as open to argument as the statement “Disneyland is the Magic Kingdom”).

The Discovery Channel and BBC collaborated on Disney’s Earth, but it is very much Disney’s movie. It begins with James Earl Jones rumbling on the soundtrack as the sunrise is viewed from outer space. Holding the series of critter encounters together is the plight of a polar bear family—”Dad,” “Mom” and two cubs during the course of a year. We keep returning to these bruins, in a documentary in which man never appears.

The more stunning small effects are what’s worthwhile. Disney’s Earth has fine trees. Remarkable new time-lapse photography pans gently across a valley, while observing the yearly change of a forest of deciduous trees from bare branches to scarlet leaves.

Peaceful moments don’t sell, and what’s a movie without conflict, anyway? From the “Nature Is Scary” files, we find shark vs. seal, polar bear vs. walrus, lions vs. elephant and cheetah vs. gazelle. The last of these battles, while bloodless, is almost pornography. The herbivore succumbs as much as she is killed, in ultra slow motion. One feels bad about the outcome, but not that bad. As Orwell wrote, “You can’t look at a gazelle’s hindquarters without thinking of mint sauce.”

Disney’s primacy in nature documentaries is a subject Neil Gabler examines in his recent biography of Walt Disney. In the 1940s, Disney had an encounter with Stanford president David Starr Jordan, an expert on the fur-seal territory debate between Japan and Russia. Thus, Disney decided to make a documentary on the seal islands of the North Pacific. Disney’s inspiration was to cut out most of the human factor: “More seals,” he kept cabling to the photographers in the Arctic. RKO Studios, Disney’s regular distributor, didn’t see the percentage in it. Neither did Roy Disney, Walt’s partner and brother: “Who wants to look at seals playing house on a bare rock?”

Hindsight shows how many people did. Gabler writes, “Seal Island would become the model not only for Disney documentaries but for nature documentaries generally: a strong plot, anthropomorphized animals with emotions imputed into them, and a musical track . . . which made the documentaries into real-life cartoons.” And so forth, on to the non-Disney hit March of the Penguins.

Disney’s Earth sticks with the successful formula. When we see a pride of lions lapping water together, their heads squeezed closer by a telescopic lens, they look as conspiratorial as the Clanton Gang. Time magazine film critic Richard Schickel writes, “There is no moral hierarchy among the species, and the business of cuing response through music, narration and film editing . . . leads to this sort of ranking by the spectator that is reprehensible.”

That’s the downside of Disney’s Earth all over; the technology has improved brilliantly, but the formula is same-old, same-old. Here is more rumbling narrator and more overwrought music. (We hear Celtic keening when a prey animal gets it in the neck.) We sometimes learn a little something about the land; we hear we’re in the Himalayas, the Serengeti or the New Guinea habitat of the aptly named birds of paradise. Maybe the most stunning part of this film is the mating dance of the superb bird of paradise, flashing its neon-bright, iridescent turquoise feathers, but the scene is marred by gag writing. “Git down!” Jones jokes as a different bird of paradise dances.

To the organization’s credit, Disney bites the bullet: “The planet is warming,” Jones says, leaving no room for backpedaling in this noncontroversial noncontroversy. But the ending is happy—they always are in the critter shows.

Always, delicate creatures make narrow, unlikely escapes, signifying the fate of a whole endangered species: “The marmoset is safe . . . for tonight. But how long can the whiskered monkeys of Venezuela hold their dominion against the invasion of man?” On the one hand, it reminds the gentle viewer of how many of the earth’s creatures are hanging on by a thread; on the other hand, it assures these viewers that some providence will look out for them. And so to bed.

‘Disney’s Earth’ screens all over the North Bay on April 22 and beyond.