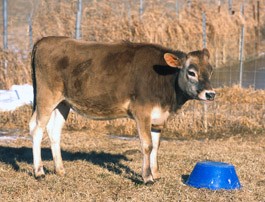 When the FDA classified genetically modified animals as 'drugs,' we all embarked on a long strange trip

On Sept. 18, the U.S. Food and Drug Administration released guidance on a regulatory framework for approving the entrance of genetically modified (GM) animals into the nation’s food supply. The term “guidance” is agency speak for “the law will look something like this.” Put another way, the FDA has offered advice, considerably weaker than legally enforceable regulation. With the announcement, a 60-day period for public comment was opened.

The only GM animal currently licensed for sale in the United States is the glow-in-the-dark zebra fish, a pet. No humans are expected to consume the fish, with the exception of a few drunken frat boys, and the creature’s need for warm water precludes any possibility of it escaping into the wild. But the glowing zebra fish will soon have some GM company in stores near you.

The new guidance is primarily directed at animals genetically modified for food-production purposes, but it’s based on the approval process used for animals that are genetically modified for pharmacological purposes, such as pigs designed to grow human livers or goats that produce insulin in their milk. Under the guidance, all GM animals, be they of the farm or pharma variety, will be classified as drugs.

Technically, the drug is the bit of foreign DNA that’s spliced into the animal’s cells, and the FDA will grant or deny approval to just those bits of DNA, not to the whole organism. This creates a dangerous regulatory gray area, says Jaydee Hanson, a policy analyst at the Center for Food Safety, who calls this arrangement a “fiction.”

“The gene is in every cell of the animal, and regulating the animal is the only tool they have to control these genes, but they say they’re only regulating the gene, not the animal,” he says. “Drugs don’t get loose and breed with each other. Animals do.”

As a case in point, he mentions the AquAdvantage line of GM salmon created by Aqua Bounty Technologies of Waltham, Mass., in 2001. The regulated “drug” in this case is a gene that makes salmon secrete extra growth hormone, causing the fish to reach maturity in 18 months instead of 30.

Should any of these fish escape into the wild, they would take their recombinant genes with them, posing unknown—and therefore, Hanson says, unacceptable—risk to wild salmon stocks and the ecosystems they inhabit.

It’s rumored that AquAdvantage salmon will be the first GM food animal approved for sale by the FDA. Meanwhile, a growing number of GM animals are being developed for the food market, says Hanson, and given this fact he thinks an approval process is long overdue. But while steps toward the creation of a regulatory framework for GM food animals are steps in the right direction, he says the FDA’s guidance as currently written leaves much to be desired.

“They’re not offering good peer review, because the drug-approval process is held in secret,” he says. This is ostensibly to protect trade secrets, but it’s still a bad idea, says Hanson, who suggests that lack of transparency could compromise the integrity of the approval process.

“The genetically modified food industry is a small world,” he says. “You’re going to have someone who used to work for a company who now works for FDA, or serves on its review panel, in the position to approve something from their former company.”

Many other food activists, policy analysts and interested parties are also taking issue with the FDA’s stance, contained in the guidance, against the labeling of foods containing GM animal products. Only foods that can be shown to have dietary properties different from their non-GM counterparts require labeling.

“They’re talking about pigs that are going to have mouse genes in them, and this is not going to be labeled?” says Jean Halloran, director of food policy for Consumers Union, which publishes Consumer Reports magazine. “We are close to speechless on this.”

Another concern is how the proprietary rights associated with modified genes will be enforced. Because genetic modifications are easily traceable, small livestock producers who introduce GM animals into their herds—or who acquire animals with modified genes unintentionally—might someday receive an unexpected bill for the use of those genes if they are traced to future generations of animals.

Producers of GM seeds have already sued farmers on such grounds, including cases in which the defendant’s crops were contaminated by someone else’s GM pollen from neighboring fields. Hanson says most cattle growers aren’t paying enough attention to the prospect.

“The breeding industry is mostly concerned with tracking animals descended from clones,” he says. Clones are genetic copies of other animals, but don’t necessarily have foreign DNA inserted. But most GM mammals, Hanson points out, are clones. “Once you get it right,” he says, “you clone it.”

On Sept. 19, the day after the FDA’s “Draft Guidance on the Regulation of Genetically Modified Animals” was released, the USDA announced a call for public comment on the need to regulate the movement of GM animals to ensure they don’t mix with wild animals or other livestock.

For producers and consumers alike, the onslaught of new biotech developments and the rapidly expanding world of associated potential consequences presents a near-overwhelming amount of information to digest.

But if ever there was an important time to comment on food and food safety, Hanson says, “this is it.”