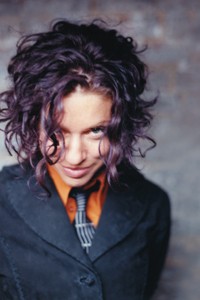 All Grown Up: Ani DiFranco knuckles down to a new maturity.

Ani DiFranco is more than just a pretty girl

Ani DiFranco’s music is a little like her famously changing hair–always the same yet always seeming new, with results that are often surprising, even beautiful. But other times, the results can make people cringe and ask themselves, “What was she thinking?”

Luckily, DiFranco’s newest album Knuckle Down (Righteous Babe) is not of the cringing variety. On it, DiFranco, who will be performing at the Luther Burbank Center on Feb. 17, has shed the morose qualities of her last few albums, abandoned the atonal jazz overtones and written an album full of warm, melodic folk songs.

The shift reflects a change in DiFranco’s recording process, as well as her perspective. DiFranco invited fellow musician Joe Henry to co-produce the album with her after they discovered they have a similar recording aesthetic when he toured with her in 2003. A group of musicians playing a variety of instruments–including the melodica and the glockenspiel–also contribute to Knuckle Down. Among them are former band mate Julie Wolf, San Francisco-based singer Noe Venable, and upright-bass player Todd Sickafoose, who will accompany DiFranco at the LBC.

But the best thing to come out of the DiFranco-Henry union may be engineer Husky Hoskulds, who achieved Knuckle Down‘s lush sound. Vocally, DiFranco has never sounded better, her voice moving away from thin, squeaky tones toward a deeper, throaty blues sound, especially on songs like “Seeing Eye Dog” and “Minerva.” Her propensity for dissonant layering has been scaled back as well, so while dissonance may still make contextual points in certain songs, the overall outcome is a more accessible, enjoyable listen. Knuckle Down is the most tonally balanced Ani DiFranco album to come along in awhile.

That balance is refreshing after DiFranco’s 2004 release, Educated Guess. For that album, DiFranco hid herself away in her New Orleans home to write, record, produce and even design the cover art. While you have to admire her independence, the resulting album was a difficult, stripped-down affair. When a song was not spoken word, it was burdened with high-pitched multilayered harmonies that a music critic for the Cleveland Plain Dealer summed up when he asked, “Who invited the Andrews Sisters, and why are they stoned?”

While DiFranco was writing Knuckle Down, she was also campaigning for Dennis Kucinich and touring the swing states for her Vote Dammit! tour. Kucinich even made an appearance on Trust, DiFranco’s recent documentary of a 2004 Washington, D.C., concert. Yet Knuckle Down is apolitical. The closest it comes to politics is “Paradigm,” where DiFranco sings about getting her activist roots from her immigrant parents.

The lack of politics is just as well because DiFranco is at her best when she focuses on direct experiences. The title track, “Knuckle Down,” for example, is about a time she looked through a telescope at a dust storm on Mars, and didn’t see anything but a blur, a moment of disappointment seeming a metaphor for her entire life. “Recoil” is a bumbling song about loneliness and the urge to give up, tied with the description of DiFranco’s dad, who at the time was in a nursing home (he has since passed away). DiFranco seems to relate to her father, singing, “Yes, I have my father’s heart / It may or may not keep on trying / Can’t really tell you what it is keeps me this side of that dark line.”

Lyrically, Knuckle Down has its weak spots, treading too close to clichés like “Oh, say can you see me?” in “Minerva” or “We took each other higher, then we set each other free” in “Modulation.” But these trespasses are easily forgiven considering the sumptuous quality of the album.

Still, Knuckle Down is no Dilate or Not a Pretty Girl, considered DiFranco’s best period, when she jammed angrily on her guitar and told record companies, “I could be the million that you’ll never make.” As a reporter for Spin put it, she may never write another anthem like “Not a Pretty Girl.”

But wouldn’t a girl anthem be a little silly coming from a 34-year-old woman? While DiFranco’s frantic energy has settled some over the years, she’s replacing it with something else: sophisticated, well-crafted songs. Which, she is always quick to point out, have always been the point, anyway.