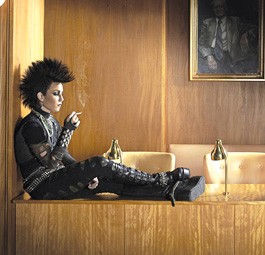 'The Girl Who Kicked the Hornet's Nest' stays bedridden

The glowing harbor views and country scapes of The Girl Who Played with Fire have been replaced in its sequel, The Girl Who Kicked the Hornet’s Nest, with a televisionistic series of close-ups of baleful Swedes frowning at each other over tables or sitting and fidgeting at press conferences.

The girl of the title, of course, is Death Björk 2000, better known as punkette guerrilla Lisbeth Salander (Noomi Rapace). While slowly, slowly healing from the multiple gunshot wounds she acquired at the end of the last movie, Salander becomes the object of lively interest from the police, who plan to charge her for the attempted murder of her father.

Meanwhile, the ill-tempered survivors of the government cabal that secretly imported Salander’s evil Soviet father into Sweden plan to silence the troublesome girl. Our hero, Mikael (Michael Nyqvist), working for Millennium magazine, wants to elicit Lisbeth’s side of the story. But his co-editor, Erika (Lena Endre), is menaced by anonymous emails and a brick through the window. This makes Erika less inclined to take on an editorial crusade instead of stiffening her willpower, which is disappointing for two reasons. First, in the previous movies, she didn’t look at all underequipped with willpower; second, there were only two emails.

Any movie with a villain shouting, “Fools! Idiots! I will destroy you!” has already made some kind of break with realism. So one wonders why the film pedantically insists on the realistic aftereffects of some gunshot wounds. Bad as these wounds would be in real life, they are perhaps a little overdone for the purposes of a thriller.

Furthermore, too much of the movie is spent showing Lisbeth in physical therapy, slowly starting to regain her zest for living under the supervision of a handsome, kindly physician. It’s not until the end of the movie that she’s back to her old self, a walking tacklebox of piercings, dressed like Cher during her brief Mohican era and wearing the ornery, put-upon expression that has brought worldwide fame.

Just as deserving of a put-upon expression is Niklas Falk as the prime minister’s man in charge of the investigation. He looks so full of serious conviction—a falcon version of that eagle Max von Sydow—that one wants to see him take the movie over and shove the conspirators back in the old folks’ home where they belong.

Despite how wide-awake Falk looks, the investigations in the movie aren’t masterpieces of deduction. There are obvious traps sprung. Villains attack at precisely the kind of place to get them arrested in public. Clearly, this is to make it look like something’s happening between scenes of Scandinavians shuffling papers.

The enervation of The Girl Who Kicked the Hornet’s Nest is indescribable. It ends the trilogy not with a bang but with a thud. Its arc makes a long two-and-a-half hour journey from hospital bed to very unmoving last goodbye, when the two leads, punkette avenger and dog-faced journalist, practically turn to the camera and say, “We’re done here.”