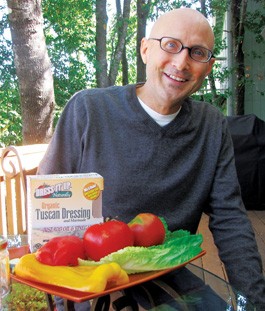 Anatomy of an Idea

Ted King sat sipping a cold Corona on the beach in Todos Santos, Mexico, waiting for the area’s storied green flash at sunset. He was on vacation with his wife, Suzanne, a high school Spanish teacher, taking time between jobs to ponder what his next move in the game of life might be. It was February of this year, and King, a freelance consultant for the organic food industry, had watched his client base dwindle with the economic downturn. He felt he had two choices: dust off his résumé and struggle back into a suit to job-hunt or strike out on a venture of his own.

“I was at that point in life where it was ‘now or never,'” King remembered recently, seated on the deck of his Forestville home. “The timing in our lives seemed right. If I failed on my own, it would be back to the suit and tie.”

King had quietly pondered a change for a while; his 25 years of experience in specialty organic food companies would be a good start. He also wanted a business he could run from his home—or from anywhere, for that matter—with wifi and a cell phone. Sitting on the beach, he experienced a flash of another sort: the right idea for a business. “I wanted to do something I felt good about, something different, find a new product,” he says.

Having attended dozens of food shows and having been exposed to hundreds of products, King knows what is out there and what not to try. “There always seems to be a star product of the year, whether it’s chocolate or coffee or a new flavored hot sauce with a catchy name. It’s a process of elimination,” he explains. “I thought of salad dressings as a stale category. It’s not updated for today’s consumers. I realized I could make something unique.”

King envisioned a product that would be a balance between homemade salad dressing, which can be time-consuming for busy cooks, and store-bought, bottled dressing, quick but not as satisfying. He also wanted it to be adaptable, able to complement whatever meal was being served. Open any fridge, and most hold a doorful of half-used condiment bottles. Hoping to avoid that unsavory scenario, King came up with the idea of a salad dressing kit that would hold two organic spice packets, a glass mixing jar for adding oil and vinegar, and a recipe sheet of dressing alternatives and marinades developed by his wife. The “Dress It Up” Naturally Organic Tuscan Dressing and Marinade Kit was born. At least in theory.

Next came the hard part, making his dream a reality. Once back at home, King started doing research at local food stores to see what was on the shelves and how it was priced. Other than Good Seasons, the Kraft salad dressing kit that has been around since 1958, King found little to compete with the product he had in mind, and certainly none both organic and kosher. He next considered whether the product could be profitable, so he could reinvest the income for the company’s growth.

“I penciled in costs and found it was a potentially viable product,” King says. “It is slightly more expensive than conventional dressings, but I’m using all-organic ingredients: pure cane sugar, not processed sugar or fructose syrup, and herbs and spices from organic, sustainable farming co-ops throughout the world.”

Any organic product must be certified by Quality Assurance International, an organic authority which monitors production from beginning to end to make sure the item meets its guidelines. King wanted the dressing to be kosher, and therefore needed the approval of the Rabbinical Council of America, part of the Orthodox Union. He feels that by making the item kosher, he can reach a wider market, and that public perception of kosher items is that they are purer and healthier. Both certifications add to the cost.

“I did very creative financing,” King chuckles. Since his past ventures had been successful, he was able to put seed money toward the project. “It is part of the learning experience. I am aware that the budget and timelines expand on any project. I have my eyes open to the sacrifices it takes to get the ball rolling, like selling my midlife-crisis sports car, but I feel that passionate about it.”

King has found budgeting a low point of the process. “I’ve had to make wild guesses. It’s not yet an established business, and there is no track record for potential backers to see.” King has negotiated to make future promises to suppliers to get things going now. For example, he has bought twice the number of boxes needed for the first production run in order to get a lower price. He won’t be billed for the boxes for six months, so has time to sell the first products to pay for the second run. “I’ve got to have faith and optimism, otherwise I might be shingling my roof with the excess boxes,” he jokes.

Budget in place, King is in production and says he feels very fortunate to have a great resource pool. “My former co-workers and other individuals have given me a lot of outside help. They are key in making me feel good about what I am attempting.” Recognizing his business strengths and weaknesses, he has contracted much of the work out rather than attempting to develop each component of the project himself. After coming up with the basic spice blend, King turned the research and development over to an independent contractor for the final tasty product. This freed him up to attend to packaging. And to look south.

“Southern California is the most cost-effective place for packaging, but I’m still looking for local companies with the capabilities to portion out the seasonings into envelopes and seal them,” King says. “Special equipment is needed, plus the plant has to be certified kosher and organic. Food manufacturers in the Bay Area are a declining breed, but Southern California has a strong food-manufacturing and packing base.” King has also audited the company’s facilities to make sure they have both the appropriate safety standards and exacting quality-assurance standards, and can meet the demand for quantities needed. “I have to feel comfortable that they are using good standard manufacturing practices without me being there every second,” he says.

King tossed around different names for the dressing, finally settling on Dress It Up. “It gives the connotation of an upscale, well-made dressing. I had to research if the domain name was taken or if it’s been copyrighted, learning as I went. Google’s been my friend,” he laughs. A local graphic artist developed the “shelf attractive” packaging design while King wrote the copy. Past colleagues helped with the aesthetics of the packaging, giving it a clean look while including all the crucial information.

With the dressing in production and a mocked-up kit, King is ready for the most important step: sales. “I’m looking forward to it,” he enthuses. “I have very good mentors who are helping me with what and what not to say during my presentation.” King has acquired his first clients through six degrees of separation, falling back on his experience in the food business and using his established networks of professional relationships to help him make contacts.

“Getting an initial meeting was fairly easy, but then I had to sell them on why they need my product and the benefit of having it on their already crowded shelves. I let them taste the product and pitched my positives. You only get about 20 minutes. When I get my ‘yes’ I pack up and get out before they can change their minds.”

What advice does King offer to other aspiring entrepreneurs who might be dreaming on a Mexican beach? “Other people’s help is the key,” he stresses. “It took my wife’s leap of faith to allow me to do this—I can’t say enough about that. Don’t hesitate to contact the experts in the field; you can take or leave their advice, but at least you have their words. Throughout the process, take a step back and keep the big picture in mind. I almost made a different product due to costs, but I stayed on course. Don’t change paths because it’s the easier one to take, and definitely be flexible and open-minded.

“You must have passion and really feel in your heart that what you’re doing is right. The passion will sustain you when you hit bumps,” he laughs, “and there are always going to be bumps.”

For retail inquiries, contact Ted King at [email protected] Dress It Up Naturally Organic Tuscan Dressing and Marinade Kit will be available at Petaluma Market and Pacific Market in Sebastopol soon. One percent of the company’s net proceeds are committed to the Conservation Fund.