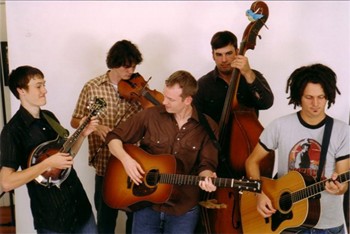 Given the number of rabid bluegrass, folk, alt-country and country fans living in the North Bay, it’s a wonder that the region no longer hosts a festival devoted to this particular roots sound (or Cajun or reggae for that matter). For the most part, fans are forced to take their pleasure where they find it on the far-flung club scene. (Don’t feel bad if you didn’t get a ticket to Willie Nelson’s upcoming sold-out show at the Luther Burbank Center; I didn’t score one either.) Recent weeks have seen the Yonder Mountain String Band, the Mammals, Crooked Still and Audrey Auld (who returns to the Acoustic Church in Point Reyes Station on May 13) taking to local stages. The rest of the month should be just as fertile.

Split Lip Rayfield–the three horsemen of the bluegrass apocalypse–bring their scorched-earth brand of hillbilly mayhem to the Sweetwater Saloon in Mill Valley on April 16. This Wichita, Kan.,-based foursome deliver lightning-fast guitar picking and banjo strumming, and–get this!–that ain’t no bass gittar, baby, it’s a one-string incendiary device made out of a Ford truck gas tank and a weed-whacker string.

Less ferocious but no less adept on their instruments are the members of the South Austin Jug Band, whose 2004 eponymous debut includes guitarist Willie Pipkin’s tasty bluegrass rendition of Jimi Hendrix’s “Little Wing.” Amid a herd of smart, young string bands (the Crooked Jades, the Reeltime Travelers, the Duhks, et al.), this Texas neo-bluegrass band have incredible potential, and even though they can be a bit rough onstage at times, their brand of Lone Star beatnik country never fails to produce some shining moments.

One of the best local alt-country bands, the Mother Truckers, deliver their irreverent country to the Rancho Nicasio on April 29. Mother Truckers guitarist Josh Zee (who has released two major label albums on the Sony Work imprint with the band Protein) and singer and multi-instrumentalist Teal Collins (who has contributed to sessions with Madonna, Whitney Houston, Shanice and Third Eye Blind) teamed up last weekend at the Rancho as an acoustic duo with a front-porch feel. Keyboardist Chip Roland (Zero), pedal steel player Dave Zerbal, and drummer Dana Miller (who has recorded with Sheryl Crow and Michael Jackson) round out this talent-laden lineup.

That West Marin venue, with its wagon wheels and large moose head mounted on the dining room wall, is the perfect spot to kick up your heels to such songs as “Daiquiris and Dice” and “Put the Gun Down.” Catch the Mother Truckers on Friday, April 29, at the Rancho Nicasio. On the square, Nicasio. 8:30pm. $10-$12. 415.662.2219.

Guitarist Jay Geils will be forever identified with the J. Geils Band, the Boston-based bar band that scored the ’80s hits “Freeze Frame” and “Centerfold,” but his jazz and blues influences were strong even as a teen (his dad owned an impressive collection of jazz 78s). Geils actually started his musical training as a jazz trumpet player–and he has some sweet chops! This sometimes laid-back, often swinging set of small-band jazz and blues standards (including compositions by Duke Ellington, Benny Goodman, Bill Doggett and Rahsaan Roland Kirk) is built around an organ combo with Roomful of Blues tenor saxman Greg Piccolo, Benny Goodman tenor sax sideman Scott Hamilton, classical and jazz clarinet player Billy Novick and a host of other guests. This is the perfect soundtrack for your next backyard barbecue party. Fire it up!