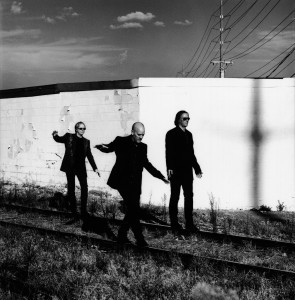 Album Review: R.E.M. “Collapse Into Now”; The Decemberists “The King Is Dead”

On their new album, R.

E.M. drops the ball, but the Decemberists pick it up and go country on The King Is Dead

Like R.E.M.‘s 2008 comeback album Accelerate, Collapse Into Now starts out strong with potent back-to-back rockers “Discoverer” and “All the Best”, both featuring superb rawk riffage from Rickenbacker hero Peter Buck. But after the kinetic, acoustic-based “Uberlin”, their most interesting mid-tempo pop ditty in ages, the momentum stops with the bland, embarrassingly earnest “Oh My Heart”, a sequel of sorts to 2008’s Katrina narrative “Houston”. The W-era couplet “If the storm doesn’t kill me, the government will” has become the misguided “The storm didn’t kill me, the government changed”, a surprisingly naive assertion about the current administration for these onetime political-rock icons.In fact, Michael Stipe’s lyrics are the only problem with this otherwise enjoyable rock hodgepodge of beloved R.E.M. styles, reminiscent of 1996’s underrated New Adventures In Hi-Fi. While the music of Buck and Mike Mills buoy the album (with vibrant splashes of mandolin, organ, brass and even accordion throughout), the lyrics  – always one of the group’s strong points – appear uninspired and mediocre. “It Happened Today” opens with: “This is not a parable, this is a terrible; this is a terrible…thing”. Worst is the confusing “Every Day Is Yours to Win”, which spoils a sweet Velvet Underground-esque guitar slink on lyrics too elementary to reprint. The slow-burning closer “Blue” could’ve been R.E.M.’s next “Country Feedback”, this time with pounding piano and gorgeous Patti Smith vocals. Yet it’s sullied by Stipe’s poetic recitation of a personal letter – just like their first Patti Smith collaboration “E-Bow the Letter” off New Adventures– the closest to blatant repetition the group has ever come.This dilemma naturally makes simple rockers (where lyrics are less noticeable) the record’s highlights, especially the joyous “Alligator Aviator Autopilot Antimatter”, where Stipe and guest vocalist Peaches try out their best Iggy Pop impressions. Stipe’s lyrics don’t need to be esoteric or oblique to work (Automatic for the People is pretty straightforward, lyrically speaking), just more imaginative than this. Once again, R.E.M.’s renewed spirit is welcome, but its singer needs to hold up his end of the bargain – and fast.Oddly, the most solid “R.E.M.” songs this year come from another band, Portland quintet The Decemberists, who have long been compared to R.E.M. for Colin Meloy’s voice, their penchant for obscure historical subject matter, and general nerd-rock demeanor. They channel their heroes on The King Is Dead, the latest “indie” release to top Billboard’s album chart. Meloy and co. have put the concept albums on hold for a beautiful country-rock record that delves further into every Americana flourish of R.E.M. circa ’83 to ’92, with tinges of Springsteen and Neil Young also popping up. Peter Buck himself guests on three tracks, including the single “Down By The Water”, which boasts a folky, organ-heavy sound.The album’s highlight is “The Calamity Song” which sounds like a Murmur outtake, replete with the propulsive acoustic riff (think “Talk About the Passion”) and taut, restrained drumming. Lyrically, Meloy delivers with vaguely rustic non-sequiturs. “On the road, it’s well advised that you follow your own bag,” he croons, “in the year of the chewable Ambien tab.” If you’re stuck on vintage R.E.M., buy The King Is Dead.