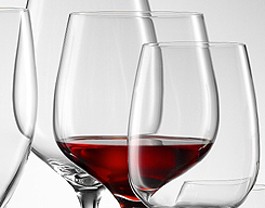 A ir and wine have that torrid sort of relationship that only leads to ruin. It’s said that air is the enemy of wine, but consider the yogic regimen of letting uncorked wine “breathe,” and air becomes its fast friend. Decanting is employed as a therapy for wines young and old, to open up the closed, smoothen the rough and edify the callow. Critics of the ritual say not to worry about the air, pointing to several high-profile blind tastings in which even professional tasters preferred wine poured straight from the bottle. If anything, a decanter looks pretty on the table, and will, for better or worse, expose wine to its old frenemy.

What about those legitimate occasions when we don’t wish to consume an entire bottle? For the gear-happy, there is an ever-expanding array of novel gadgets that promise to aerate the beejesus out of wine. Perhaps the simplest, yet most mysterious is the “breathable glass” developed by German manufacturer Eisch Glaskultur. It’s claimed to open up wine in a few minutes, equivalent to an hour in a decanter.

No different in appearance than standard crystal, it has no baroque rivulets, valves or channels, no batteries included. The company is evasive about its proprietary technology, explaining only, “After the actual manufacturing process, the glasses undergo an oxygenizing process which gives the Breathable Glass its unique properties. Generally . . . wines with rough edges are softened and flavors are enhanced.”

Naturally, this calls for an experiment. Five-ounce pours were tasted blind from the Eisch against a comparably sized normal glass. To approximate the scientific method, I recruited my estimable colleague Pepe to help randomize the samples and to provide commentary. We agreed that the Eisch flattened out the inexpensive 2005 Forestville Reserve Chardonnay and that the varietal aromas were sharper in the regular glass.

The medium-bodied M. Chapoutier 2006 Côtes-du-Rhône blew off initial aromas from mushroom and dirt to milk chocolate; if anything, the regular glass had brighter fruit and astringency. Pepe got “firecrackers and port” from a regular glass of Viña Cobos “Felino” 2007 Mendoza Malbec (the youngest, most tannic of the test), noting that the Eisch pour “smells better—but smells less.” I got plums and fruitcake, and found the Eisch pour was less volatile, with a somewhat drier, maybe even more integrated palate.

Conclusions: The breathable glass doesn’t improve every wine, but may tamp down initial aromas—both good and lesser—and seems to somewhat round out the rough edges. I noted later that the glass, if simply rinsed out, retains an odor of chemical or oxidized wine, perhaps a clue that there’s some kind of micro-porous coating at work.

There is another, clearly useful purpose to decanting: to keep the sediment at the bottom of an old bottle from murking up one’s glass. Alas, the breathable glass cannot help wine to pour sweet and clear from the brim to the dregs.