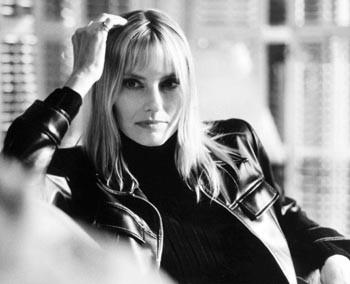 Fan mail: An end to the discussion

DEAR AIMEE Mann: In the end, I suppose you’ll find this an even more querulous fan letter than those sappy, gut-wrenching ones I’m sure an artist of your caliber is accustomed to receiving all the time.

It’s the kind of troublesome epistle that pleads a sort of symbiotic emotional and psychological, and, if one is honest about such things, romantic identification with what the letter’s author assumes is a privileged view into your psyche through the concrete evidence of your lyrics, your music, your albums.

I’ve written a few of those bummers myself, and I’m not proud.

Such fan mail takes on, ipso facto, an air of nauseating neediness masquerading as confessional doppelgänger of spiritual purport. You know, as though those absolutely compelled to write letters praising you for your brilliant, heartbreaking songwriting must automatically prove they are in fact capable of such autobiographical feats of genius themselves, emotionally or poetically speaking. Which in turn places upon you an undue and not to mention anonymous burden of responding to them as though they were indeed not only familiar but completely cozy with the private workings of your subtle mind.

So let me begin, then, by apologizing, because this letter is bound to encounter some of the same formal/personal/spiritual conundrums of the confessional style of missive I’ve heretofore mentioned.

You see, in my tenuous capacity as an amateur music critic, I’ve agreed to attempt a sort of personal deconstruction of the idea of heartbreak as it pertains directly to your work on the Magnolia soundtrack (I would even include in this reckoning your amazing cover of “One” by Three Dog Night). Actually, my editor put the assignment in these general terms: Write in a personal vein about a song or album released within the last year that breaks your heart.

Of course, when he told me of the idea, I endorsed it enthusiastically. I had no idea what I was getting into. And, believe me, attempting such an analysis has been a sorrowful nightmare of epic proportions.

IT GOES without saying that this (my troubles with writing) has nothing to do with your work, which, in my humble opinion, is totally without parallel in contemporary music. It’s not as though once I commenced writing about your songs in an exclusively autobiographical manner, they all of a sudden began to dissolve under actual critical scrutiny, or anything like that.

Actually, quite the opposite.

I discovered (with a deadline looming, no less) that once I tried to seriously describe exactly how your songs (especially “Driving Sideways” and “Save Me”) broke my rather breakable heart, I had absolutely nothing to say. All I really could do was simply and faithfully transcribe your lyrics, song by gorgeous song, and leave it at that.

I suppose the original point or idea or theory, if you will, of the whole exercise was to show the internal impossibility and technical arrogance of obtaining or trying to obtain objectivity in the already questionable realm of criticism, while also offering a kind of touching first-person portrait of the supposedly cold-hearted asshole critic as just one more average, fallible person who is completely capable of having his/her fragile heart broken by good or even great or possibly ingenious (as in your case) music.

Little did I suspect that this would have the alarming and dispiriting effect of unraveling quite violently my psychological underpinnings, and leaving me, as it were, paralyzed by the very suppositions that lurk beneath the act itself of writing about music.

Perhaps you will perceive more clearly what I’m trying to say if I simply quote to you a passage from my first frustrated attempt at an essay on the impact of your very fine and quite perfectly melancholy music (forgive, please, the implied hubris of me quoting myself):

“Aimee Mann knows, deep down, that knowing and doing are two very different things. In her songs, she is continually juxtaposing the voice of acute self-awareness with the very thing self-awareness cannot prevent, which is, of course, the circular tragedy of desiring. Like the great novelist Marcel Proust, Mann seems to believe that, in matters of the heart, we are all of us doomed to repeat the exact same mistake, to fuck up over and over and over again in our own peculiar way.

“Mann’s vision of fate, then, is essentially romantic; her songs portray an isolated intellect swamped by the claustrophobic dictates of an unyielding emotional need. There are also those rare moments when she suddenly frees herself from this claustrophobia just long enough to glimpse it from the outside. In these instances, Mann adopts the far-reaching perspective of the universal confidant offering warnings that are doomed to fall upon deaf ears, as in her song ‘Driving Sideways’:

At least you know You were taken by a pro I know just how you feel She talked the perfect game Deflecting all the blame You took the jack And changed the flat And got behind the wheel Now you’re Driving sideways Taken in by the scenery As you’re propelled along And your companion Will not help you to navigate For fear she may be wrong.

Perhaps, in reading this, you can decipher the tangential manner in which your sadly beautiful music and lyrics seem at once to uncover and give shape to all those subterranean, amorphous sorrows of my own past.

I choose the word decipher instead of understand because in the act of spelling out my feelings as they relate to your music, cause and effect become impossibly jumbled, and I find myself spiraling into an enervating vortex of fragmented emotions that are part mine and, artistically speaking, part yours.

What really strikes me about the passage above is how, under the charmed influence of your songs, I disguise or not so ingeniously couch practically the whole condensed psychological history of my own romantic failures, and also how those failures have completely and ineradicably informed my present vision of love, and therefore my ideas of heartbreak.

Such writing, if it has any merit at all, belongs only in the privacy of my own journals.

In closing, Ms. Mann, I wish only to assert that I believe it was the absolute brilliance and technical perfection of your highly emotional songwriting that hastened the inevitable (i.e., the utter collapse of my belief in the expressibility [sic] of even the simplest subjective/critical insight into truly heartbreaking music).

I suppose, in my own way, I am paying you the highest compliment. I can only hope you take it as such. And far from depressing me, this whole agonized and protracted situation has actually had an altogether liberating effect.

I understand only now that, in the realm of songs that “break your (i.e., my) heart,” there is a kind of psychosomatic erasure that secretly takes place between the listener and what he/she is listening to. Music, and especially sad music, is to be experienced and felt, not analyzed and talked about.

The best sad music, I believe, works the miracle of articulating all those heartbreaking but ultimately salvational and gorgeous truths that cannot–indeed, should not–be articulated by one so enveloped in this or that sad song.

The inscrutable laws of the heart forbid it to be otherwise.

Thank you for listening.