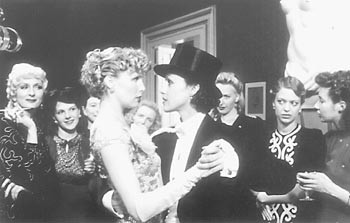 THERE AREN’T any films about the great lesbian romances of the Third Reich, and maybe it was too much to hope that a movie with such an unusual topic would be any good. The surprise is that Max Färberböck’s Aimée & Jaguar is grand, romantic, painfully sexy, and yet hardheaded.

It tells the true story of an almost extinct milieu–the last little bit of Berlinese decadence surviving in the middle of the bombardments and blackouts. Sexual taboos go astray in the face of imminent death. And the lovers who call themselves “Aimée” and “Jaguar” thrive in this semidarkness, for a time.

“Jaguar” is the Rilkean pen name of Felice (Maria Schrader), who is a lesbian, a Jew, and a spy in Berlin during the last years of the World War II. She works as a secretary and light-verse writer for a Nazi newspaper. By night, she and a small group of gay female friends scrounge drinks and enjoy such nightlife as is left. One evening, Felice spots a pretty Aryan woman–a housewife named Lilly Wust (Juliane Köhler).

Felice begins a slow seduction of the married woman, through anonymous love letters signed “Jaguar.” Lilly is susceptible; her husband, Gunther (sympathetically portrayed by Detlev Buck), is a soldier on the Eastern Front, and the two have a sort of unofficial open marriage. Eventually Gunther surprises the two women in bed and divorces his wife. Now Felice and Lilly, whom Felice renames “Aimée,” are free to be lovers, though the affair is clouded by guilt and jealousy. Modern-day bracketing sequences tell us how the affair ended.

On the whole, Färberböck doesn’t give the title characters the Hollywood treatment. The film presents Aimée/Lilly as a love object without being an enormously bright person. Compared to the free-spirited and cultured crowd Felice runs with, she’s a bit dim. Apparently what Felice the Jaguar sees in Lilly is forbidden fruit.

On the surface, Lilly is the ideal German mother; she’s even decorated with one of those medals the Nazis used to hand out to women who had a lot of children. Felice, by contrast, is more than just an adventurous lesbian–she’s reckless and unfaithful and a little cruel.

It seemed like gay love stories would never advance onscreen as long as they were about nothing but persecuted innocents. What was needed were movies that demonstrate what happens to the persecuted–how they act as people under threat usually behave: they lie, they hide, they change their identities. Sometimes they turn their contempt on people who have the privilege of being able to love in public.

By showing this harsh side of a lyrical, passionate love affair, Aimée & Jaguar is one of the most complex and advanced woman/woman romances in the movies yet.