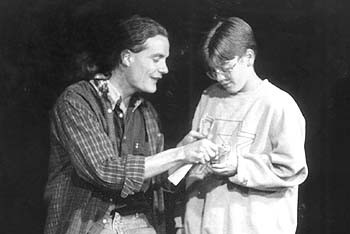 Sitting pretty: The first anniversary of the Poetry Slam in Santa Rosa finds organizer David Amador (left) with a steady and appreciative audience.

MAYBE IT’S a miracle. Or maybe it’s just the happy result of talent and passion showing up in the right place at the right time. In any case, the Poetry Slam at Actors’ Theatre has just marked one full year of making the air crackle with the electric power of the spoken word.

Ask slam founder David Amador if he ever expected to get this far, and he doesn’t mince words.

“Can I just laugh as an answer?” Amador says. “No, I had no idea. I’d attended other poetry readings and seen how badly they went, despite the best intentions, because of the venues they were held in. I had no idea that [this event] would last a year.”

In poetry circles across the country, the slam has become a well-known way to jazz up live performances by pitting poet against poet in friendly competition for small prizes. It doesn’t always work, of course, but it seems to have succeeded in Santa Rosa, where crowds averaging approximately 50 people file into the theater on the second Monday of every month to hear and be heard. That’s no mean feat in Sonoma County: There are other flourishing local poetry events, such as the open-mike at Copperfield’s Cafe in Petaluma, but the area has also been witness to some dramatic (but poetic) failures.

To celebrate the Santa Rosa slam’s first birthday, a Grand Slam will be held on May 10. The event will offer a grand prize of $100 to the best of the best and will feature as many past winners as Amador can round up.

“Poets are notoriously difficult to keep in one place for very long,” Amador explains. “Some of the phone numbers I have for people aren’t good anymore. But I do have commitments from eight previous winners.”

The 36-year-old Amador, who has a Ph.D. in religious studies and works a day job in the health-care industry, admits that he didn’t have a lot of relevant experience before the first slam last April. But the event’s combination of an open-mike period and the slam competition has built a loyal following of repeat attendees and attracted a regular stream of newcomers.

One of the most popular portions of the night comes at the quirky climax of the competition, when the final two contestants square off by making poetry with word magnets on a refrigerator door that was scrounged from Amador’s garage.

When asked to explain his event’s staying power, Amador gives ample credit to the theater space.

“Part of it is just being able to dedicate a place and time to the performance of the written and spoken word,” Amador says. “There’s no eating, no sound of coffee grinding, no diners moving around.”

Another key factor is the guest poets who are featured every month. Including such local notables as Julie Reed, these guests attract their friends and fans to the Santa Rosa slam.

“People come, they witness the total event, and then they’re ours,” Amador says. “They love it. That’s what keeps this thing going.”

The upcoming Grand Slam will highlight what is perhaps the event’s most remarkable feature–its diversity. The people who step up to the microphone have ranged in age from 10 to 70, and they come with work in a wide variety of styles, from limericks to guitar poetry to postmodern stream of consciousness to prose and dramatic monologues. Experience also varies: There are many old hands, but it’s not uncommon for newcomers to preface their work by explaining that this is the first time they’ve ever read in public.

“It’s all them,” Amador says. “I have nothing to do with it. It’s their stunning ability to create brand-new worlds with their words that makes us a success. Sonoma County is lucky to have them.”

One mark of the event’s success is that it has been featured in several national poetry magazines, such as Poetry Flash. Moreover, the Wine Country Film Festival recently approached Amador about undertaking a partnership to create a slam event at the festival.

But Amador seems to be most impressed by the growing sense of community among the event’s participants. That cohesion can lead to some interesting results. For instance, Amador doesn’t consciously set out to create themed nights. But he says that, somehow, they seem to happen anyway. One winter evening featured dark poetry about such deeply personal topics as rape and incest. At last month’s slam, which took place soon after the United States began bombing Serbia, the poets focused on war.

“These aren’t things that people think about consciously,” Amador says. “It just happens in a great act of synchronicity. That tells me that this is something that is growing beyond a mere event. It’s taking on a life of its own.”