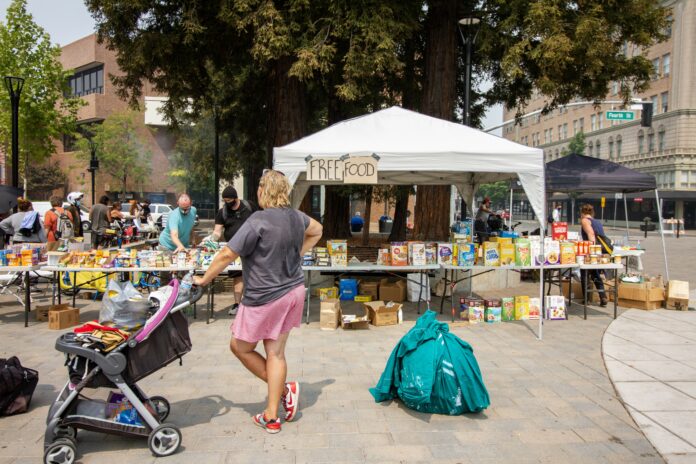 Despite a Red Flag Warning and smoky skies, activist collective Sonoma County Community Care gathered on Sunday, Aug. 23 at Santa Rosa’s Old Courthouse Square to distribute thousands of vital supplies to the city’s unhoused population. The supplies, which included everything from tents to toiletries, were collected the previous weekend, but the initial distribution day was postponed due to extreme weather conditions that caused wildfires throughout Northern California.

Sonoma County Community Care is a group of 10 people who define the project as “a political activism collective dedicated to community care.” On the distribution day, the collective was supported by another 10 or 15 volunteers who organized the offerings by type around the Square. The vast majority of donations were clothing; however the group also received bedding and a tent, sanitary products, school supplies and food.

Leading up to the event, the collective posted a list of more than 30 different donation requests on Instagram and on printed posters around town.

Sal Alvarez says that the request list was compiled by the community.

“We went down to the river and to encampments and asked people what they wanted,” they said.

The number of donations overwhelmed and amazed the group, who spent many hours throughout the week sorting and organizing the supplies for the distribution day.

Still, demand for some items exceeded supply. Tents, tarps and other shelter materials went the fastest.

Alvarez estimates that by late afternoon as many as 75 people had come by for supplies.

“We literally only had two bags of food left, compared to the mountain that was there in the morning,” Alvarez said.

The collective say they were told that some disabled fire evacuees were in need of clothing. At around 4:30pm, volunteers drove two cars of unclaimed clothes to the fire evacuation center at the Sonoma County Fairgrounds.

“We are working together with Transform Rohnert Park, Sonoma Acts of Kindness and some other organizations that do direct work with encampments, so we’re going to try to coordinate with them and other organizations to take whatever we have left straight to people that didn’t make it today,” Alvarez said.

“It’s always a bit nerve wracking organizing an event, especially so with the current fires and pandemic,” said Natalie Anderson. “This event reinforced the equal importance of a structured plan and a flexible ‘rolling with the punches’ attitude.”

Emma Hughes added, “One of my biggest takeaways was how taken aback people were that everything was free and that there were no strings attached, which demonstrates such a need for straight-up community building.”