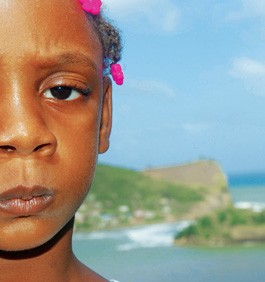 Eating Haitian food won’t directly aid earthquake survivors, and it isn’t a substitute for sending cash or other forms of assistance. But eating Haitian for an evening is a way of paying attention to a brighter side of Haitian life and can be a valuable reminder that there is more to Haiti than its enormous capacity for suffering.

Already, citizens of the world are catching up on their Haitian history and learning that long before the quake, Haiti was the poorest nation in the Western Hemisphere, and one of the most environmentally degraded, politically oppressed and violent, too. If the disaster helps focus attention on this sore spot, perhaps someday we’ll recognize a silver lining to this tragedy.

Whether you’re breaking bread together, taking a meal to a sick friend, or learning about another culture through its food, eating can be a bonding experience. So while our thoughts and support go out to the people in Haiti, how about a virtual trip there via an evening’s victuals, to remind us that Haitians deserve respect as well as help? While Haiti’s experience under French rule did much to set its tumultuous trajectory, a country could do worse, from a culinary perspective at least, than to be colonized by France.

Our first dish, in fact, bears a vague resemblance to the French dish duck a l’orange. It’s called griot, a word that also refers to West African minstrels. Griot the dish is pork marinated in sour orange juice and then browned—a sort of pork a l’orange, if you will. It’s one of the most treasured dishes of Haiti, and very rare in a country where pork is a luxury.

Sour orange, one of griot’s key ingredients, isn’t as easy to obtain as simple oranges gone bad. Sour—or Seville—orange is a distinct citrus in the orange family, and if you can get your hands on some, by all means do. Alternatively, Goya markets a sour orange marinade called Naranja Agria. Otherwise, limes can be used, or a mixture of lime and orange juice.

If using fruits, cut them into quarters and squeeze the juice into a bowl until you have roughly a cup and a half. Save the peels.

Cut two pounds of pork chop or pork shoulder into half-inch cubes and toss the cubes in salt until they’re coated. Stir the peels of the squeezed fruit in with the salted meat, so the zest from the rinds can permeate the meat. Let sit for half an hour.

Now rinse the meat cubes under cold water. Place them in a pot and cover them with the juice. Add a sliced jalapeño pepper, a teaspoon of thyme, a quarter cup of chopped scallions (or yellow onion), a quarter of a bell pepper, diced, and a few sprigs of chopped parsley.

At this stage, some recipes will tell you to marinate overnight, but as one seasoned blogger notes: “All Haitian grandmas will tell you that if you want your griot right away, you got to take the proper measures for that.”In other words, you don’t have to marinate it overnight to meet authentic Haitian approval.

Add just enough water to the juice to cover the meat and seasonings, and simmer until the chunks are soft enough to push a spoon through—about 45 minutes. Remove the pork chunks from the pot, dry them and slowly fry them in oil until nicely browned on all sides. Then add the onions, parsley and peppers that remain in the pot, and a quarter cup of the liquid, stirring occasionally. When the liquid cooks off, turn off the heat.

Serve the griot with cornmeal porridge, prepared as follows: Bring eight cups of water with a teaspoon of salt to a boil and whisk in two cups of cornmeal. Keep whisking until all lumps disappear. Add crushed chile flakes if you wish. Simmer for 15 minutes, or until the grains are no longer crunchy. As it cooks, add water if necessary, and be vigilant with a scraper so nothing sticks to the bottom. When the cornmeal is soft, cook until it’s as thick as oatmeal, stir in a tablespoon of butter or olive oil, and pour into a wide, shallow dish to cool. Cut into pieces and serve.

There are a lot of flavors going on in this meal. Like the African minstrels of its namesake, griot is a storyteller. It sings a harmony of dissonant notes: the pungent heat of the jalapeños, the sour and sweet penetrating acidity of the citrus, the richness of the pork and its satisfying brown coat. The porridge’s creamy and subtle corn flavor carries the griot, and creates a wonderful juxtaposition of flavors and textures. It’s a pairing so complete that once you start eating them together you aren’t satisfied eating one without the other.

But the reality is, just as Haitian meals are more likely to consist of cornmeal porridge alone, your griot will probably run out before the cornmeal porridge. If so, consider slowly frying slices of the leftover porridge in oil the next morning for breakfast. It develops a crispy skin and nutty flavor that’s surprisingly satisfying.

Perhaps once you’ve eaten their food, you’ll feel connected to the Haitian people in a way that’s different from the connection you felt when you sent money to an earthquake relief organization. It’s a feeling of respect for the culture that created this amazing meal, rather than pity for the poor people whose pitiful world has come crashing down on their heads.

In the end, both respect and pity are worth indulging. After you enjoy your meal, consider how far the money you spent on that pork chop could go toward the Haitian relief effort. Let’s open our wallets as well as our mouths.