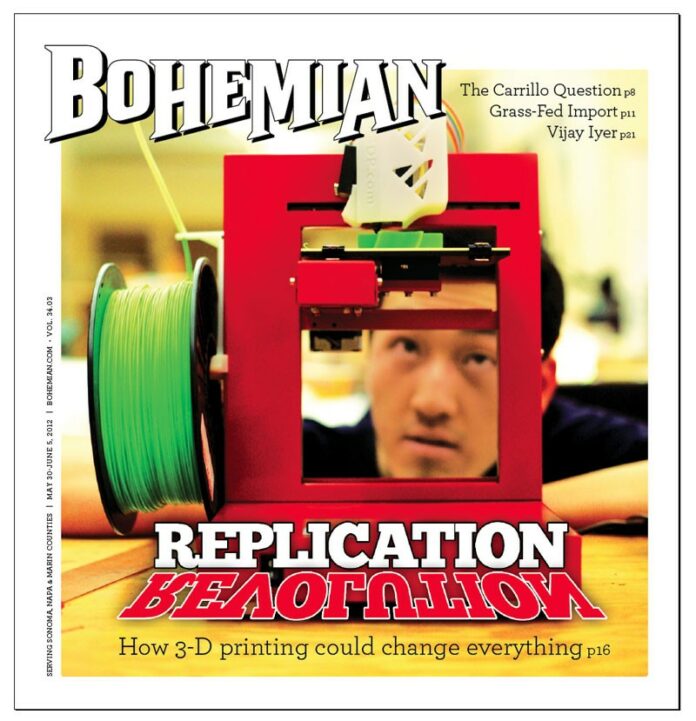 The disruptive new technology that could fundamentally change the marketplace

On Star Trek: The Next Generation, crew members use a machine known as the replicator to make replacement parts for the ship, prepare food and fix Captain Picard’s usual: “Tea. Earl Grey. Hot.”

Creating something out of nothing, the replicator is, sadly, pure science fiction. But using a newly emerging technology, we can design a wrench, a toy, a bike or a flying monkey, and with a click of the mouse, create it. This replicator is a printer, but what it makes is not a two-dimensional image of the design, not a paper model that folds into a 3-D one. This printer creates, quite literally, the object. Three-dimensional printing is here.

The implications of this technology are profound. Sidestepping the channels of mass production, 3-D printing affords individuals unprecedented power of creation. In the creative community that has embraced it, people speak about its potential to transform our global culture. It is, they say, the democratization of fabrication.

Suppose a shop owner needs a bracket with particular dimensions for a custom shelving unit. Instead of buying one, or asking someone to craft one, she can now make it herself. If a designer has an idea for an iPhone accessory but needs a prototype to check the specs, he can print one out and test it.

“Before, a lot of these fabrication tools existed, but were only found in a handful of large corporations,” says Michael Catterlin, general manager of the TechShop in San Jose. “Now there’s this technology that’s potentially going to change the world, and it’s not just for people with advanced degrees. Anyone with an imagination can bring their product to life.”

While 3-D printing is now making a grand entrance into public consciousness, the technology has been in development since the mid-1980s. Early 3-D printers, however, were cost-prohibitive for the general public and remained in the sole possession of companies that could afford the five- and six-figure price tags, and who used them primarily for rapid prototyping.

Due to dropping costs and increasing interest, 3-D printing has trickled down to the level of small businesses and hobbyists, and is headed for consumers. While still a technology in relative infancy, 3-D printing’s potential impact is being compared to the Industrial Revolution. But where the 18th century saw the creation of millions of production jobs in factories owned by big companies, 3-D printing and the fabrication revolution are headed to our homes.

In the not-too-distant future, when we buy products, they may arrive not in boxes but as 3-D files in our email. Objects will be designed or downloaded by individuals and printed out on 3-D printers at home, in 3-D print shops or in community spaces. There’s already a push among some library advocates to bring 3-D printers into libraries, in large part because of the technology’s democratizing potential.

This is a very different business model from the current manufacturing/ shipping/retail model, which relies on factories to build products and shipping companies to deliver them to consumers. Whether stores and warehouses will become things of the past remains to be seen, but being able to fabricate objects in our homes definitely presents interesting possibilities.

Already, remarkable things are being done with 3-D printing. NASA has tested a 3-D printer on the International Space Station, where printing tools and parts makes a lot more sense than waiting for the next delivery. An 83-year-old Belgian woman with an infection in her jaw was recently outfitted with a custom, 3-D-printed jawbone. And the Smithsonian is printing museum-quality replicas of statues for traveling exhibits. Among those already printed: a life-size version of the Thomas Jefferson statue that resides permanently in Monticello, Va.

An even more mind-boggling application of the technology is “bioprinting,” which really is the printing of live tissues and organs. Some in the medical-technology field believe that the idea of people dying while on an organ wait-list could one day be a thing of the past. While years away from clinical trials, organs have been “printed,” and the technology shows great promise.

At some point, we may even have collection bins for waste products that separate materials into chemical elements and store them for future use. In the same way that an inkjet printer stores colors for printing, a 3-D printer (theoretically) could store elements and combine them to print objects on demand.

The Star Trek replicator seems to be getting much, much closer.

The limitations of subtractive machining, including the need for a trained machinist, fall away with 3-D printing. Things that are difficult or impossible to machine in one piece using a subtractive process, such as complex geometric shapes, cylinders within cylinders or curved holes in a metal block, can all be done with 3-D printing.

For hobbyists, 3-D printers, including the MakerBot Thing-O-Matic and the UP! printer, work by heating and printing inexpensive materials such as plastics (including bioplastics) and chocolate (yes, friends, we are printing chocolate). Printers in this range can be picked up for under $2,000. But the price is dropping fast.

Recent Kickstarter campaigns have booted the Printrbot and MakiBot printers from prototype to market, and they both come in under $500. Like inkjet printers, the price on 3-D printers will presumably drop until they hit a point that makes them standard computer peripherals.

“These technologies are like the early days of computers or laser printers,” says the MakersFactory’s Chris Yonge. “At the generally affordable level, they’re still rather crude but at the same time they’re very flexible, and they offer a huge amount of promise for the next generation.”

In addition to MakerBots, the MakersFactory has powder printers, which are the next step up the 3-D printing ladder. They print using a variety of powdered materials including gypsum, nylon, clay—even glass, steel and titanium.

Using this technique, the object is printed within densely packed layers of powder. Wherever the design designates the object, the printer puts the powdered material and a binding agent; where the design designates empty space, the printer prints nonbinding, space-holding powder that is later blown away. With this self-supporting method, designs can have a level of fragility and detail that plastic printers such as the Thing-O-Matic can’t support.

On the industrial level, 3-D printers can build remarkably complex things using the same additive, layer-by-layer process. Last year the Airbike, a customizable bicycle printed out of a powdered nylon that rivals steel or aluminum in strength, was unveiled by the European Aerospace and Defence group, and this year GE is rolling out a jet engine built with some 3-D-printed parts, including the fuel injector.

In addition to being an exciting technological advance, 3-D printing is potentially less expensive than traditional manufacturing (the price of 3-D-printed objects ranges from a few dollars on up), it is a low- or no-waste process, it allows for unlimited customization and it will soon be widely available.

“What I find the most exciting is just the potential, the unknown,” says Catterlin. “It really does seem to have limitless possibilities.

“The technology is exciting and it’s fun to see it print stuff, but just thinking about the bigger picture of what it means and how far it can go—that’s what’s the most exciting to me.”

Michael Weinberg of the Washington, D.C.–based public interest group Public Knowledge recently wrote a white paper on fabrication and its legal and social implications, titled It Will Be Awesome If They Don’t Screw It Up.

He says, “3-D printing technology is poised to have a huge impact on how people create and consume and think about objects. It has the potential to be a very disruptive technology.”

That’s a good thing, but also contains big risks, legal and otherwise. Part of Weinberg’s job with Public Knowledge is to get out ahead of the curve and make sure laws aren’t enacted in a knee-jerk reaction to this new thing.

“The last big disruptive technology was the internet,” Weinberg says. “With it, some industries embraced it and engaged with it, and some saw it as a threat and tried to get laws passed and make it harder to do innovative things with it.”

He says tools that replicate objects, such as DVD burners, photocopiers and manufacturing tools, already exist, and there are already laws that work to prevent their misuse.

“3-D printing is interesting to me because it’s dealing with physical objects and you don’t have this thing where everything connected with it is protected by copyright,” he says. “We’re now in a world that is not wrapped up in intellectual copyrights; we’re free to create and build upon other ideas.”

Weinberg gives as an example the fact that you can’t copyright an object such as a desk. Anyone can measure a desk and then build or modify one to fit their own needs.

Perhaps the most significant economic implication of 3-D printing is that it is catalyzing a merging of industries. Dave Britton, cofounder of the MakersFactory, an educational and fabrication workshop, or “maker space,” in downtown Santa Cruz, points out that 3-D printing is bringing together industries in previously unimaginable ways.

“People talk about this being a trillion-dollar industry some day,” he says. “I talk more about the convergence of industries: media, medicine and manufacturing are all in the same plane and imploding at the same rate. Technology is driving them to come together. You can’t talk to someone in medicine or optics without talking in the same way we talk about what we’re doing here.”

Manufacturers, surgeons, teachers, builders, scientists and designers are all looking at ways to use the ease of customization and quick turnaround inherent in 3-D printing to their benefit.

While people already in the workforce will have some re-skilling to do to familiarize themselves with computer-aided design software and 3-D printers, Catterlin says, young people will have the technology integrated into their lives as yet another tool on an ever-expanding digital continuum. He shares a story about his boss’ seven-year-old year old son, who designed and printed custom clips for a bandolier to hold his Nerf darts. In Santa Cruz, the MakersFactory has kids who attend the adult classes and do quite well; as cofounder Chris Yonge says, “They don’t know they can’t do it.”

When the methods of fabrication become available to everyone, this new brand of “makers” say, the potential for human creativity and innovation expands exponentially.

“We can say that in the future we’ll all be able to print a new phone or kidney or something,” says Weinberg, “but that’s really just an extension of what we have today. We’ve learned with the internet that if you give people tools, they do weird and unexpected things with them. 3-D printing is just starting to break through to people who are not engineers or designers, and they’re starting to use it in really unforeseen ways, making all kinds of interesting developments.”

“Once people realize that the barriers are no longer there, they will start to become more adventurous,” Yonge says. “People will realize you don’t have to rely on a big store or paying a ridiculous price for something that doesn’t really fit your needs. You can make it yourself.”