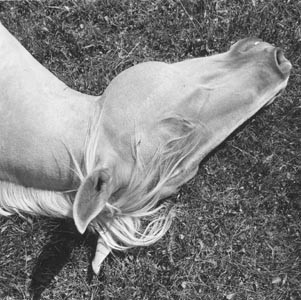 Leepa Asleep with Grass in Her Mouth.

RARENESS is something of an art form at the Falkirk Cultural Center. For instance, if you imagine the art gallery at the San Rafael-based arts facility to be the usual sterile expanse of pale wall space, you may be surprised to learn the center is housed within the private rooms of an 1888 Victorian building replete with bay windows and fireplaces.

And to add to the rareness, you may also be surprised to learn that the Marin Arts Council routinely awards unrestricted grants to local artists–an unusual move in a field where grants usually come with a spider’s web of strings attached. Starting Friday, Jan. 19, the Falkirk Center will feature the work of the 14 grant recipients for the 1999/2000 Individual Visual Artists Grantee Showcase.

“The goal is to show the public some of the most outstanding work currently being created by Marin artists and to support the awards for visual arts,” explains Beth Goldberg, curator for the center. “It’s rare these days to find unrestricted grants funding for the arts.”

DeJung adds that the 1999/2000 call for artists attracted a wide range of entries in the four visual arts categories–22 crafts entries, 103 paintings, 31 photographs, and 28 sculptures.

Grantees in each category were selected by a panel of three jurors residing outside Marin County who are professionals in the discipline. This year’s judges included Susan Martin, a sculptor and academic adviser at the San Francisco Art Institute; Nora Kabat, associate curator for the friends of Ansel Adams Center; and Philip Linhares, chief curator of art for the Oakland Museum of California.

Goldberg says the judges selected a variety of artists: “Some are established and have been working for some time and are known, not nationally but in Marin, though not all.”

San Rafael painter Jorge Gamboa, 38, says he is surprised to get the award. “This is the third time I’ve tried for one of these grants,” he adds.

Gamboa, who works out of a small home studio–which he says county officials recently ruled to be illegal–says he received some $2,000. He describes his oil paintings as figurative, with some narrative elements thrown in. “I get an image and then try to put in narrative,” he explains. “It’s the old thing of a picture being worth a thousand words.”

All artists are slated to be in attendance at the opening event. The exhibit will show 36 pieces with works from each visual arts medium. Once again, the range of work is extensive. The paintings alone range from landscapes, to abstracts, to darker pieces reminiscent of the post-Vietnam War era.

In addition, Fairfax-based sculptor and grant recipient Lorraine Weglarz will create an installation on-site to enhance the Falkirk gallery.