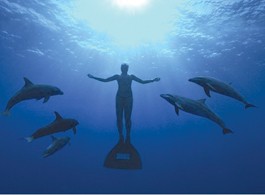 Seventeen-year-old Schuyler Schwartz is on a mission. With the help of adults and peers, Schwartz has launched a teen-to-teen, pro-action film festival highlighting injustices plaguing human and animal life. The cause closest to her heart is the plight of the dolphin.

“I’ve always been an animal lover,” says Schwartz, who last week graduated from University High School in San Francisco. “When I watched The Cove, I was really upset and wanted to get involved. So I looked on the website and talked to the head of my school’s community-service program about showing the film.”

Not only did she bring the film to her school for peers to view, but she took it to other schools as well, and soon after found herself creating the Imagination Film Festival, which includes the films No Impact Man, The Cove and Food Inc. “It kept evolving,” explains Schwartz. “The more I talked to people, the more they became interested.”

According to Schwartz, some of the teens she spoke with told her they felt moved by the messages in documentaries but didn’t know what to do. So Schwartz and her teen colleagues came up with action steps.

“Our goal is to educate people and make these films more widely known and, more importantly, to tell people what they can do after the film. Otherwise, it’s incredibly depressing,” explains Schwartz. “We made a Power Point presentation of 10 simple things you could do about each cause, and it leaves the audience members feeling excited and motivated.”

“I really want to continue doing film festivals,” said Schwartz. “We made a promo video to try to get other high schools and more people involved, to get a grassroots thing going. It’s really a fun project to do. It’s a really positive experience.”

The highlight for Schwartz was hearing that Richard O’Barry, trainer-turned-emancipator of dolphins, had agreed to appear in support of her festival. Although scheduling conflicts prevented his appearance this time, Schwartz was nevertheless thrilled. “He’s been kind of my idol for a while,” confessed Schwartz. “He was passionate about something and took action, and was able to accomplish a lot.” (Dolphin slaughter in Japan was allegedly stopped as a result of his filming The Cove.)

When Schwartz takes her film festival to college with her this fall, maybe O’Barry will stop by and shake the hand of a fellow activist and friend of the dolphins.

Voice of the Bees