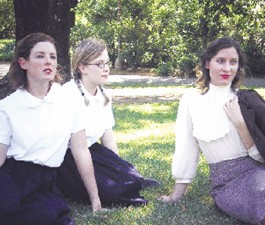 SRT's 'Brodie' a ploddingly paced portrait of the past

The Prime of Miss Jean Brodie is a complex character study that, when it first premiered on Broadway in 1968, seemed to be saying more about the radically shifting social and sexual attitudes of the late 1960s than the 1961 Muriel Sparks’ novel, upon which the play is based, said about the stringent social climate of 1930s Scotland. What the story brings to audiences in 2006 is less clear.

Miss Brodie, the most popular teacher at an all-girls boarding school, eschews the official curriculum in favor of her own brand of education. She tells her students stories of her romantic adventures, talks to them freely about sex and political self-sacrifice, takes them off-campus for unauthorized trips to the museum and to parties at her lovers’ country estates. She also occasionally encourages her underage students to embark upon love affairs with married men.

In a new production of Brodie at the Santa Rosa Junior College’s Summer Repertory Theatre, straightforwardly directed by Carla Spindt, playwright Jay Presson Allen’s seriously dated profile of an unstable intellectual does little to make the story seem anything but, well, seriously dated.

The most interesting element that Spindt and actress Margrett Head, who plays Miss Jean Brodie, bring to this production is an interpretation of the titular character as more than just a headstrong dreamer, a supremely confident woman in a day and age when such attributes were considered aberrant in females. Rather, in this production, Miss Jean really does seem a bit demented, dangerously and foolishly committed to her ideals and ideas, and quite possibly psychotic.

Head brings the right amount of charm and attraction to Brodie. When she waltzes into her classroom, proclaiming her girls–especially her chosen set of favorites–to be the “crème de la crème,” it is easy to see why her pupils are so smitten with her. She sets aside history lessons in favor of tales about her dead fiancé, and when challenged by the school’s officious headmistress, Miss Mackay (an excellent LaRena Iocco, who finds conflicting shades of humanity in what could have been a one-note role), the girls eagerly and expertly lie to protect their teacher. Brodie’s crème de la crème are obviously very well trained.

Much of the story, which spans five years, deals with Brodie’s attempts to fend off dismissal from her position and with her one-woman crusade to train one favorite in particular to become a sexual object whose amorous adventures will eventually outshine her own. In the 1960s, with the sexual revolution hitting its peak, this might have come off as appealingly counterculture and brave; today, Brodie’s actions seem beyond reckless and border on the criminal.

When one of her students ultimately does confess to sleeping with Brodie’s ex-lover, the second-rate painter Teddy Lloyd (William O’Neill), Miss Jean isn’t the least bit appalled that an underage girl is having sex with a predatory older man; she is much more upset that it’s not the student she had in mind.

The psychological complexity of the story still contains plenty to chew on, but the sluggish pacing in this production is a hardship, and when the girls begin to age, it becomes confusing keeping track of who’s who.

However, many of the actors portraying students are first-rate, especially Laura Sudduth as the resourcefully Judas-like Sandy, and Jessie Lagoy as the tragic hanger-on Mary. As Jennie, the girl upon whom Miss Brodie projects all of her sexual ambitions, Laura Hartley nicely portrays a young woman swelling with fragile pride under the constant praise of a beloved teacher.

The set by Kent Homchick is an appropriately off-kilter assemblage of detailed set pieces–classrooms and offices and art studios–and Ron Reisner’s lighting places the whole affair in a dreamy, shadowy world that seems fitting for a show in which shifting memories from the past are resurrected and dissected in the all-too-modern and unforgiving present.