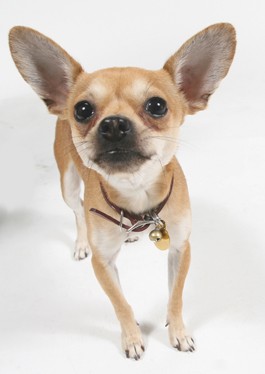 As far as membership in that sector of society still safe to belittle, we who own smaller canine breeds rate right up there with rednecks and the obese. Stereotypes abound, both for us and our pint-sized pals. We’re airhead heiresses with a Shih Tzu parked in our Gucci bag or post-menopausal women who’ve restocked their empty nests with furry surrogates.

And oh, how they mock those poor dogs not quite tall enough to drink out of the toilet bowl. If a movie needs a punchline, a throwaway visual joke, bring in the Chihuahua. Or a bow-bedecked papillon. Bantamweights really do need their own Al Sharpton to do a little barking on their behalf. Perhaps it’s time to dispel a few of those tired old myths about us and our “kids,” as so many of you are convinced we call them.

Oh yeah? Tell it to the American Kennel Club, which yearly ranks the most popular breeds. Almost half of the 10 top breeds to cycle up and down AKC’s list for the past several years would barely clear your average Labrador’s chubby thighs. We’re talking Yorkies, dachshunds, poodles, Shih Tzus, miniature schnauzers, Pomeranians and Chihuahuas. As long as a burgeoning population of humans continue to cram themselves into ever-smaller living conditions, the little ones will eventually loom over the bigger lunks.

Not really; it’s just more grating. Those tiny vocal chords make for a higher pitched yap. They’re trying to communicate the same thing as German shepherds or rottweilers. They’re anxious, they’re lonely or they’d really appreciate it if you weren’t all up in their grill. One sounds like a very large man asking if you want a piece of him; the other comes across like a kindergarten bully.

Myth #3: They snap and bite more often than the larger dogs.

Big dogs that bite will hurt people. They quickly change their behavior or end up on death row at the local shelter. Tiny jaws, however, rarely do much more than nip and annoy. Some of their less responsible guardians write it off as a small downside of a small dog.

It’s true that your typical Chihuahua will not joyfully run up to slobber all over you like its bigger relatives. You, too, would be a little nervous if everyone you met were as tall as a six-story building. Additionally, most canines were originally bred to do some type of chore: bring down lions, retrieve birds, round up sheep. A Chihuahua was bred specifically for one job: companionship. That would be companion—singular, not plural.

Myth #4: The smaller they are, the harder they are to housebreak.

Yes, but it has nothing to do with bladder or brain size. Like their stealth-pooping, they just get away with it easier. Discovering where a Great Dane dropped its load is a lot easier than spotting droppings smaller than your pinkie. Trainers and dog behaviorists agree that the best way to housebreak a puppy is to catch it in the act and quickly carry it outdoors while pouring on the praise. A youthful St. Bernard tends to make itself known as it prepares to squat, while a toy breed in its puppyhood can easily disappear behind a moderate-size potted plant. Also, it’s easier to forgive a creature that leaves Jimmy Dean breakfast links versus a steaming mini-Everest.

Myth #5: Only women and gay men leash themselves to dogs with balls the size of kibble.

As a middle-aged broad who tools around town with a car load of tiny yappy dogs, I’ll be the first to admit that I fit quite snugly into this general preconception. So I would like to bestow the Golden Milk-Bone Award to Mickey Rourke, who attended this year’s Academy Awards with a picture of his recently deceased Chihuahua, Loki, worn as a pendant around his neck. Showing further class, Rourke thanked all his Chihuahuas, past and present, when he won the Golden Globes for his turn in The Wrestler. He spoke for the legions of big, hunky men who don’t think twice about a toy breed or two wrapped in their musclebound biceps.

It takes a real man to love a lapdog. A confident man, a fella comfortable with his sexuality. When hip-hop culture starts to venerate Pomeranians instead of pitbulls in videos, on T-shirts and in lyrics, we may grudgingly trust there actually is something inside of those baggy crotches they so love to grab.

Myth #6: We like our little dogs better than humans.

Finally, it’s time to address this misguided assumption that our tiny charges take the place of children we wished we had. There are plenty who prefer a small creature that takes up to four years to housebreak. Many more have committed themselves to young companions who scream “I want,” fling food or collapse in a sobbing heap each time they are taken for a walk in public. When our Pekingese reaches the human equivalent of 14 years old, we do not worry about drug abuse, gang affiliations, morbid adolescent poetry or wonder what they do on the internet hour after hour. Our “kids” set us back about $80&–$100 for a six-week school session, not 15 grand a semester. We do not fear they’ll lose their job and move back in with us. They never left.

We don’t begrudge you and your muscle dogs (unless you’re Michael Vick, of course). We’d just like a little respect. Think of us as dedicated environmentalists, just trying to leave an ever smaller paw print on the planet.