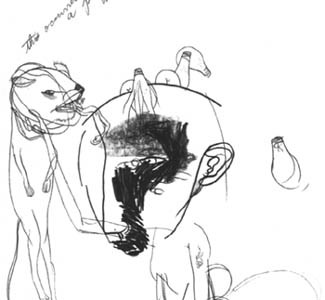 GIVE THREE people one thing to look at and they will see three different things. Give three artists the mandate to create within the confines of one medium and expect three vastly different approaches. The “Works on Paper” exhibit running through July 28 at the MeSH Gallery in Sebastopol offers a primer on this simple truth.

“Works on Paper” collects together Graton painter Claude Smith, Sonoma State University art lecturer David D’Andrade, and East Bay artist Julie McNiel. The fact that their work shares the same room is the beginning and the end of any similarity among the three.

McNiel’s pencil drawings dominate the show, with nine framed works and an entire wall devoted to her unframed, pinned-up sketches. Trained as a painter, with a strong background in costume and set design, McNiel surely has a sly slice of the English major lurking in her as well. Her chatty drawings are covered with thoughts, droll statements, and punning text. Frankenstein creator Mary Shelley is an evident preoccupation, and McNiel baldly titles one humorous work–which features a monocled girl with a Frankenstein-style forehead and an “I * Daddy” anchor tattoo–Unfortunate Literary References. But should you have to be able to read to enjoy that which employs the language of image?

“This is just about the drawing,” answers MeSH owner Meg Hitchcock. “The narrative is second to that.” And draw McNiel can. She presents strong, confident lines in strong, confident composition, the framed pieces achieving an elegance that is pleasing and flirts with downright beauty, as in Processes: Lost Coast.

Less successful to this writer’s eye are the tacked-up works, which have the feel of a notebook torn apart with little discrimination. Sure, there’s a voyeuristic pleasure in reading someone else’s private doodles, but it’s vaporous rather than lasting.

Where McNiel displays a loose fluidity, D’Andrade’s tight, obsessive pen-and-ink work coils in upon itself. Created in a deliberately automatic style of consciousness stream, D’Andrade’s self-described “viral” works bubble and bulge in on themselves. Woolly body parts crowd up out of the biological spew, a boil that is anxiously placed smack amid the page all alone. In his artist’s statement, D’Andrade explains that he is speculating, using the guise of scientific illustration, on the infinitesimally tiny microbes that feast within us. Queen Virus and Sub-Unit is among the most successful of D’Andrade’s tense offerings, conveying as it does a majestic smacking joy that is almost cakelike in yummy construction and yet still has the terrible triumph of a predator. Even before learning the title, the film Alien kept springing to mind.

And then there’s Claude Smith. G-Spot Variations, Smith’s five multimedia collage pieces, are the result of his efforts to bring the west Sonoma County community of Graton together over art. Leaning on a car outside the opening-night reception, Smith explains that “regular people” often feel intimidated by the art world. In an effort to offer entry to this seemingly shuttered aerie, he “solicited stuff from friends.”

And while the thick, organic collages Smith constructed as a result of his friendly overtures do reference genitals, G-Spot is more than gynecological. “I wanted to find this inside spot of the intense pleasure that I know the artmaking process to be and share it with others who may not have experienced it,” Smith says.

The resulting works, two of which are unfortunately hung behind MeSH’s frame-shop counter, resound with a high-art salute to such collective work as cave paintings. With a unifying henna-red color field dominating each piece, gorgeous bits of requested “found” work are married in responsive abstract composition.

With a troika of different sight lines, the “Works on Paper” exhibit exposes three paths, and all glimpse that which is less traveled.