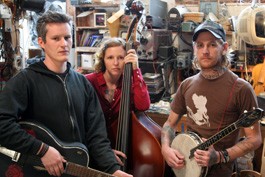 Success couldn’t be sweeter for the Devil Makes Three, a rough-edged bluegrass trio who specialize in selling the soul of country and ragtime music to the devils of punk rock and hard blues. A rare breed in a squeaky-clean, post–O Brother bluegrass world, the band nonetheless carries a hopeful, wide-angled wisdom that reflects the tumultuous world around them.

“I’ve never hopped a freight train, but I’ve definitely done a hell of a lot of traveling,” said 28-year-old frontman Pete Bernhard in a 2007 Bohemian interview. “I grew up in Vermont, and I drove across the country to California, then I moved to Nashville, then to Olympia . . .

You know, I just didn’t really know what the hell I was doing. I was driving around in circles, basically.”

Whatever he picked up along the way has certainly been propelling the band, which features the sturdy upright bass of Lucia Turino and the stunning banjo and guitar work of Cooper McBean, both also Vermont natives. And while the Devil Makes Three are fast becoming a well-known headliner at large clubs, the trio started out like any good band: playing cramped house parties, a tradition that came to an end when simply too many people began showing up. “It just sucked,” Bernhard said without too much regret in his voice. “A lot of people would come and break shit, and then the person who owned the house is pissed off at you, and you’re like, ‘I don’t know who these people are!'” The Devil Makes Three’s self-titled debut album, re-released on Milan Records last year, is a deft crosspollination of the austere and the animated. Bernhard’s always been into older music, from the time his brother bought him a Willie Dixon box set on Chess Records when he was 10 years old. “But a lot of the stuff that I write is political, and that definitely comes from punk,” he said. “Hopefully, the energy of our show emulates the feeling of a punk show—just high-energy and fun.”