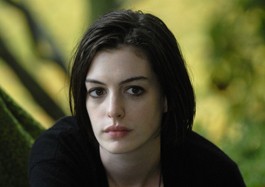 Mixing two great flavors that don’t belong together, Rachel Getting Married has Jonathan Demme trying out a French New Wave&–style profile of a guilty prodigal daughter. He stages this intimate character study as what Spike Lee calls a “joint.” More than just slang for a film, I would interpret that term as referring to Lee’s work at its most dense, as social dramas acted out against a thick blend of audio mix, boutique clothing and art direction.

One of the best examples is Demme’s own Something Wild. The art direction isn’t so distracting in that meaty, sexy love triangle, any more than it is in Demme’s tasty, trifling remake of Charade. The surfaces and the audio wallpaper of Rachel Getting Married are maybe too enticing. Rarely have I been so overwhelmed with the feeling o “I must have this house, even if all the people in it have to get out, even Robyn Hitchcock.”

The setting is an early fall country wedding at a rambling Connecticut Victorian. In the genteel funky interiors, we see more acoustic musical instruments scattered around than in a Lark in the Morning store. Rachel Getting Married is more of a jam session than a movie, with the muffler-wrapped Hitchcock leading an alfresco musical group in the backyard.

For reasons unexplained, the theme is Indian chic. The bridesmaids come wrapped in lilac-colored saris, and the centerpiece is a Wedgwood cake with decorative elephant and howdah. Paul (Bill Irwin), the lord of the manor, delivers a line about how the duties of a father of the bride are twofold: to grin like a jack-o’-lantern and to keep writing checks. His wife, Carol (Anna Deavere Smith), has even fewer duties; she just chokes back tears and looks maternal. Irwin is so abstracted that you never get answers to questions like who are these people and how do you get a house like this.

The daughter, Rachel (Rosemarie DeWitt), is marrying into an African-American family, although the groom is as unstereotypical as can be. The prenuptial dinner unfolds as a good-feeling harmonious blur, set in a room lined with silvery Russian icons. “This is what heaven is like,” says an aged lady. All the disharmony is embodied by the film’s real main character: the witchy sister Kym (Anne Hathaway), a former-model-turned-train wreck, just out of the latest stretch of rehab.

As Kym, Hathaway deglams seriously. Her hair is self-cut and indifferently washed. She chain-smokes and croaks out her putdowns with a crowlike voice. But in repose, nothing can take the shock of beauty away from the wide mouth and wider dark eyes. In moments of reacting, she nails it down. Hathaway is a fine reactress, and that’s a start.

Her toast to the bride, where she introduces herself as “Shiva the Destroyer,” is a good sharp joke, considering the Indianoisieries of this event. In this film of Jaglomian looseness, Hathaway wires things up. And Kym holds her own in a clash with her mom, Paul’s first wife. Debra Winger plays this silky queen of denial in a welcome return to the screen, proving herself as an actress too tough for the kind of films they make in 2008.

Still, Rachel Getting Married ends up as a clash of atmosphere and star. Ultimately, our sympathies have to be with the former, with the people lucky enough to bathe in this distractingly rich eclecticism shot by Declan Quinn with the self-declared intention of creating “the most beautiful home movie ever made.” The film’s strategy is smart on one level. It doesn’t blame the family for Kym’s raging addiction. Still, there’s none of that sense of the nibbling forlornness that made the similar Margot at the Wedding more believable.

The way Demme sets up this marvelous party, you have to ask what kind of close-minded person could resist such a polycultural tornado. The answer: some will. Rachel Gets Married is a little out of it. The testimonials at the wedding seem endless, discursive; the dancing goes on for a long piece after the emotional climax of the film; and Jenny (daughter of Sidney) Lumet’s script is sometimes vague. Truth is, there’s always more than one pooper at any party.