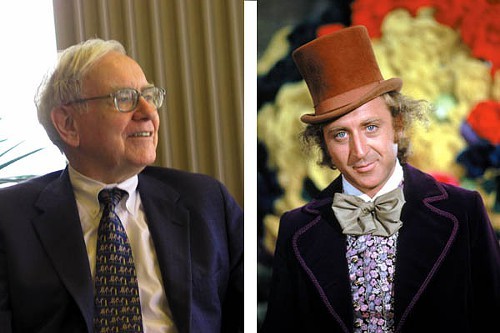 I’ve always thought the Willy Wonka scenario, where an eccentric candy maker holds a contest to win a tour of his mysterious factory and a lifetime supply of its beloved chocolate by issuing golden tickets in five random chocolate bars around the world, was a genius idea. Even seeing it for the first time as a child, I asked my parents if it was real because if so, I wanted to go buy that chocolate. Well, if someone’s willing to give me about $75,000, I could actually come close to that dream.

The auction for a tour of the See’s Candy factory in South San Francisco (with unlimited tasting) is currently bid up to $40,000, though it’s estimated value is $75,000. That’s a lotta chocolate, but the exorbitant price is really for the tour. You see, See’s is like Wonka’s chocolate factory: noooobody ever goes in. And nobody ever comes out. Well, I’m sure the employees do, and probably other relevant people, but not the general public. Though if I worked there I might just set up a little cot next to the dark truffle station at night and never come out.

The tour is for up to four people and includes a meet-and-greet with Warren Buffet. Buffet, probably the smartest investor on the planet, bought See’s for $25 million in 1972. In 2011, it made $376 million, and $83 million of that was pure profit. He won’t be leading the tour, though. The guy doesn’t make the chocolate, he just makes the money from it. He will, however, show the proper way to eat a Bon-Bon, which will make for a great story to tell at every food event ever. “You had dinner with the Dalai Lama? That’s cool, but let me tell you about how Warren Buffet showed me how to eat a Bon-Bon…”

This is a great idea, but here’s an even better one: just copy the Willy Wonka scenario. Mr. Buffet, I promise you will sell SO MUCH candy that it will be worth leading the tour yourself. Just don’t make it about finding a young boy to take over your candy factory, and refrain from taking a crazy flying elevator out through the glass ceiling and flying around town (insurance, as you know, would be a nightmare for this). All I’m asking is to be the official media correspondent for this tour. I’ll need a photographer as well, but I’ve already got one lined up. We most graciously accept your offer in advance. You have my contact info. Let’s make it happen.