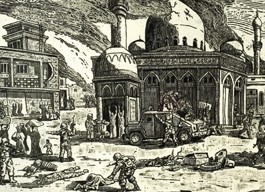 Sandow Birk agrees that the timing could have been better. But he’s not to be blamed: the Long Beach&–based artist couldn’t have foreseen that a loudly reviled Islamic center would be proposed three blocks from Ground Zero. He couldn’t have guessed that an attention-seeking Florida pastor with just 50 parishioners would grab international headlines by threatening to burn a holy book. And, truth be told, he didn’t really notice the opening date of his newest East Coast exhibition. All of which curious circumstances surrounded him when he found himself in New York City this Sept. 10, the eve of a particularly rancorous anniversary of the Sept. 11 terrorist attacks, about to open a show of work entirely devoted to the Koran.

Called American Qur’an, the project is only a third finished, Birk having recreated some 92 pages of the 220-plus-page project. He showed the first two installments in San Francisco and Los Angeles to mild response. “There’s been very little criticism,” Birk says, talking by phone from a loud NYC street corner. “Mostly from people who haven’t seen it and from right-wing Christian groups saying things like Americans shouldn’t be reading the Koran or that exposing Americans to this was wrong.”

Which doesn’t mean that even thinking people might find it controversial. Using an 18th-century English translation of the text, Birk has lettered the surahs, or prayers, in a graffiti font laid over images he’s wrought to illustrate the holiest book of a religion whose strictest adherents disallow reproduction of the human form.

Because that’s the kind of thing that Birk does do on purpose. Using historical references in a contemporary update has become one of his signatures. He’s redone Dante as a both a film—2007’s Dante’s Inferno, which used puppets in lieu of real (and expensive) actors—and with collaborator Marcus Samuels tackled the entire Divine Comedy in a completely modern version of the tripartite 14th-century Italian text.

In 2000, he debuted his response to Ken Burns’ lavish Civil War documentary series with In Smog and Thunder: Historical Works from the Great War of the Californias, in which Los Angeles (Smogtown) battles with San Francisco (Fogtown) across a series of oversized canvases whose layout and structure mimics the great epic war paintings of the American Revolution. In Smog and Thunder exhibited at what is now called the Sonoma Valley Museum of Art in 2001 and tickled audiences with its use of unexpected juxtapositions (Mickey Mouse boldly holding a “Free ATM” sign as a battle flag) as much as it sobered them (the Golden Gate bridge in ruin).

Birk’s work returns to the North Bay with the Sonoma County Museum’s opening of The Depravities of War, a series of oversized woodblock prints created by the artist in 2007. Earlier, Birk had been invited by Hawaii’s prestigious HuiPress to do a residency. The work evolved as the answer to a problem: Birk wasn’t trained as a printer and didn’t know how to best tackle a project with the press.

“They said just come on over and hang out and we’ll see what happens,” Birk remembers. “When I got to Hawaii, I started going through their library and in doing that, I stumbled upon the works of Jacques Callot on which the project was based.”

In the 1630s, Callot released a series of 18 oversized prints titled The Miseries and Misfortunes of War. Graphic and grisly even to the modern eye, Miseries inspired Francisco Goya in 1810 to embark upon The Disaster of War, a decade-long endeavor that produced some 90 etchings recording everything from torture to famine.

“I was really familiar with Goya’s work from the 1800s,” Birk continues. “Later, reading about them, I learned that Goya was very aware of [Callot’s prints] when he did his project 200 years later. Now it’s 200 years since Goya, and I thought, ‘This could be the third print project about warfare.’

The resulting series exactly mimics Callot’s original in layout and composition—with a marked difference. Rather than young French men standing in a civic plaza signing on as soldiers, Birk’s updated American inductees enlist at a table festooned with a banner promising “free college,” McDonald’s and Chevron signs blighting the near horizon. Where Callot shows a prisoner captured, Birk casts images now sadly recognizable from Abu Ghraib prison. And so on.

The museum pairs select Callot prints with Birk’s in this exhibit so that viewers can closely track how one artist riffs on the other. For SCM education director Jennifer Bethke, this coupling also underscores a sober theme. “Horrific actions beget horrific actions, and there’s a cycle of violence in each of these,” she says.

Bethke says that Birk—who is just 48—represents a new generation of artist, one who re-embraces figurative painting, which was generally shunned for the last half of the 20th century, and has a reverence for legacy. “He is so in tune with the contemporary moment,” she says, “so interested in social issues and political issues and yet always casting an eye backward, thinking about artistic predecessors and how they took on their contemporary moment and how he might take on that mantle himself.”

Bethke stops for a moment to consider. “It’s not always an easy relationship with him,” she says, “but it is open and creative and lively.”

Next ArticleSeptember 15-22: Across the Bridge