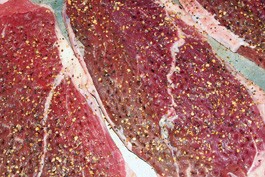 Want Virus with That?

In 2008, Mexican authorities rejected a shipment of U.S. beef because the meat exceeded Mexico’s regulatory tolerance for copper. The rejected meat was returned to the States where it was sold and consumed, because the United States has no regulatory threshold for copper in meat.

Incidents like this are why the food safety arm of USDA, known as the Food Safety and Inspection Service (FSIS), is under scrutiny. While the public has gotten used to microbes like E. coli and salmonella threatening the nation’s meat supply, and while safety agencies make food-borne illness a high-profile priority, contamination of meat by heavy metals, veterinary drugs and pesticides has been slipping through the bureaucratic cracks.

Microbial contaminants can be killed by cooking, but chemical residues aren’t destroyed by heat. In fact, some of these residues break down into more dangerous substances when heated, according to the “FSIS National Residue Program for Cattle,” a recent report by the USDA’s Office of the Inspector General (OIG).

The routes by which veterinary drugs enter the human food chain trace a disturbing portrait of how large dairy farms operate. Sick dairy cows are given medications to help them recover, but if it appears an animal will die, it’s often sold to a slaughterhouse as quickly as possible, in time to kill it before it dies. That way “[the dairy farmer] can recoup some of his investment in the animal,” according to the report.

In such cases, medications may be consumed along with the meat. Such drugs include ivermectin (which can act as a neurotoxin in humans), flunixin (which can damage kidneys) and penicillin (which can cause life-threatening allergic reactions in some people).

The meat from sick dairy cattle is low-grade, and is usually turned into burger and sold to the sorts of buyers who stretch their dollars furthest, like fast food chains and school lunch programs. But veterinary drugs are also finding their way into an upper echelon of meat: veal.

The milk produced by medicated dairy cows is barred from sale to human consumers. Unfortunately, no law prevents this “waste milk” from being fed to veal calves, the meat of which sometimes tests positive for these drugs. As with meat from sick dairy cows that tests positive for antibiotics, no measures are taken to recall such veal or penalize the slaughterhouses that produce it. One slaughterhouse, according to the report, amassed 211 violations in 2008 and was still considered by the FSIS as a place where contamination “is not reasonably likely to occur.”

Such failings can be traced to a 1984 memorandum of understanding among the FDA, FSIS and the Environmental Protection Agency. These three agencies agreed to appoint senior executives to oversee a group called the Surveillance Advisory Team (SAT). The SAT was supposed to manage interagency collaboration aimed at preventing the entry of chemical residues into the food supply. But according to the recent report, “high-level officials from the agencies involved do not attend [the annual SAT] meetings.”

In addition to veterinary drugs and heavy metals, agricultural pesticides also find their way into the meat supply, often through contaminated food and water. While the SAT agencies jointly determine which pesticides should be tested for, it’s the FSIS that actually conducts the tests. In recent years, the FSIS has tested for only one of the 23 pesticide classes it is charged with testing for: chlorinated hydrocarbons / chlorinated organophosphates. The FSIS places blame on its limited budget and a lack of guidance regarding the minimum levels the agency is supposed to enforce. The OIG report calls the oversight unacceptable, saying “the SAT needs to seek executive-level involvement from all three agencies to resolve differences and, if necessary, to determine the best method for obtaining the needed testing resources to ensure that the highest priority substances are tested.”

After raking the muck, the report makes recommendations on how the interagency collaborations behind the SAT could be improved. The report also mentions that the FSIS has agreed to many of its recommendations, such as increasing testing at plants that slaughter veal and dairy cows—where 90 percent of the residue violations have been detected.

While the OIG appears to be making a sincere effort to improve the framework that’s supposed to protect our food, it could also be argued that these efforts amount to enabling an industry that remains rotten at its core. Rushing sick cattle to slaughter before they die or feeding tainted “waste milk” to veal calves are practices that would be better eliminated than improved, but in fairness, that isn’t within the mandate of the OIG to decide.

So while improvements appear to be in the works for the production practices behind mystery meat and mystery milk, the system shows little sign of becoming inherently less disgusting. As long as customers keep demanding cheap meat, cheap meat will continue to be produced.