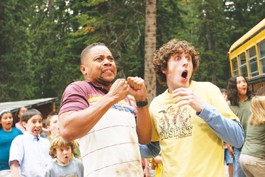 Two decades after 'Boyz n the Hood,' movie studios continue to release films for black audiences on Wednesdays instead of Fridays

Daddy Day Camp stars Cuba Gooding Jr. as a hapless counselor of a kid’s summer camp gone awry, and it contains the usual hijinks of the genre—vomiting children, out-of-control school buses, lovestruck nerds—all while championing the charming wiles of children and the importance of family. It’s your basic light family comedy, except for one barely noticeable distinction.

It opened in theaters last month on a Wednesday.

In one of the small, almost undetectable instances of race determining certain factors in the entertainment world, many so-called urban movies—industry doublespeak for films aimed at black viewers—open on Wednesdays instead of the more traditional Fridays. It’s no secret, and although the studios that set release dates are reluctant to talk about it, most people in the movie industry are aware of the practice.

Wednesday film openings are rare, and can usually be sorted into one of three groups: a huge blockbuster with high expectations, timed early to divide large crowds and maximize opening-weekend box office grosses; a film scheduled during a holiday week, which capitalizes on the public’s vacation time; or a limited opening in New York and Los Angeles intended to build interest before wide release.

The Wednesday films that don’t fit into any of these categories, such as Bones, Get Rich or Die Tryin’ and The Wash have a category—and a color—all their own.

“It was right around Boyz n the Hood, Do the Right Thing, Juice, South Central,” remembers Chris Johnson, manager of the Roxy Stadium 14 multiplex in Santa Rosa, one of hundreds of theaters that screened Daddy Day Camp. “Studios talked about them as being ‘project films,’ but basically everybody realized what they meant.”

The practice goes back to the early ’90s, when most movies with predominantly black characters were about street gangs and drug running, and when an outbreak of shootings and gang violence plagued openings for films like Colors and New Jack City. As a result, the openings for the majority of movies aimed at black audiences were moved to Wednesday, with the unspoken aim of keeping black violence away from white Friday night crowds.

So why does the practice persist today, and for such harmless films? Are studios really scared of the PG-rated Daddy Day Camp attracting machine-gun-wielding crack dealers hell-bent on violent rampage bringing their random gang shootings to crowded theaters and killing whitey?

Well, not exactly. Over the years, the practice has dwindled somewhat, but when studios apply old reasoning to ridiculously light fare like Beauty Shop and Johnson Family Vacation, both of which opened on a Wednesday, it begs speculation. Could there really be concern that Queen Latifah’s hair-salon wisecracks will incite ticket-buying customers to beat each other’s asses?

Daddy Day Camp was made by Revolution Studios, a company well familiar with the “urban” Wednesday release: Are We Done Yet?, starring Ice Cube, and White Chicks, starring the Wayans brothers, were both Revolution films. I spoke with two separate studio representatives about the Wednesday release scheduling for these movies, but before I could even utter the word “urban,” their lips zipped: no comment.

A representative from Sony Pictures, the distributor of Daddy Day Camp, also hesitated when asked about the film’s release date. “If possible,” he said, “I’d like to abstain from answering that question.” After requesting anonymity, he reiterated the status-quo aspect of the Wednesday-opening phenomenon. “I think it’s a pretty self-explanatory thing,” he said. “For whatever reason, it seems to do well, so it’s something that people stick with. To be honest, it’s not something we sit around and talk about.”

This year’s Wednesday releases for Are We Done Yet? and Daddy Day Camp represent a new low, and it would be nice to think that they are mere coincidences. But consider that both Ice Cube and Cuba Gooding Jr. starred in Boyz n the Hood, one of the original impetuses for the Wednesday release, and it gets a little fishy. One of two things is happening here: either unquestioned and outdated models are still being applied to ludicrously nonviolent movies, or there is at work an actual calculated effort to separate black and white audiences.

Johnson, who has worked at theaters for 25 years, puts it down to sheer inertia. “I don’t know if a lot of them even know why they do anything,” he says of studio executives. “You encounter that all the time, where people just keep doing things the same way.”