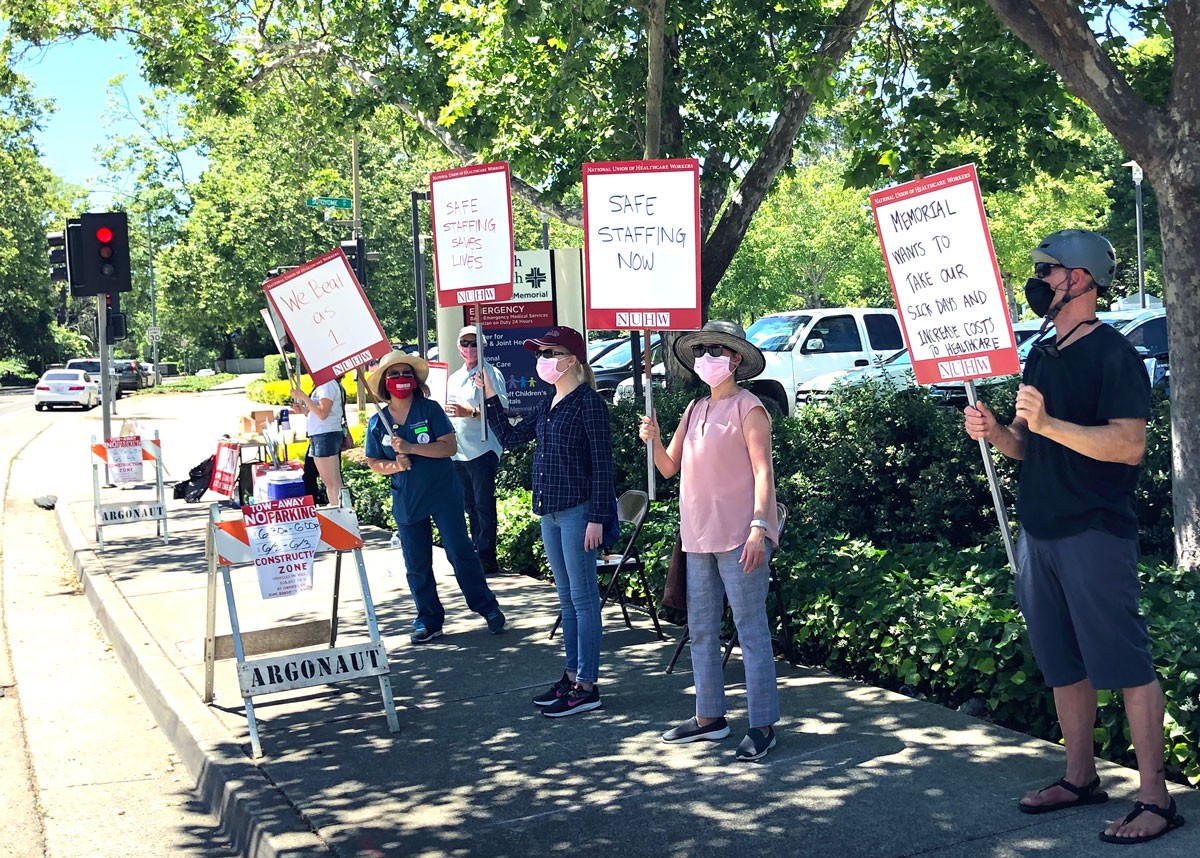 Healthcare workers represented by the National Union of Healthcare Workers (NUHW) gathered in front of Santa Rosa Memorial Hospital on Wednesday to protest a proposed new contract which the union says would result in a two-fold increase in hundreds of workers’ health insurance costs.

In a press release distributed ahead of the four-hour socially-distanced protest, the event’s organizers accused Providence St. Joseph Health, the Santa Rosa hospital’s parent company, of trying to pass costs onto workers while paying for newspaper advertisements praising healthcare workers for their bravery and sacrifices during the Covid-19 pandemic.

The proposed change could increase healthcare premium costs for almost 800 workers from $1,887 to $4,609 per year, among other negative impacts on workers, according to the union.

“We have caregivers who reported for work while their homes burned down in the 2017 wildfires and while their families were being evacuated in the 2019 wildfires because they’re committed to serving our patients,” said Steven Batson, an anesthesia technician, said in the press release. “Now, during this pandemic, hospital management calls us ‘heroes’ and runs paid ads to convince the public that they care about us, but actions speak louder than words. They clearly don’t respect or value us.”

Memorial’s parent company is much larger than one might expect. According to its website, Providence has “51 hospitals, more than 800 clinics and a comprehensive range of health and social services across Alaska, California, Montana, New Mexico, Oregon, Texas and Washington.” St. Joseph Health, the Santa Rosa hospital’s direct parent company with operations in California and Texas, is one of eight chains owned by Providence.

In the past few months, Providence has received at least $509 million in federal Covid-19 stimulus funding, a healthy addition to the company’s $12 billion in cash reserves, the New York Times reported on May 25.


Still, Melissa Tizon, a Providence spokesperson, told the New York Times that the company lost $179 million in April “even with the federal grants.”
“Remember, the pandemic isn’t over,” Tizon added. “We need to be financially stable for the next possible wave.”

For its part, Santa Rosa Memorial Hospital reported $72.8 million in operating profits last year, according to data filed with the state. A hospital spokesperson did not respond to a request for comment on Wednesday afternoon.

Workers on the picket line worried that Providence’s financial stability will come from in the form of pay cuts and reduced benefits for workers.

Mito Gonzales, a lab technician who has worked for Memorial for nearly 25 years through multiple owners, stood on the picket line on Wednesday afternoon.

“We’re tired of all the takeaways,” Gonvales said. “When we bargained our current contract three years ago, we figured there wasn’t much more they could take away.”

The new contract is all the more insulting for workers because of the three emergencies the staff has worked through: first the October 2017 and November 2019 wildfires and now the Covid-19 pandemic.

During the wildfires, Memorial remained open while Kaiser and Sutter closed their doors and evacuated, says Tammera Campbell, a radiological technician who has worked at Memorial for 12 years.

Now, Memorial workers’ hours have been cut by as much as eight hours per week during the pandemic despite the fact that Providence received millions of dollars in aid from the federal government, according to Campbell.

While she acknowledges that Memorial has lost revenue due to the Covid-19 pandemic, she argues that those losses shouldn’t be passed on to workers. Providence could cover Covid-19 costs with the $12 billion it has stashed in savings along with the hundreds of millions the company recently received from the federal government, Campbell says.

“It feels like they are using the pandemic against us,” Gonzales adds.

In an emailed response received yesterday, Christina Harris, a St. Joseph Health spokesperson, said that the New York Times article “does not provide a complete picture of the economic impact the virus has had on our organization.”

Harris cited the need to purchase additional supplies at the same time that elective surgeries, a moneymaker for hospitals, were delayed due to Covid-19 restrictions.

Still, it’s worth noting that all hospitals have faced similar restrictions and workers speaking on the picket line Wednesday said they expected further cutbacks in the new contract whether or not Covid-19 had hit.

In the same email, Frank Beirne, the regional Chief Operating Officer for St.
Joseph Health in Northern California, gave the following statement about the NUHW picket:

“At St. Joseph Health, we want the same thing as our
caregivers represented by unions—contracts that provide competitive pay and
benefits to support caregivers and their families, and allow us to attract and
retain the best talent while remaining good stewards of our resources.

It is important to note that informational picketing is not
a strike and does not impact patient care in any way. We respect the
right of our caregivers to participate in these activities, but we are
disappointed that NUHW at Santa Rosa Memorial Hospital is picketing against our
current contract offer. That contract offer is as good as, and even better
than, contracts that NUHW members ratified at every other St. Joseph Health
ministry in Northern California.”