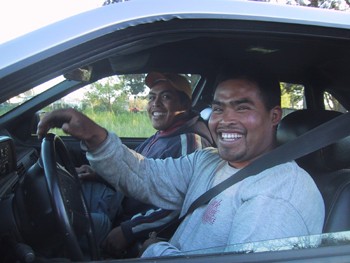 On the Road Again: Brothers Juan and Pilson de la Cruz face two bad choices: drive illegally or don’t work. Like millions of others, they opt to work.

Unlicensed driving is an expensive proposition

It’s no secret that undocumented immigrants are one of the main forces driving California’s economy. This is particularly true in the North Bay, where Mexican nationals and noncitizens from other Latin American countries can be found toiling in vineyards, restaurant kitchens, construction sites, and even in our homes, for wages far lower than the average pay earned by U.S. citizens for similar work.

Ironically, such workers are currently not permitted to have a driver’s license. In car-crazy California, that’s the economic equivalent of a death sentence. Faced with the prospect of getting to work or going back to Mexico, where the wages are far lower, such immigrants have no economic choice but to violate the California Vehicle Code and drive without a license. And that, as brothers Juan and Pilson de la Cruz have discovered, can lead to significant financial problems.

Juan, 28, came to Sonoma County from Mexico in 1998. “I worked with the grapes, I did yard work, I worked as a mechanic,” he explains through an interpreter. After numerous different jobs, he finally landed permanent employment with a local landscape maintenance company, where he’s worked for the past four years.

Unfortunately for Juan, in the years just prior to his arrival in California, the Legislature passed two laws presenting undocumented workers with significant obstacles. The first, enacted in 1993, tied driver’s licenses to Social Security numbers, essentially making it impossible for immigrants without SS cards to legally obtain a license. The second, passed in 1995, increased the penalty for anyone driving without a license or on a suspended license to include a 30-day impoundment of their vehicle.

Although neither of these laws specifically targeted undocumented immigrants, the end result for those who get stopped by police while driving without a license is the automatic impounding of their vehicles. By the time 30 days have expired, fines and towing and storage fees total, on average, some $2,000. That’s often more than the car is worth, and rather than pay the penalty, immigrants don’t retrieve their impounded vehicles. They simply buy another car–usually a clunker worth less than $1,000–and if they are stopped again, they repeat the process. In the seven years Juan has lived in Sonoma County, he’s had eight cars impounded.

It didn’t take Juan long to figure out how the game works. He just buys another car, one with no registration papers at all.

“This is a custom between Mexicans,” he says. “You can get the car cheaper because it has no papers. The other advantage is that since it is not [legally] my car, they can’t charge me for the storage.”

Juan’s brother Pilson, 30, knows firsthand how obeying the law and buying a properly registered car works against undocumented immigrants. He once made such a purchase, then later sold the car to a friend–without transferring the title. When the car was subsequently impounded, Pilson was stuck with the bill, since his name and address were on the registration. When he refused to pay up, the towing company sent it to a collection agency, which added interest to the bill. “I have $4,000 in collections hanging over me,” he says.

Although both men suspect they have sometimes been pulled over for “driving while brown,” they admit that the police usually have a valid reason for stopping them. Generally, it has to do with the nature of the cars they buy– a taillight might be out, or the front license plate might be missing. The latter infraction is what led to the impoundment of Juan’s eighth vehicle in Forestville last month.

He didn’t fret about it too much. Pilson loaned him $1,000, and the next day, Juan bought his ninth car in seven years. Asked what they would do without a car, the brothers’ answers are the same: They would be unable to get to work.

Interestingly, state Sen. Gilbert Cedillo, D-Los Angeles, author of SB 60, the controversial bill that would allow immigrants to obtain driver’s licenses, first became interested in the issue because many of his constituents complained about the exorbitant impoundment fees.

“It’s not like the senator was seeking out a divisive issue to polarize the electorate,” says Cedillo spokesman Edward Headington. In fact, he says Cedillo first tried to get an exception to the impound rule for undocumented workers. That was killed in committee, so Cedillo decided that rather than treat the symptom, he’d go after the cause. The bill was approved by the Legislature but vetoed three times by Gov. Gray Davis, who only relented and approved the measure after it became clear he was badly trailing in polls during the recall election in 2003. Davis had hoped to energize the Latino electorate. Instead, Arnold Schwarzenegger used the issue to help end Davis’ political career.

Last year, after convincing the Legislature to repeal SB 60 by promising to approve the measure if security and background checks were amended to it, Schwarzenegger reneged, and vetoed the bill, recast as AB 2895. Cedillo reintroduced SB 60 in January, and it will be debated upon later this year.

Meanwhile, the de la Cruz brothers–and an estimated 2 million other immigrants–still have to get to work. So they continue to drive without licenses. Despite the financial pitfalls such illegality presents, they have no intention on returning to Mexico, where instead of $10 an hour they earn $10 a day.

“Here, I can go to the store, and if I want a sandwich or a hamburger, I can buy it, because I have the money,” says Juan.

“I can buy a car, and if the police take it, I can buy another one.”