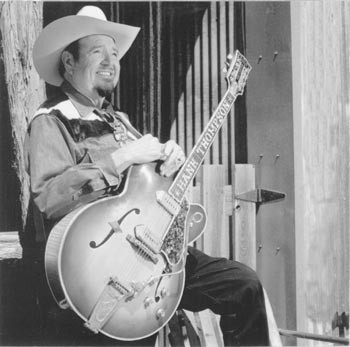 Tunes For a Hot Summer

Cowpie-kickin’ tunes for a hot summer

TEXAS SINGER, songwriter, and guitarist Joe Ely’s brash self-will and decidedly regional sound locked him out of the Nashville mainstream long before “alt-country” became a commercial option. His late-’70s albums, such as Honky Tonk Masquerade, were the strongest country-rock works since the 1973 death of musical pioneer Gram Parsons, as Ely wrapped Tex-Mex, folk, flamenco, honky-tonk, and hard-blues boogie around his muscular and exuberant voice, braying stellar songs by fellow Texas outlaws (and former fellow Flatlanders) Jimmie Dale Gilmore and Butch Hancock. Besides those early classics, the new Live at Antone’s serves as a fine introduction to Ely. It’s more sprawling and less reckless than 1981’s Live Shots (recorded when Ely opened a British tour for the Clash), and it’s proof of Ely’s tremendous and natural concert prowess. From the opening epic, “The Road Goes on Forever,” to the closing rave-up, “Oh Boy!” his originals and covers are spiced with tastefully dueling guitar and pedal steel leads, images of dusty drifters and sweaty roadhouses, and the cheers of hardcore fans who at one point yell out, “We love you, Joe!” Karl Byrn

TELECASTER master Jim Weider is a highly sought-after session player who has performed with Levon Helms and the All Stars, Johnny Paycheck, and the Band (filling Robbie Robertson’s shoes after his departure). Of late, Weider has contributed his fat Fender sound and production skills to tribute albums celebrating Bob Dylan, Elvis Presley guitarist Scotty Moore, and Doc Pomus. Big Foot–featuring guest appearances by Rick Danko and Garth Hudson of the Band, and bassist Tony Levin–runs the gamut from a snarling cover of Jimi Hendrix’s “Little Miss Lover” to a sassy Texas shuffle to his own hard-bitten but melodic blues. Does this guy have an axe to grind? Bet on it! Greg Cahill

SOMEONE’S gonna have to work damn hard to top this western swing legend this year. Hank Thompson is a true musical pioneer: the first country artist to record a live album; the first to garner corporate sponsorship; the first to record a stereo album; the first to perform on a TV variety show; and the first artist of any ilk to travel with his own state-of-the-art sound and lighting systems. But those would be but footnotes in musical history if Thompson weren’t the purveyor of a western swing sound as smooth as the silk sheets in a Reno cathouse. His last album paired this country pioneer with Vince Gill, George Jones, Garth Brooks, Lyle Lovett, and other country greats. This disc (slated for a July 18 release) is 100 percent unadulterated Hank–a honky-tonk titan dishing up a tasty backyard barbecue of rollicking blues boogies and red-hot Tex-Mex polka beats with equal aplomb. Most satisfying. G.C.