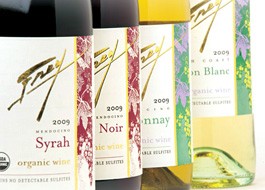 'Organic' standards for wine not what they seem

The integrity of the organic industry is at stake here,” says Butte County winemaker Phil LaRocca. “How can you call something organic and then add a synthetic to it?”

Yet a petition making its way to the National Organic Standards Board would do just that, and supporters insist that it’s fair labeling. Mendocino County winemaker Paul Dolan, for example, farms and utilizes organic grapes. So does the Barra family of Mendocino, and the Benziger family in Glen Ellen.

But a clause deep within the National Organic Program’s pages of legal jargon prohibits these and hundreds of other winemakers around the world from labeling their bottles “USDA Organic.” This prohibition leaves the privilege solely to about a dozen winemakers in the world who not only use organic grapes to make their wines but who also add no sulfites, or sulfur dioxide, before bottling. As supporters are quick to point out, sulfites are a common preservative that have been used by most winemakers in the world since the 15th century.

Dolan and others say that the National Organic Program’s law itself is illegal, directly contradicting the Federal Organic Foods Production Act of 1990, which states clearly that sulfites may be added to organic wines. To clear the conflict, and to make space for their wines in the coveted USDA Organic category, three parties—Paul Dolan Vineyards, Barra of Mendocino and Organic Vintners Inc., a Boulder, Colo., distributor of organic wines—submitted a petition on April 1 to the National Organic Standards Board requesting a modification to the law.

Currently, the National Organic Program states that organic wines containing up to 100 parts per million of added sulfites may only be labeled as “made with organic grapes” or “made with organically grown grapes” instead of “USDA Organic” when sold within the United States.

Shawn Harmon, sales manager at Barra of Mendocino, feels that the “made with” category is perceived by consumers as a lesser denomination, and he, along with Dolan and others, wants the right to use the USDA Organic seal. “Our wines are organic, identical to [Frey Vineyards’], except that they contain a small amount of sulfites, which the Organic Foods Production Act allows,” Harmon says.

Ukiah winemaker Paul Frey, who, like LaRocca, produces wine containing only organic grapes and no added sulfites, firmly opposes the petition. Frey Vineyards is one of the oldest and largest makers of USDA Organic wines in the world, and Frey fears a crumbling of the current laws.

“I believe that any organic standards should be strengthened over time, never weakened,” Frey urges, adding that to permit the addition of sulfites in wines labeled USDA Organic “would definitely be weakening the system.”

But the petition does not ask to introduce a new and previously prohibited chemical to winemaking, claim its authors. The Federal Organic Foods Production Act, in Section 6510.3, already allows sulfites to be used in organic wine, Harmon points out, and he says that only by the contradiction introduced by the National Organic Program have he and hundreds of others been cordoned into the “made with” category.

“That’s in direct conflict with the Act,” Harmon said.

Paolo Bonetti, president of Organic Vintners Inc., deals exclusively in organically farmed wines. Bonetti says many of his foreign-made bottles can legally be called “organic” in their respective nations of origin but must unfairly wear a special “made with” label when sold in the United States. Like Harmon, Bonetti stresses that their petition to the government does not attempt to weaken the existing laws of organic winemaking.

“We just want to change the [National Organic Program’s] annotation so that organic wines with added sulfites can be called ‘organic’ and not have to be called ‘made with organic grapes,'” Bonetti says.

Though the Food and Drug Administration says sulfites are “generally recognized as safe” for consumption, the World Health Organization calls sulfur dioxide an “allergen,” and many consumers believe themselves to be allergic to the preservative. Steve Frankel, a Ukiah wine distributor, says he has indeed seen a rise in demand for wines with minimal or no sulfites.

“For these people, to walk into a natural foods store and see that USDA logo gives them the feeling that they’re buying a pure product,” explains Frankel, who owns Organic Vintages and distributes USDA Organic wines to New York, New Jersey and Connecticut. “It wouldn’t be fair to call all these wines [with added sulfites] across the board ‘organic.'”

Frankel thinks consumers would feel “misled,” but Harmon doesn’t. He, like Dolan, says he’s not looking to pass off his wines as sulfite-free, and that a note on each bottle of his family’s wines advising consumers of sulfites would provide adequate warning of the additive.

“Consumers aren’t stupid,” Harmon says. “If they’re wine drinkers and they think they’re allergic to sulfites, they’ll read the back of the bottle and look for the sulfite-free wines.”

The organic wine market is a struggling industry, and Dolan wants to see it grow. To increase the availability of USDA Organic wines through a simple change of current laws could increase consumer interest, Dolan says; demand for organic grapes would increase, and the environment could benefit.

The National Organic Standards Board is currently reviewing the bid to edit the organic-wine labeling laws, and the decision to change or uphold the existing law is scheduled to occur sometime before 2013.