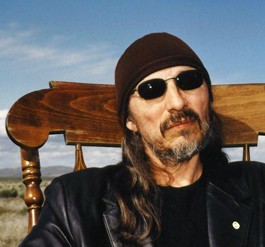 Former activist John Trudell rocks his pain and his poetry

John Trudell is a warm, relaxed man who punctuates every other sentence with a carefree chuckle. Surprisingly, the former chairman of the American Indian Movement appears the antithesis of the image of the stoic, stone-faced protester. “I don’t let little things piss me off like they used to,” says the poet, who performs Oct. 26 in Mill Valley. “The rage is not there anymore . . . or it’s resting.”

Trudell’s serenity is hard to believe after hearing his latest release Madness & the Moremes, in which he explores the state of our decaying union and his own dark internal complexities he dubs “moremes.” With his understated yet formidable voice buoyed by his rootsy band, Bad Dog, and the Native American chanting of vocalist Quiltman, Trudell’s music is a potent blend that echoes acts as diverse as Los Lobos and Lou Reed. Eerily prophetic is “God Help and Breed You All,” written in the ’80s with late guitarist Jesse Ed Davis. “Profits pissing lives into the Wall Street urinal,” Trudell expounds, “which I don’t want to read, but someday I’m going to read.”

While this sprawling double album is riveting, Trudell’s road to sagely, rocking wordsmith was extremely trying. Born to a Santee Sioux father and Mexican mother, he grew up near the Santee reservation in Omaha, Neb., an impoverished place with little potential. “I was headed to jail and I knew it,” the 62-year-old recalls with a laugh. “There was no work, no nothing, so I left to escape that.”

In 1963, he joined the Navy, soon serving in Vietnam. When hearing “How Does Tomorrow Dream,” with its heartbreaking refrain “They’re killing the children in [a catalogue of regions from Afghanistan to the Congo],” one may think Trudell regrets his service. He doesn’t. “In the military, your job is to be aggressive and do what you’re told, but so does a CEO in one of these corrupt corporate institutions,” he says. “The real issue isn’t with the military itself, but with the people who set the military in motion.”

In 1969, Trudell joined the Native American occupation of Alcatraz Island, a landmark moment for awareness and support for the movement. Throughout the ’70s, he earned the ire of the FBI, who reportedly had a file on him that exceeded 17,000 pages. Then the unspeakable happened.

Shortly after midnight on Feb. 11, 1979, mere hours after Trudell burned an American flag in front of FBI headquarters in Washington, an arson attack engulfed his home on Nevada’s Duck Valley Reservation. His mother-in-law, his three young children and his wife, pregnant with their fourth child, all died in the fire. Reportedly without investigating the fire, the U.S. government ruled it a result of an electrical short on the back porch, something Trudell maintains is an impossibility.

After driving hundreds of thousands of miles, drifting aimlessly for five years, Trudell was struck by a message. “It was during this time that these lines came to me,” he remembers. “Something told me to write them down. I think the whole purpose of having received them is a way of letting things out.” His friend Jackson Browne took him in and exposed him to the recording studio. It all felt right to Trudell. “I consider Jackson an ally and a brother,” he says. “He was very instrumental in my survival.” Soon he released AKA Grafitti Man with Davis, which Bob Dylan called the best album of 1986. “I never had any idea that I’d be doing what I do today,” he says, still amazed at his journey from activist to artist.

While still raising consciousness through his art, Trudell now advocates for a much bigger group of people: all of us. “I came to understand that part of the problem is that we don’t identify—individually, collectively or generationally—as human beings anymore,” he laments. “Beneath race, class, gender, all the divisive stuff, once you cut through all of that, we’re all human beings.”While on the subject of camaraderie, I ask Trudell about companionship since the time he lost his family. But some words are for him alone.

“Yeah—the moremes!” he replies with a laugh. “They’ve been with me through everything.”