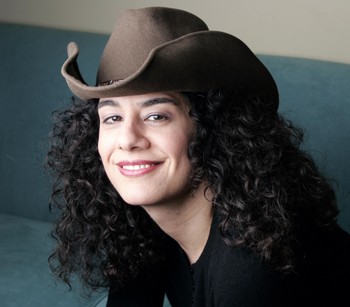 Girl Next Door: Author Alicia Erian’s debut novel travels in a dark neighborhood of the soul.

Love, sex, abuse–growing up a ‘Towelhead’

Somewhere around page 75 of Alicia Erian’s first novel, Towelhead, it hits you: this book has a lot of sex. But not the good kind of sex. Erian isn’t your average peddler of Nerve.com-style erotica or the kind of intellectual smut ladled out by Nicholson Baker. She pens stark, wildly inappropriate scenes between grown men and a 13-year-old protagonist that are somehow both criminal and tender. But literary sex purists should fear not–there’s plenty of good old-fashioned fornication between consenting eighth graders.

This is a weird way to proclaim that Towelhead (Simon & Schuster; $22) is a fascinating novel that flows like butter and disrupts your stomach like the Country Kitchen Buffet. Erian, who appears May 17 at Readers’ Books, takes the line between transgressive affection, consensual sensuality and raw pedophilia, and shakes it like a damn Etch-a-Sketch.

Set during the first Gulf War, Towelhead tells the story of 13-year-old Jasira, whose curse is to be both prematurely “developed” and the offspring of two profoundly idiotic parents. The novel beings with Jasira as she moves from her Irish-American mother’s home in Syracuse to her Lebanese father’s house in Houston under less than ideal circumstances. As she explains, “My mother’s boyfriend got a crush on me so she sent me to live with Daddy.”

Living with Daddy is about as fun as any abstinence-only prison camp. That’s because, despite his good intentions, Daddy’s parenting style is one of slap first, explain later. A forty-something NASA engineer, he grows obsessed with CNN’s Desert Storm coverage, as it lets him fulminate at Saddam (whom he hates for being a tyrant) and CNN (which he hates for not understanding “the Arab perspective,” which, wouldn’t ya know, is the same as his own).

So Jasira goes to school, takes a job babysitting the boy next door and exists in a state of bored emotional starvation. When her mother calls, she’s often less interested in Jasira than in using her daughter to get back at her ex-husband. Erian has a wonderfully subtle way of crafting believable scenarios in which life just rains stones. For as her mom fluctuates between being manipulative and being absent, Daddy dearest is straight-up cruel. He says he can’t bring home his girlfriend because Jasira is always “hogging all the attention”–that’s when he’s not hitting her when she least expects it or forbidding her to date a suitor because he’s black and that will give people the wrong idea.

There’s a story here, not merely an artifice for impressive prose. Jasira’s episodes of self-reflection are frequent but not ponderous. Mostly they concern the duality imposed by her parents. Of her father she says, “I could never imagine loving him, or even liking him very much. It was something different from all of that. What I had learned about Daddy was that it was very hard for him to be nice, so when he was, it would’ve been wrong not to try to appreciate it.”

Of course, Jasira’s maturity is fleeting and combined with a frustrating passivity. She wants to be liked and often surrenders all better judgment to please the wrong people in the wrong way. I suppose this makes her a normal teenager. But it also leaves her intensely vulnerable to perverts, like the army reservist neighbor next door. She’s not ready for his advances, but she’s desperate for his attention.

In Jasira, Erian has created a character with her own perverted emotional calculus that, however flawed from our safe adult perspective, seems viable for one so vulnerable. Towelhead‘s humor is dark and subtle, almost British. Perhaps that’s why Alan Ball, creator of Six Feet Under and screenwriter of American Beauty, has optioned it for his directorial debut. It certainly stands a chance of being a great film, as its dialogue-laden pages can translate verbatim. That said, it’ll require great performances by kid actors, so who knows.

Some may confuse Arian’s feel-good, if not happy, ending with the preachiness of an after-school special, a narrative compendium of Our Bodies Ourselves. But there’s nothing preachy in the tone or the subtext, except maybe the idea that children need attention more than sex, and love above all else.