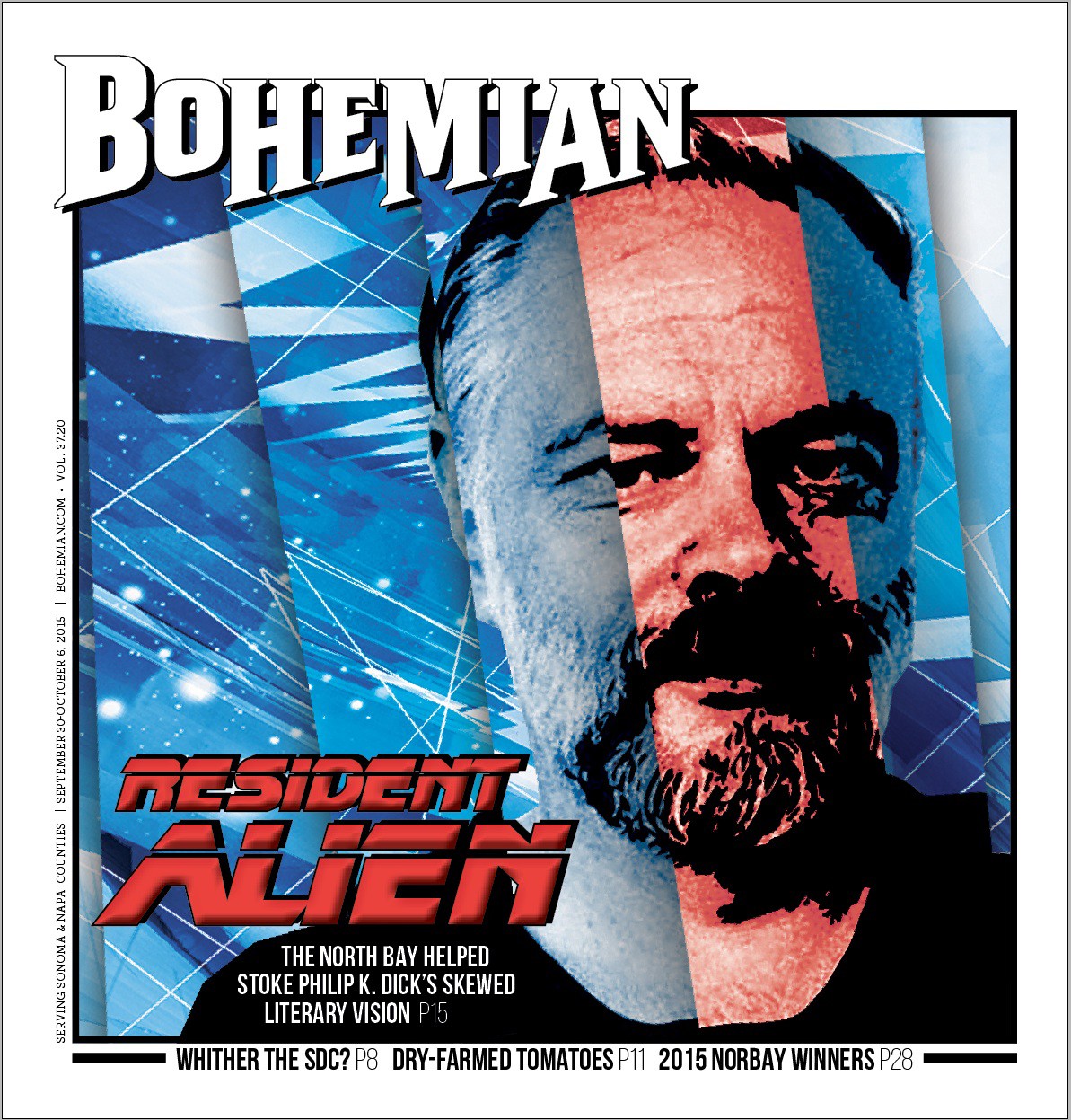 Philip K. Dick is the van Gogh of science fiction writers, striding the hazy line between genius and insanity. PKD, as his fans call him, never lived to
see his writing transformed into such blockbuster films as Blade Runner, Total Recall, Minority Report,
The Adjustment Bureau and A Scanner Darkly. North Bay fans of his stories should know that he lived in the area, and his time here shows up in his work.

When Dick died in 1982 at age 53, his New York Times obituary described him as a “prolific, sometimes visionary science-fiction writer, whose multilayered stories probed the discrepancies between illusion and reality.” While bureaucratic absurdities are Kafkaesque and governmental overreach is Orwellian, in the world Dick created, reality itself conspires against you.

Dick never lived to see the amazing and lasting legacy his labors gave birth to, but it’s intriguing to follow his path through the North Bay to see how it influenced his skewed literary visions. Philip K. Dick was born in Chicago and grew up in Berkeley. He began visiting Sonoma County as a child and lived in Sonoma at 550 Chase St. with Joan Simpson in the summer of 1977.

A character with Simpson’s name appears in Dick’s short story “The Day Mr. Computer Fell Out of Its Tree.” The two were introduced by Dick’s childhood friend Ray Nelson, who co-authored The Ganymede Takeover with him. Nelson also wrote the short story “Eight O’clock in the Morning,” which was the basis for the cult sci-fi film They Live.

Anthony Peake wrote in A Life of Philip K. Dick: The Man Who Remembered the Future that Dick attended the Cazadero Music Camp when he was 11. While there, he nearly drowned in the Russian River, and developed a lifelong fear of water.

During the late 1950s and early 1960s, Dick lived in Point Reyes Station with his third wife, Anne. It was there that he wrote The Man in the High Castle, his Hugo Award–winning masterpiece recently adapted into a TV series by Amazon Studios.

In a 2010 New York Times article on Dick’s time in West Marin, the writer Jonathan Lethem said in an interview it was Dick’s most productive time. Lethem included five novels from Dick’s time in Point Reyes Station in the Library of America anthologies that he edited.

“The river of his literary ambitions—his interest in ‘respectable’ literature—joins the river of his guilty, disreputable, explosively imaginative pulp writing,” Lethem told the Times. “It’s the most important passage of his career—more masterpieces in a shorter period of time.”

Anne Dick says in an email that Dick was a fan of Jack London. He visited Jack London State Park in Glen Ellen, and had read his works. London’s 1908 dystopian novel, The Iron Heel, inspired 1984, according to Orwell biographer Michael Shelden, and probably struck a chord with Dick.

Sonoma County features in several of his short stories. “Exhibit Piece” mentions a camping trip to the Russian River, and a character in The Man Whose Teeth Were All Exactly Alike lived in Fountain Grove, now part of Santa Rosa. In “What’ll We Do with Ragland Park?” a character owns Sonoma Valley vineyards.

Dick even mentions Luther Burbank, the plant (and marketing) wizard of Santa Rosa, in the short story “A Terran Odyssey”:

Scratching his nose, Hardy murmured, “What did you have in mind?”

“Maybe I could find a mutant potato that would feed everybody in the world.”

“I mean a type of potato. Maybe I could become a plant breeder, like Luther Burbank. There must be millions of freak plants growing around out in the country, like there’s all these freak animals and funny people here in the city.”

Hardy said, “Maybe you could locate an intelligent bean.”

“I’m not joking about this,” Stuart said quietly.

The story later became the 1965 book Dr. Bloodmoney, a post-apocalyptic novel that features a self-governing community in West Marin menaced by Hoppy Harrington, a Thalidomide baby missing all of his limbs who gets around with servo-powered prosthetics and aggressive powers of psychokinesis.

The town of Sonoma is headquarters for the Rhipodian Society in Dick’s semi-autobiographical novel VALIS (“Vast Active Living Intelligence System”).

VALIS is based on a series of mystical visions that Dick had between February and March 1974 while living in Santa Ana, which he called the “2-3-74” or “Pink Light” experience. Robert Crumb, of Zap Comix fame, illustrated a version of the event that he titled “The Religious Experience of Philip K. Dick” in Weirdo issue 17. Dick continued writing about this experience for the rest of his life, trying to interpret and explain it to himself. His voluminous notes were stored in a home in Glen Ellen and published posthumously as his 944-page Exegesis.

The Pink Light experience begins with Dick in great pain after having his wisdom teeth removed. When the pharmacy delivered his medication, he opened the door and light reflected off the young delivery woman’s fish medallion. Mesmerized, he asked what it was, and she explained it was a symbol of the early Christians.

Dick said he then entered a time-slip and felt himself co-existing in ancient Rome just after the crucifixion. Another personality from that era took him over for about a year. In his shorthand notes, he called our world the Black Iron Prison and wrote repeatedly, “The [Roman] Empire never ended.”

Later, he said a pink light flashed in his eyes and beamed information into his brain, telling him his son had a congenital hernia and needed immediate surgery. Dick was right. After taking his son to the hospital, he was told by a doctor that his child could have died at any time.

Information kept flooding into Dick’s brain, which he thought came from an ancient alien satellite orbiting our planet. The Pink Light experience formed the basis of VALIS and The Divine Invasion, and the film Radio Free Albemuth directed by John Alan Simon.

In 1978, Dick attended the Octocon II convention in Santa Rosa. The guest of honor was Dune author Frank Herbert, who wrote and took photos for the Press Democrat from 1949 to 1953. While it is unclear whether Dick connected with Herbert at that convention, he definitely met Robert Anton Wilson, author of The Illuminatus! Trilogy.

Wilson had had his own mystical experience, which he thought came from the star Sirius, around the same time as Dick had his visions. The two discussed their common experiences at the Octocon convention.

In his foreword to the first book in the Cosmic Trigger trilogy, Wilson describes their conversation: “My impression was that he was worried his experience was a temporary insanity, and was trying to figure out if I was nutty, too. . . . The parallels to my own experience are numerous, but so are the differences. If the same source was beaming ideas to both Phil and me, the messages got our individual flavors mixed into them as we decoded the signals.” One of Dick’s characters in VALIS even mentions having read Cosmic Trigger.

The world that Dick knew has slowly transformed into a Phildickian story. Paranoid PKD never imagined the voluntary popularity of data mines like Facebook. Smartphones spying on their owners is predictably Orwellian; the twist is now they are must-have status symbols.

Dick would probably be pleasantly surprised to see solar-powered homes sprouting like mushrooms across the county, but the near-monopolistic Pacific Gas & Electric’s effort to cut compensation for residential solar power generators and increase fees for solar customers has a faintly Phildickian feel.

Maybe he wasn’t so paranoid after all.

Next ArticleOct. 7: Political Puppets in Sebastopol