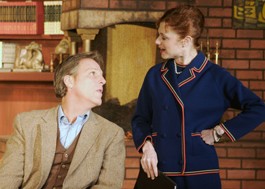 As the calendar rapidly runs out of pages, cultural critics across the country are taking part in the odd annual cultural observance known as the Top 10 list. From coast to coast and border to border, those of us who are privileged to be public witnesses and explorers in the abundant realms of cinema, music, fine arts and theater—and to report our findings in the form of regular reviews—see the month of December as an opportunity to look back on the ending year and, with the cool hindsight and trained observation of our craft, pick the 10 concerts, movies, records, exhibits or plays that most fully floated our boats, knocked off our socks and blew our brains.

As the Bohemian’s dutiful theater reviewer, and a member of the Bay Area Theater Critic’s Circle, I have seen close to 70 shows over the last 12 months, each ticket stub ritually stuffed away in the same cigar box I’ve been using for years. With the New Year fast approaching, I have painstakingly sorted the stubs according to my personal preference, employing this yearly ritual to relive the joys, thrill, tears—and occasional deep disappointments—of the entire spate of shows I have attended, notebook in hand.

Sadly, with so much theater offered by so many companies in the North Bay, I have not been able to see everything that has trod the myriad stages of the region. There are a number of much-discussed shows that cannot be part of my favorites list, since I was unable to experience them: February’s now-legendary Shirley Valentine, starring Mary Gannon-Graham, at the Sonoma County Repertory Theater; Brett Lindsay’s innovative Hamlet: Ghost Machine presented by the Imaginists; and the Pacific Alliance Stage Company’s luminously reviewed production of Tennessee Williams’ Glass Menagerie.

I grieve every great show I missed as deeply as I regret the ones I did see that turned out to be brain-deadening wastes of time. Of the shows I did attend, many are worthy of inclusion on somebody’s Top 10 list but failed to make mine for the simple reason that something else moved me more deeply or surprised me more completely. As a person who prefers to be inspired and delighted rather than shocked and appalled, I tend to favor the shows that present an optimistic, though honest, view of our species. These, then, offered with humility, are the plays on which I look back most fondly. They’re not necessarily the best, but they are definitely my favorites: my Top 10 torn tickets of 2008.

1. ‘The Cocktail Hour’ A. R. Gurney’s ingenious comedy-drama about an on-the-wagon playwright visiting his New York family during their nightly ritual of pre-dinner self-medication, The Cocktail Hour is nearly impossible to stage properly and has thus thwarted legions of community and professional troupes. One amazing thing about my favorite show of the year is that it was produced last January, by Marin County’s oldest community theater company, the Ross Valley Players. The second amazing thing is, well, pretty much everything else about the production.

Compassionately directed by Mary Ann Rodgers, the playfully perfect cast—Eric Burke (charmingly wounded as the writer wrestling with his family’s demons), T. Louis Weltz as the dad, Beth Deitchman as the sister and Christine Macomber as the increasingly tipsy mom—hit all the right notes, tickling funny-bones and breaking hearts, often in the very same breath. I knew when I saw it that this would be the play to beat all year, and while my No. 2 pick came within an Irishman’s whisker of doing that, RVP’s The Cocktail Hour remains my most treasured and memorable theatrical experience of the year.

2. ‘The Seafarer’ Connor McPherson’s Faustian holiday fable The Seafarer, which just ended a held-over run at Mill Valley’s Marin Theater Company, is similar to The Cocktail Hour in that it deals with a man returning home with a desire to stay sober, while all around him, the people he knows and loves are getting plastered. What is different is the setting, a small coastal town in Ireland, and the fact that when Sharky (Andy Murray) wrestles with his demons, they appear in the form of the Big Demon himself, Lucifer, aka Mr. Lockhart (a superb Robert Sicular). Masterfully directed by Jasson Minadakis, this Christmas Eve card game for the possession of Sharky’s soul was both hilarious and fundamentally heart-stirring.

3. ‘Boston Marriage’ Another cordially caustic show that opened early in the year and made a lasting impression was Sixth Street Playhouse’s wickedly screwball production of David Mamet’s Boston Marriage, cleverly directed by Sheri Lee Miller. (This is a strong year for Miller; see below.) Featuring Danielle Cain and Bronwen Shears as longtime lovers trying to make ends meet in turn-of-the-century Boston, with Anna Tess Coughlin as Anna’s wise but not-too-bright Scottish maid, this was both a send-up of social mores and (ultimately) a believable love story, its lesbian-powered homage to the parlor comedies of Oscar Wilde joyously, jubilantly entertaining.

4. ‘Transformations’ Conrad Susa’s experimental 1960s opera Transformations, adapted from the book of the same name by Pulitzer Prize&–winning poet Anne Sexton, is almost never performed, so Cinnabar’s fall production of the show, based on Sexton’s personal reimagining of several Grimm’s fairy tales, was welcome, if only for the opportunity to catch a glimpse of this dark, psychologically challenging work. In the hands of director Elly Lichenstein and musical director Nina Shuman, this fantasia on themes of madness, abuse, murder and cannibalism was not just an interesting museum piece, it was riveting and unpredictable, truly transformative theater.

5. ‘On the Road’ Based on Jack Kerouac’s counterculture epic, On the Road was one of the biggest surprises of the year, featuring a trio of powerhouse performances. Ryan Schmidt played Kerouac stand-in Sal Paradise, Miyaka Cochrane was the Ginsberg-esque holy man Carlo Marx, and the usually sedate Ben Stowe turned in an expectation-shattering, stage-burning explosion as the hedonistic beatnik wildman Dean Moriarty. Directed for the Sebastopol Shakespeare Festival’s outdoor stage by Sonoma County Rep’s Scott Phillips, this fun, frisky, poetry-packed show was, to borrow words from Carlo Marx, “Crazy, cock-eyed and extremely strange.”

6. ‘True West’ Actor Eric Burke (who appeared in four of the shows mentioned on this list, including Cocktail Hour, On the Road and Death of a Salesman, below), formed Double E Productions with fellow thespian Ed McCloud just so they could appear together in a production of Sam Shepard’s True West. With director David Lear at the helm, the self-financed effort played three weeks at Spreckels Center for the Arts, playing to small but stunned audiences who knew they were watching one of the finest demonstrations of no-holds-barred acting in the North Bay. There are rumors afoot that this show will be reprised with the same cast and director at a local theater in 2009. May those rumors be true!

7. ‘Death of a Salesman’ Sixth Street Playhouse lured Los Angeles actor Daniel Benzali to Santa Rosa to play the lead role in Arthur Miller’s bleak drama about a deteriorating salesman in the 1950s. What was so amazing about the production, directed by Sheri Lee Miller (of Boston Marriage), was not that Benzali was so good, but that the rest of the cast, a who’s-who of North Bay actors, some professional, some not, were every bit as riveting.

8. ‘Private Lives’ Director Carol Mayo Jenkins’ production of Noel Coward’s enduring comedy-drama about marital instability had a cast that appeared to have transported from the 1930s. Funny, smart and oh-so-classy, this was Cinnabar’s other great show of 2008.

9. ‘Taming of the Shrew’ A piratical staging of Shakespeare’s battle of the sexes, with Mary Gannon-Graham as the strong-willed Kate and Dodds Delzell as the overconfident Petruchio, this swashbuckling show was not just a record-shattering achievement for the Sonoma County Rep and the Sebastopol Shakespeare Festival, it was a brilliant idea, brilliantly executed.

10. ‘Always Patsy Cline’ Boldly structured as a cross between a one-woman-show and a high-spirited musical review, this year-ending love-bomb from Sixth Street Playhouse (what, them again?) was another unexpected box-office blockbuster, and another triumph for actress Mary Gannon-Graham, who played legendary country singer Patsy Cline almost entirely by singing her way through Cline’s most famous songs. Grounding the proceedings, Liz Jahren played Cline’s “biggest fan,” the Houston-based single mom Louise Seger, as a larger-than-life force of nature. The friendship between this soulful Texan and the soul-sick singer was palpably real, a testament to the power of exceptional acting.

With that, I empty my cigar box, and prepare for another year of theater in the North Bay and beyond. If 2009 is anything like 2008, I may have a hard time finding a seat.