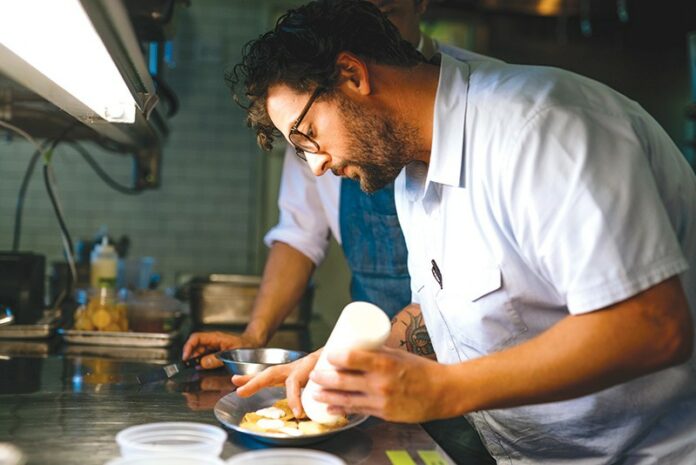 The Michelin Guide handed out or kept in place stars for top restaurants like the French Laundry and Meadowood last month. Napa’s Ninebark wasn’t on the list because it’s too new, but I expect chef Matthew Lightner hopes to pull down a pentagram or two for the three-week-old restaurant after Michelin inspectors come calling next year.

Lightner already earned two stars for his work at Atera in New York City. He first came to national attention at Castagna in Portland, Ore. Now he’s teamed up with fine-dining heavyweights AvroKO at Ninebark.

Ninebark is located in a three-story building on Main Street that’s infamous for a 1974 murder that went unsolved for nearly four decades. The former establishment, Fagiani’s Cocktail Lounge, had been closed since the crime until Ninebark opened. Each level of the new restaurant has a different identity: rooftop lounge, bar and restaurant.

Lightner is fond of grilling with a creative use of smoke and dried ingredients. Look for an a la carte menu and dishes like charcoal-roasted duck, poached and grilled halibut, fresh and dried nasturtium in a broth of stewed vegetables, and skewered trout cooked over cedar branches.