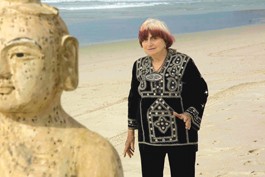 Agnès Varda explores her own craft in 'Beaches'

Agnès Varda opens her documentary The Beaches of Agnès with the comment, “I’m playing the role of a little old lady.” This is Varda’s essay on herself, as a filmmaker startled to discover that she’s about to be 80 years old. What holds the film together is the theme of the waters’ edges; at beaches, riversides, canals or stone quays, she voyages out and returns home.

In one instance (Varda describes it as “a flop,” because she can’t feel what she thought she would feel), the director revisits a childhood home in Brussels and walks along the rim of a dried-up pond in the backyard.

By contrast, her favorite place growing up is Sete, on the Mediterranean. Varda and her family lived on a boat in the canals there. We see a dreamy Medieval landscape, a place with its own language. But Sete is also a poor fishers’ city, and Varda’s first film was shot there, 1954’s La Pointe Courte, a neorealist effort with shifting perspectives, influenced by Faulkner’s Wild Palms.

Varda films herself piloting a flat-bottomed boat with an Arabian sail up to the Rhone to Avignon, and down the Seine. She visits old friends at Venice Beach in Los Angeles. She recreates her old place at the Rue Daguerre. Fancy being a photographer, living and working on the street named after the inventor of the camera!

Every glimpse of Varda’s work makes you want to see more. Here are excerpts from Cleo from 5 to 7, recently released on Criterion, and the documentary Daguerreotypes about her neighbors on the Rue Daguerre. Varda explains that she could only shoot that documentary in a 300-meter radius around her front door because no one wanted to pay for the electricity, so she ran the lights off an extension cord protruding from the mail slot on her gate.

But the point is that Varda isn’t just reviving her old movies like a guest on a chat show. She has a wider gaze than that. I can’t recall a film so honest about the pleasures and pitfalls of filmmaking.

It seems that what drew Varda to the movie camera was a democratic eye and a do-it-yourself mentality. This French New Wave veteran was always good at spotting talent, whether it was the young Gérard Depardieu (seen in Varda’s quay-side short titled Nausicaa), the lovely and severe Jane Birkin, Philipe Noiret or the young Harrison Ford.

If there’d been a spot of pretense or great-ladyisms, The Beaches of Agnès would be unwatchable. Varda is not afraid to look fond or ridiculous. In honor of the heart-shaped-potato sequence in her brilliant The Gleaners and I, she dresses in a potato costume as part of a multimedia piece on the spud. Varda loves flea markets, and her instincts as a recycler make her take the print of one of her failed films—a forgotten film “with beautiful actors”—and construct it into a sheltering structure in a park.

In Beaches, Varda includes the part that death plays in her life. At a photo exhibit, honoring her friend Jean Vilar, the creator of the Avignon Festival, she points to the lost friends in the photos. It prepares us, finally, for the tombstone reading “Ici Repose Jacques Demy.” “The most cherished of the dead,” Varda says of her husband, the director of one of the most popular French imports of the 1960s, The Umbrellas of Cherbourg.

Varda made another movie commemorating the 100th anniversary of cinema. She personified cinema as a grand-mannered aristocrat of many names and a fading memory. From the vantage of The Beaches of Agnès, a better embodiment of cinema would be an old lady: frank, kind, fearless and full of charming and fascinating stories, one who’d been with us at childhood and one who would somehow be there all the way to the end.