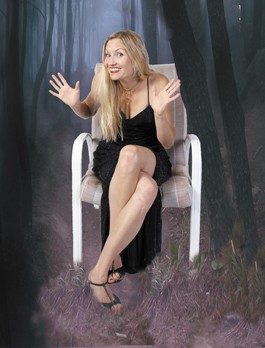 Opera is an art form of deep emotion and grand exhibitionism, but it need not be massively staged to be effective and entertaining. In fact, beginning in the late 1950s and ’60s, there was a movement to create small, offbeat, experimental operas that eschewed the pageantry and excess of the opera hall, replacing it with a scaled-down variation that emphasized psychological insight, minimalist sets and complex, dissonant music.

One of the more interesting experiments of this period is Conrad Susa’s Transformations, adapted from the book of the same name by the Pulitzer Prize–winning poet Anne Sexton, itself a poetic reinterpretation of several famous fairy tales collected by the Brothers Grimm. In the smart, gorgeously sung production that opened last weekend, Cinnabar re-embraces its own experimental roots and delivers a Transformations that is as entertaining and satisfying as it is musically challenging and mesmerizingly, thrillingly strange.

In the book, Sexton—whose childhood abuse and years of alcoholism, institutionalization and attempted suicide are woven into the heart of her work and reputation—writes elaborately abstract, wildly anachronistic visitations on the sometimes disturbing deeper themes of Rapunzel, Snow White, Rumpelstiltskin, Hansel and Gretel and others, superimposing onto them her own therapeutic explorations, thoughts, ideas, assumptions and reactions to the horrors of her life. In book form, it’s a gloriously shocking and beautiful journey into a thoroughly humane madness; in its operatic form—and opera is the perfect medium for exploring madness—these musings are pushed into the realm of genius.

Inventively directed by Elly Lichenstein, with strong musical direction by Nina Shuman, the piece retains the eccentric structure of Susa’s original vision, with its cast of eight singers distinguished not by name but by number, each taking on an array of parts as the “entertainment in two acts” (Susa preferred that description over the word “opera”) gracefully moves through seven of Sexton’s fairy-tale poems. In its original form, Susa, with Sexton’s piercingly funny words as libretto, gives the sense that the opera is being performed in an asylum, with Sexton spinning her tales as the other patients take on the roles in her various personal fantasies. In the Cinnabar version, this notion is largely set aside for something less sensational but far richer.

On Joel Eis’ set of multilevel platforms wrapped here and there in sheets of clear plastic, there sits a single lounge chair on which Number Two (soprano Sara MacBride), as Sexton, reclines, inviting us into her mind as she uses the metaphors of fairy tales to bare her wittily bruised but amused soul, as if we are her therapists, invited into the dream world of Sexton’s neurotic reality.

Beginning with the story of “The Gold Key,” which Sexton makes clear is about humanity’s need to understand itself, the cast transforms into an array of characters, animals, objects, entities, edifices, insects and vegetables, all singing Sexton’s scalpel-sharp words. Bridging the worlds of fairy tale and taboo-busting modern life, those words are the chief wonder of the piece, as when Number Two sings, “No matter what life you lead, the virgin is a lovely number / Cheeks as fragile as cigarette paper, arms and legs made of Limoges, lips like Vin du Rhône / Rolling her china-blue doll eyes open and shut / Open to say, Good Day Mama, and shut for the thrust of the unicorn.”

Die Fledermaus this is not.

The cast is exceptionally strong. MacBride is magnetically watchful, overseeing much of the action with a laser intensity. As Number One, Jennie Lister skillfully employs her expressive face and elastic physicality in playing Snow White, Rapunzel, Gretel, Briar Rose and others.

Valentina Osinski, playing everything from a mirror to a snake, is sexy, slinky and, playfully comic. When singing together, as in the second act preamble to the story of Rapunzel, their pure, clear harmony is devastating. The rest of the group—Miguel Evangelista, Jeff Wang, Will Hart Meyer, Todd Donovan and Robert Stafford—also demonstrate range and inventiveness.

The orchestra, too, handles the challenges of the music with bravura aplomb. Being Anne Sexton must not have been easy, and she passes that trait down in this difficult and beautiful “entertainment,” a rare and not-to-be-missed journey into a one-of-a-kind world.