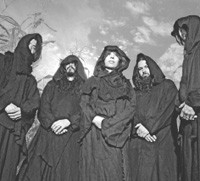 They Came in Robes

I was talking to someone last week about bands I’d recently seen, and when I mentioned that I’d been to a show featuring four metal bands, he was dumbfounded.

“Metal?” he asked with the kind of bewildered surprise that ordinarily accompanies references to all things ancient. “You mean, metal is still cool?”

Briefly, I toyed with attempting to explain to him the path that metal has taken since its 1980s heyday, from its theatrical beginnings through its recent flowering into a teeming musical river rife with countless creative tributaries, but I opted, instead, for the succinct. “As long as kids still ask for electric guitars for Christmas,” I told him, citing a tradition that shows no apparent sign of waning, “metal will always be cool.”

But lately, it’s gotten even cooler than usual, with bands like 3 Inches of Blood and Sonata Arctica keeping the fantasy/adventure flame alive, or with Mastodon and Isis pushing the genre into hitherto unexplored territories. In the last 20 years, metal has grown up with its fans, and a once-adolescent genre is now more interesting than ever. In fact, I’d venture to say that almost anyone could find at least one band located in a record store’s metal section that is downright listenable, if not thoroughly enjoyable.

As an example of this sheer variety, the band I had recently seen was Sunn o))), a drummerless concept troupe whose specialty is conjuring a lengthy, formless, trancelike drone, thinly distinguished from New Age music only by its use of distortion and absolute volume. At once progressive and primitive, the band’s music is so out of the ordinary, so much an obviously aberrant strain, that it acts as a mirror to magnify the genre, blemishes and all.

In concert, Sunn o))) exaggerate the first basic tenet of metal; i.e., to extract all doom from life and enshrine it in song. Even before the band’s first note, fog machines blanketed San Francisco’s famed Fillmore Ballroom stage with enough smoke to truly resemble the seventh level of Hades. Eight full-stack Sunn amplifiers, the source of the noises that make up the band’s “music,” as well as its name and logo, spanned the view, and when the ensemble’s five members took the stage, they appeared clad in hooded robes, brandishing devil signs.

Then it began–a deep, thundering onslaught, an extended exercise in amplifier misuse. On three guitars, the same low, evil chord was played over and over on three guitars and a Moog, very slowly, for five long minutes. This chord then eerily changed to an even lower chord, followed some time afterward by what sounded and felt like the Lowest and Craziest Chord in the World, fierce and rumbling, the clash of its wavering sound waves locked in a churning oscillation, dizzying to the system.

I thought for sure that I was going to throw up.

The movement of the music, the lights and the band members themselves all progressed at a glacial pace, and after 15 minutes, Sunn o)))’s singer began whispering unintelligibly nightmarish admonitions into the microphone. By that point, I was convinced that I was communing, in some way, with Lucifer himself. My rattled stomach’s nausea had given way to a hypnotic, full-body experience, and I submitted willingly to a long interruption in my own space-time continuum.

Of course, not everyone experienced the same transfixion, and near the end of the 35-minute set the crowd was visibly angry. Numerous hands thrust aloft with thumbs pointed downward–or, more popularly, middle fingers hoisted upward. The stage crew handed out earplugs to people in the front row, many of whom pleaded an end to the band’s barrage with the universal throat-cutting sign, and in the brief crack of silence between the band’s final note and the crowd’s tepid applause, a long-haired metalhead in a Metallica jersey barely squeezed in his shouted disgust: “You fuckin’ suuuck!”

Which proves that anyone, given a thorough listening, could find at least one band located in a record store’s metal section downright unlistenable, as well.