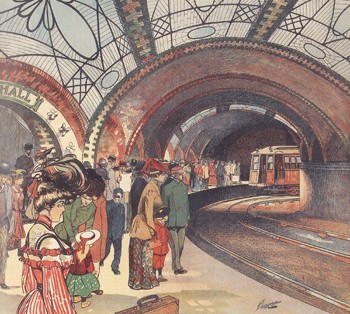 ‘The World on Sunday’

New York Underground: Louis Biedermann’s 1904 illustration captures the color and excitement of the new subway system of the era.

Suddenly, Jayson Blair’s confabulations for the New York Times don’t seem so terrible. When your nickname is “Miss Run Amok,” when one of your co-workers snidely refers to you as the “Fourth Estate’s Becky Sharp” (as Maureen Dowd did in an Oct. 22 hit piece), you know it’s time to check Craigslist for a new job. Earth to Judy Miller: Fox is always hiring talking heads. Maybe Ahmad Chalabi could write you a letter of reference.

The Times isn’t the only Times floundering. In The New Yorker, Ken Auletta dissected the departure of editor John S. Carroll from the Los Angeles Times because of meddling from the paper’s owners, the Tribune Company of Chicago.

Instead of fretting about the blogosphere, maybe newspapers should take a lesson from the past, as gorgeously displayed in novelist Nicholson Baker and Margaret Brentano’s The World on Sunday (Bulfinch Press; $50), a spectacular selection of pages reproduced from the New York World at the turn of the last century.

The World was the creation of Joseph Pulitzer (namesake of all those prizes Miller and the New York Times won for their tainted coverage of WMDs), who modestly called it the “greatest newspaper on earth.” Its three editions–the morning World, the Evening World and the Sunday World–boasted the largest circulation in, well, the world.

Baker (who wrote the novel Vox) and Brentano rescued a bound run of the World from the British Library, which was ditching its print holdings in a fit of modernizing. (Baker has long been scolding libraries for their wanton habits of discarding books, newspapers and card catalogs just because they’re old and in the way.)

The World on Sunday reproduces (at one-third size, about 9-by-11 inches) pages from the Sunday edition’s humor, comics, magazine and features sections. The book’s subtitle is Graphic Art in Joseph Pulitzer’s Newspaper (1898–1911), so the emphasis is on the illustrations rather than the sensationalist news coverage. Visually at least, today’s daily papers look drab and apologetic next to the tonal delights of the World.

Commanding the latest in printing technology, the World produced grand full-color illustrated stories. A page from 1903 depicts two paddle wheelers side by side at night for an article titled “A Steamboat Struggle for a Fortune: Sir Thomas Lipton Offers a Startling Prize for an Old Time Mississippi Race.” The subtlety of the reflected smokestack sparks on the wavering surface of the water is impressive by any era’s standards.

A two-page dazzler from April 1906 gives readers a chance to identify with the disaster in San Francisco by turning artist Louis Biedermann loose to imagine the toppling of New York’s skyscrapers and bridges in an earthquake. Biedermann, not content with a mere boxed illustration, uses his images of flames, smoke and structural disaster to encircle and overwhelm the text columns with tumbling masonry.

Indeed, Biedermann was a master of the exploded graphic. His cover art for a 1909 section about the future of transportation in Gotham features an airship gliding across an orange-sherbet sky above carefully labeled bridges, elevated lines and streetcar tracks. In the lower left-hand corner, a jagged chunk of blackness overlaid with pale blue shows the three different subway lines.

Best of all are the cartoons, caricatures and comic strips by master artists like George Herriman (in his pre–Krazy Kat days), George McManus (The Newlyweds and Bringing Up Father) and, most intriguingly, William J. Steinigans. Steinigans’ strip, The Bad Dream That Made Bill a Better Boy, follows the misadventures of a kid who endures surrealistic troubles at night before awaking and vowing not to misbehave again. It paved the way for Winsor McCay’s Little Nemo’s Adventures in Slumberland.