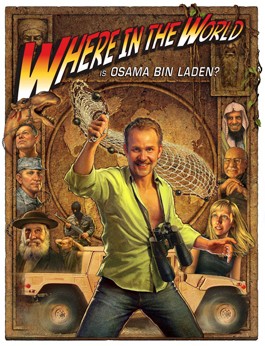 'Where in the World Is Osama bin Laden?' shows Morgan Spurlock as a tourist against terrorists

There comes a time in every humorist’s life when he has to ask himself, “Is my facetiousness actually contributing to global ignorance?” (P. J. O’Rourke should have asked himself that question 25 years ago.) In the new Morgan Spurlock documentary, the matter of whether Spurlock’s ignorance is comically assumed or genuine begins not to matter. This is an average-guy schtick that makes Michael Moore look like Noam Chomsky.

In Where in the World Is Osama Bin Laden? , Spurlock tours the Muslim world from Morocco to Pakistan, allegedly on the trail of the world’s No. 1 most wanted man, and what he discovers will flabbergast only the most ostrichlike solipsist.

After the stunt-eating documentary Super Size Me, Spurlock is trying here for something a little bigger. It’s growing-up time. His wife is pregnant with their first child, and in the interests of world peace for his offspring, Spurlock leaves her to gestate and prepares for a trip to the Middle East. He gets injections for yellow fever and malaria, and trains with a security company to learn what to do in case of kidnapping.

What he unveils could have been discovered with a fast web search. Spurlock goes to Egypt and learns that the nation is run by a corrupt government, propped up with U.S. cash. Has been for decades, apparently. In Israel, he finds that Palestinians are second-class citizens, kept behind walls. He learns that the Gaza Strip is terrifying, and that Tel Aviv gets bomb threats. (Admittedly, Spurlock gets in the general vicinity of harm’s way while touring with the U.S. Army in Afghanistan.)

Dish-dashed and bearded, Spurlock tours Saudi Arabia. This sequence is perhaps the best, due to the unapologetic religious totalitarianism of the kingdom. The most telling moment in the film is when Spurlock corners a pair of very nervous high school students being watched by their teachers. The students are not allowed to express an opinion or to answer Spurlock’s questions about Israel.

And that’s the documentary. It’s him and his crew catching the sleeves of shoppers, passersby and taxi drivers, while enjoying the world-famous hospitality of Islam. And if you think I’m being facetious about that hospitality, then this movie is just right for you. Where in the Worldis a long man-on-the-street interview in many Middle East streets. Repeatedly, Spurlock makes an ugly American out of himself by asking passersby where Osama bin Laden is. The most heartfelt answer comes from an anonymous Pakistani: “Fuck him and fuck America.”

The titles are amusing, a video game scored to hoe-down music, while an animated Spurlock uses a magic ‘stache to throttle the wily terrorist. Caricaturizing bin Laden might be a better response to terrorism than instituting panic and rainbow-colored alerts.

While one understands Spurlock’s desire to cut bin Laden down to size, Where in the World is more like an act of tourism than an act of exploration. There are libraries full of harder journalism on the subject of Middle East strife, containing work by everyone from Spurlock’s interviewee Peter Jouvenal to Fantagraphics’ Joe Sacco. The cartoonist/journalist Sacco is a much better starting point for answering that mind-boggling question, “Why do Arabs hate our freedom?”

Spurlock’s voyage in the name of his baby son is, for all its deliberate snark and silliness, as emetic as Sting asking if the Russians love their children, too.