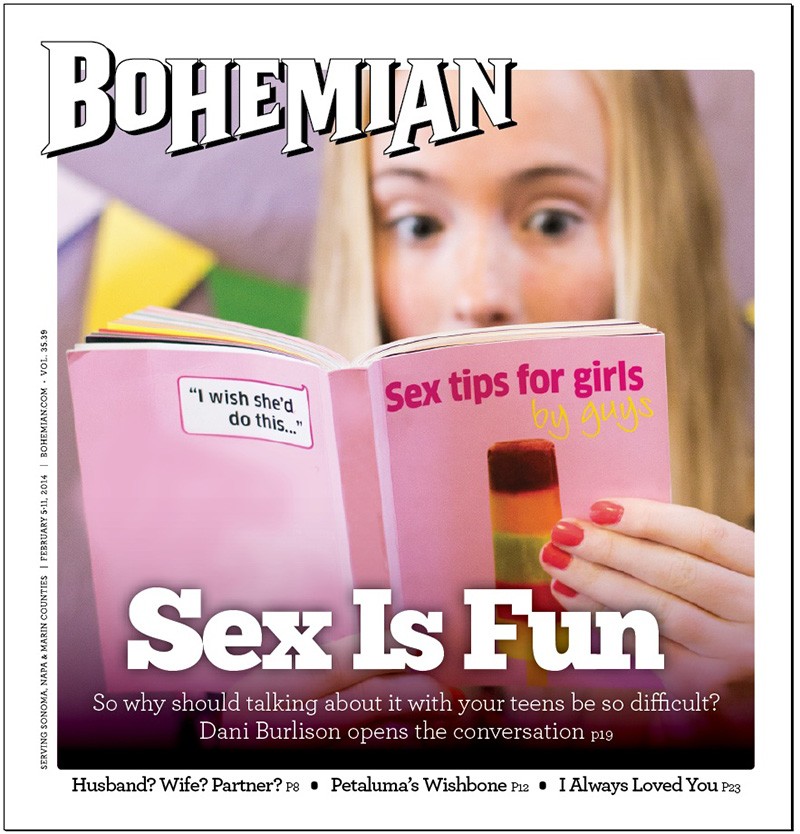 Think back to fifth or sixth grade. Remember that awkward spring afternoon when Mrs. So-and-So announced that the boys would be leaving the classroom with Mr. Teacher Man while the girls remained behind? Remember that man’s voice narrating the video, how it was oddly formal, as if he were dictating a special report on the 6 o’clock news?

A few kids at the back of the classroom giggled as the short, outdated film about periods and babies and endocrine glands blinked from the screen. After the video, the teacher cleared her throat and approached the front of the classroom, asking if there were any questions. Remember how silent that room was? How you could see red crawling up the ears of a few classmates? Remember wanting to know more? To see more? To feel more, like holding someone’s hand, or French kissing that kid you rode the bus with every day?

A couple years later, most of us experienced some variation of the dreaded sex-education class in middle school, but few of us were told how it really feels to be aroused or what kinds of emotions might come up when we really, really want to do it with Ralph Macchio or the lifeguard at the public pool. Mostly, we were told—with varying degrees of assertiveness—that all of the hot, raging, dizzying sexual desires of our youth should really just be saved for “later.” In other words, for marriage.

“It’s important to incorporate into your everyday parenting the assumption that your kids are going to grow up and be sexually active, relationship-having people and you [should] treat their sexual health like you treat all of the other parts of their health,” says sex-positive parenting expert Airial Clark.

According to Clark, sex-positive parenting is not just about lecturing our kids to use condoms so they don’t get pregnant or infected with STIs—which, however, we absolutely should be doing (the Centers for Disease Control (CDC) and Prevention reports that young people between the ages of 15 and 24 are infected with diseases like chlamydia and gonorrhea at a whopping rate four times higher than the rest of us). In fact, Clark says that talking to kids about safe sex happens to be the easiest aspect of having sex-related dialogue with our kids. But, she points out, there’s much more that we should include in our conversations, regardless of how squeamish it makes us.

Clark, who lives in Oakland with her two teen sons, runs the Sex-Positive Parent blog and offers private consultations and workshops where she coaches parents on having healthy conversations about sexuality with their kids. She recommends providing a specific style of sex education at home that deconstructs media and social messages about sexuality with kids in developmentally appropriate ways, an idea that at once seems awkward and practical at the same time.

Yet talking about sex can be tricky for parents with even the most open-minded of intentions. As Clark points out, they can either learn from us or from the myriad conflicting messages they receive through mainstream media.

Clark says she took a look at “all of the different things that kids are being told about heterosexuality and compulsive masculinity” and thought, “Wow, I’m gonna raise date-rapists if I don’t intervene. And I also wanted them to know that they were not immune to exploitation or immune to abuse. I wanted them to know ‘your body matters’ and make consent a personal issue, not some external issue that I think we see too much of, like ‘Oh, consent is something that girls have to worry about and boys don’t.’

“I wanted to take the gender out of that dynamic, so they know that human beings are vulnerable and bodies deserve respect and protection at all times, no matter whose body it is.”

In a country sharply divided over how we educate our kids about sex and contraception, this might all seem progressive and liberating to us here in California’s endless summer. Yet when it comes to actually talking to our kids about the realities of sexuality and the different ways relationships manifest when clothes come off and body fluids and feelings are involved, it’s only natural for parents to freeze up.

“It’s usually based in fear, and I try to validate them,” Clark says. “How can you raise children in this society and not be freaking terrified? You live in a rape culture. We feel super-helpless because victims are blamed. So if your kid does get hurt, the whole planet is gonna tell your kid that it’s their fault—and by extension, its your fault. And if you experienced any kind of sexual trauma, you were told it was your fault.

“So I try to tell them,” Clark continues, “‘Yeah, you should be scared. If you weren’t scared, I’d be worried. It’s normal.’ But the question is, what are you going to do with it? Are you going to allow it to shut you down? Or are you going to take steps to do self-care on your own end so you can be available to educate and support your kids?”

Several studies, including one conducted by the CDC, show that teens who talk with their parents about sex, relationships, birth control and pregnancy begin to have sex at later ages, use condoms and birth control more often if they do have sex, have better communication with romantic partners and have sex less often. It seems that parents—or other trusted adults—can have a huge impact on the sexual literacy of our kids. But according to Abigail Barajas, a youth program coordinator with the Santa Rosa Community Health Centers, parents aren’t having those much-needed conversations.

“There is no conversation going on between the kids and the parents,” she says. “It’s like, ‘I don’t want to talk about it,’ or if we do talk about it, it’s going to be me telling you how horrible it is and all of these horrible things are going to happen to you.’

The Santa Rosa Community Health Centers, which runs a clinic at Elsie Allen High School, is doing its best to fill in the dialogue gap with limited funding and through peer-education groups. But as Barajas points out, the rate of teen pregnancies and cases of STIs in Sonoma County has increased since her outreach and education program underwent major funding cuts three years ago—right at the very time she felt the programs were making a positive impact on incidents of teen pregnancy. Still, her efforts are making a difference, which she attributes to open, honest and normalized conversations about sexuality.

“We got money maybe 10 years ago to start a teen pregnancy-prevention program,” says Barajas, “and in the group that I started, [teens] came and we got all of the information we needed to start the teen services. Then after that, they didn’t want to go away. They wanted to learn more, they wanted us to teach them life skills so when they were out with their friends, they could help them.

“It has been an ongoing group for 10 years and I’ve had about 300 youth go through the group,” Barajas adds. “Some of them are now working in our center, and some of them went on to become educators with health education. I’ve seen that it works because they are constantly texting me and we are constantly in contact with them. It does work.”

Like Clark, Barajas doesn’t end the conversation with information about STIs, HIV and teen pregnancy prevention.

“We want to be positive about sex, but the mainstream schools, they want us to go in there and show pictures of nasty STIs, and that’s not really sex ed,” she says. “Most of all, I want them to be aware of their bodies, I want them to honor and respect their bodies. Otherwise, they’re not going to take care of themselves.”

Even with programs like Barajas’ and with information about sex more readily available from here to Poughkeepsie, what is most often heard about teens and sex are the accounts of golden boys on football teams drugging or intoxicating young girls and sexually assaulting them for fun. We all watched as newscasters gushed sympathy for the Steubenville rapists. The religious right continues to be militant in its anti-choice agenda, shaming teen moms and slut-shaming women who want access to contraception.

When a whopping 44 percent of rape victims are under 18, according to the Rape, Abuse and Incest National Network, it is crucial that kids are educated about consent and healthy boundaries. And that’s the hard part—teaching our kids about sex and self-respect, along with the joys and risks of emotional and physical intimacy, even if it scares the bejeezus out of us. But what about our sexuality as parents? Is it OK to disclose information about what we’re into, how many partners we’ve had or what really happened after that hiking date last week? Married, single, hetero, gay, bi, trans, poly—whatever our sexual orientation, how much is too much information for our kids? And how are we ever going to be able to look them in the face again if they discover we are into some really kinky stuff? Or that we have more than one lover? Or that we’re gay?

“There’s a big difference between educating and pushing it onto your kids. I’m definitely not advocating for anyone to push any kind of sexual agenda onto their children. That’s really the opposite of what I hope my work is doing,” says Clark. “But the baby boomer version of sexuality, the consumer culture around sex—it’s dysfunctional and it makes us feel bad when we’re real about sexuality because we don’t have enough examples.”

Clark says some of her coaching, which includes clients from as far away as Australia, India, Ireland and Eastern Europe, focuses on helping parents with coming-out strategies with their kids and how parents with other kinds of “alternative” sexualities can be open and honest about who they are.

“How do you talk about your sexuality,” Clark asks, “and not make it an exception in your own household, right? Because the dominant narrative is man-and-woman reproduction, but that’s never gonna happen if you’re gay, so why teach that first and then teach yourself as this weird secondary or periphery sexuality when it’s your fucking house and it’s your family? If you have an alternative sexuality, there’s ways to explain it where it doesn’t violate your child’s boundaries.”

And of course there’s the question of how single parents can fit in some boot-knocking without traumatizing the kids. When do we introduce our kids to a new lover? Or do we? Is it OK for our kids to hate someone we’re sleeping with—or do they even need to know we’re getting laid?

It’s all contextual, Clark says. And like everything else in the great wild world of parenting, we will make mistakes. We’ll screw up and embarrass them and scare them and totally gross them out when they see us making out in the car after a date. Hopefully, though, we can push through those panic attacks we have about our kids having sex and learn to enjoy an occasional (or, God willing, frequent) sexcapade with one or more consensual, orgasm-giving partners.

And when all is said and done, maybe they’ll look back and feel grateful for all of the hard work we’ve done in raising them, even if they’re creeped out just by knowing that we’re getting some, too.

Next ArticleFeb. 7: Conspiracy of Beards at 142 Throckmorton