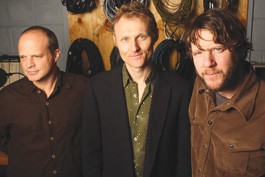 Medeski, Martin & Wood lay it down

Teenagers turn 18 and get tattoos, but bands like Medeski, Martin & Wood turn 18 and get box sets. A badge of honor for any band, but especially for one as risk-taking and exploratory as the avant-soul-jazz trio, Radiolarians isn’t your ordinary box set repackage job. The set features five CDs, two LPs and a DVD of material recorded over the last few years, and it’s as vibrant and alive as MM&W were when they burst on the scene in the 1990s. For the band, the premise was simple: write a set of music, play the hell out of it on tour, and get home and record it while it’s well-oiled.

Radiolarians is a limited set sold on the group’s current West Coast tour, which hits the Mystic Theatre in Petaluma on Feb. 23. It’s an 18-and-over show, which means that those in their late teens learning how to play piano, organ, bass or drums can witness three masters of their game. From the early soul-jazz grooves of the band’s early records to a more improvised approach on their Blue Note output, MM&W have never been short of an inspiration—with a backbeat you can’t lose.

Rooted in the group’s jazz leanings is a need to commingle nightly onstage, and MM&W’s marriage hasn’t turned stale, primarily because each member is rabid about side projects. Keyboardist John Medeski has been recently playing with guitar maniac Marc Ribot and a slew of Russian musicians; drummer Billy Martin is conducting a forum on drummers-as-leaders next month; and bassist Chris Wood plays and sings folksy bluegrass with his brother in the Wood Brothers. After each dalliance, their union is stronger and richer than ever. See for yourself when Medeski, Martin & Wood return on Tuesday, Feb. 23, at the Mystic Theatre, 23 Petaluma Blvd. N., Petaluma. 8pm. $30&–$32. 707.765.2121.